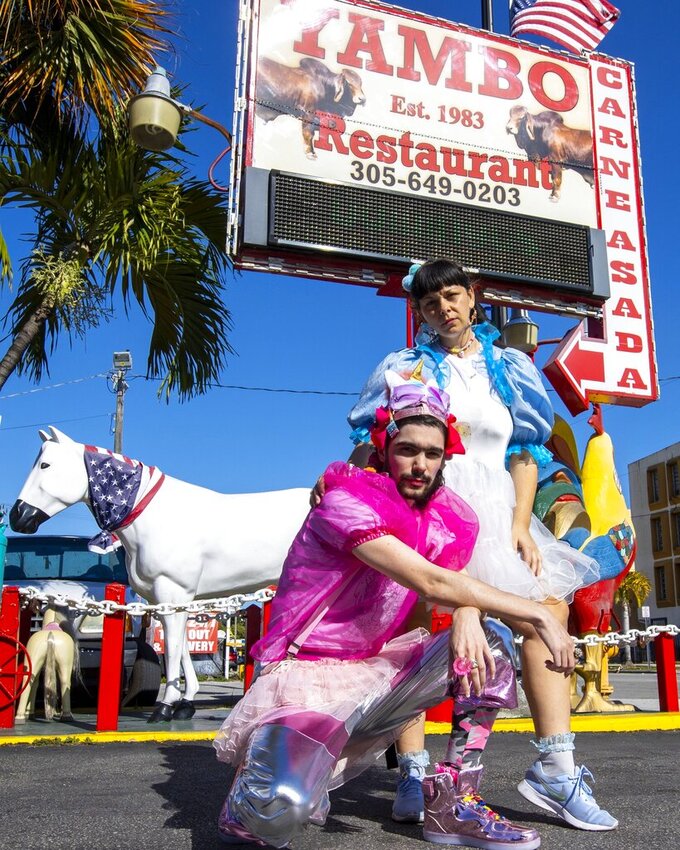 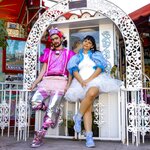 MIAMI (AP) — A hard reggaeton beat blasted through the speakers on the streets of Little Havana’s Calle Ocho as a crowd danced around two local reggaetoneras. It was a standard night of Gay8, the annual LGBTQ festival.

Then came the milk.

The reggaeton duo was performing their new song, a catchy old-school bop called “Dame Leche,” when two grown men dressed in diapers did just that. They poured jugs of milk on themselves and danced as Liz Ferrari and Maripussssy sang the suggestive chorus, “Dame dame dame leche, tengo tengo tengo hambre.”

The crowd ate it up. “I want more!” they yelled.

This is Niña, a Miami-based, queer, femme reggaeton duo with a penchant for childlike aesthetics. They perform in tutus, glitter eyebrows and butterfly hair clips.

They’re not your average reggaetoneras. They don’t want to be.

Niña is the brainchild of visual and performance artists Liz Ferrer and Bow Ty, otherwise known as Liz Ferrari Ouch and Maripussssy, respectively. In a male-dominated genre often criticized as misogynistic, Niña creates reggaeton songs from a feminine, queer point of view.

The story behind Niña is as unique as Liz and Bow’s outfits. Niña is just one of several art projects that Liz and Bow collaborate on, and the band’s ethos has captured the attention of Miami’s arts institutions, like Oolite Arts. Though the two artists may look different from their male counterparts, their do-it-yourself approach hearkens back to reggaeton’s underground, low-budget roots.

After dropping “Dame Leche,” their first single and music video in March, the band is focusing on the rest of their upcoming visual album. This month, they’re dropping “Zap,” a dembow-inspired bop about zapping away your problems. “There’s all these genuinely fun and cool things about reggaeton,” Bow said. “We just want to do it without the feeling of machismo.” “It’s needs to open up a bit,” Liz added.

THE ORIGINS OF NIÑA

Liz and Bow met at a party in Chicago in 2015. Liz, who studied theater in college, was in town after an art residency and Bow was hired to perform at the party -- as a human lamp.

At the time, Liz was curating a performance art festival. She approached Bow and gushed over how cool they looked as a lamp and told them to come to Miami. It was a one-sided conversation, though. Bow, still acting like a lamp, didn’t say anything. But they were down.

A mutual friend formally introduced them, and the two filled a spreadsheet with ideas for collaborations. Besides their individual art practices, Liz and Bow have dedicated much of their time to checking off that list.

Liz and Bow share a nuanced relationship with gender identity, a theme they explore in their projects.

Bow said that they don’t spend too much energy correcting random people who refer to them as a man. “I deal with the world in different genders in different situations,” Bow said.

“In general, I think of myself as a girl or as femme, but a lot of other people might not see me that way.”

The two laughed at how neither of them had a straightforward answer about their gender. “It’s complicated,” Bow said.

Liz and Bow know how to make an entrance -- even at a Nicaraguan restaurant. They walked in Yambo, a popular spot in Little Havana, in frilly pink and blue looks and got in line to order.

Bow is 32, bearded, tall and soft spoken. Their hair was tied into pigtails with pink bows and they wore a unicorn sleeping mask as a headband. Their tutu had suspenders, their sneakers lit up and an old Christmas ornament dangled from their necklace.

Liz is 37, Cuban-American, short and louder than Bow. Her dark hair was tied into a high ponytail, her sleeves were puffy and her baby blue frilly socks matched her baby blue sneakers. Inside her gold hoop earrings was her stage name: Liz Ferrari.

A little boy stared and smiled. His mom glanced over her shoulder. An old man on a bike wolf whistled. But Liz and Bow didn’t really care. Yambo is a chill spot, they said. Over a plate of queso frito and tostones, the two recalled the last few years of their friendship and collaboration.

They had an art residency in Colombia working with children as family-friendly duo LizN’Bow. They ran an “experimental spa” in a formerly abandoned mall. They even made a telenovela starring Liz’s abuela Olga Ferrer, a natural performer who is not shy about her crush on their friend, Otto.

But by 2018, they still hadn’t checked off one line on their list: girl band. Then came a phone call from Chicago.

Liz and Bow’s love for reggaeton was sparked while driving around Miami. Liz used to be an avid classical music listener, but her favorite station switched to religious music. She started playing reggaeton instead.

The two have been hooked ever since. They’d ride around in Liz’s car bopping their heads to Daddy Yankee, Ozuna, Anitta, Wisin y Yandel and their favorite, Bad Bunny.

Around that time, in the fall of 2018, some friends in Chicago called with a request. They were planning a queer art festival and were looking for submissions. That was the push they needed to finally start their girl band and finish the catchy chorus they came up with: “Dame dame dame leche.”

“Dame Leche” was never supposed to be a real song, Liz said. It started out as a joke, but then they had one month to finish three songs and plan a performance. Niña was born.

“With everything we do, it might start out as a joke,” Bow said, laughing. “There’s a funny, humorous element to it, but then we’re like, ‘no, we got to take this seriously.’”

Niña continued to focus on live performances instead of recording and uploading their songs to streaming services, a practice most emerging artists do to gain a following. The shows they book have been “very varied,” Liz said, especially before the pandemic.

They’ve performed at Gay8 for the LGBTQ community. They’ve performed at the Institute of Contemporary Art in the Design District and a local film festival for artsy audiences. They’ve been to bars like Gramps in Wynwood and Blackbird Ordinary, a Brickell spot with a young, straight crowd. When they traveled to Puerto Rico, they gave a show to a mixed group.

Liz recalled a particularly strange gig when Niña was booked to perform at a bar with folk and indie musicians. Liz asked the event organizer, “Why would you book us, bro?” He replied, “Because I love Niña, man!”

Regardless of the venue or audience, Liz and Bow said they’ve been well-received everywhere they go. The duo even planned a Caribbean tour that was canceled because of the pandemic.

In one performance, called Niñalandia, the duo threw a full-blown quinceañera party. Everyone was free to dress up in poofy gowns, sing, dance and eat birthday cake. Though Niña performances are joyful and youthful, the group also aims to subvert patriarchal traditions around femininity; Anybody can have a quinces, regardless of gender.

Niña continues to subvert expectations with their songs. Naysayers may expect a feminist band to steer clear of raunchy lyrics, but “Dame Leche” doesn’t shy away from sexual innuendos.

“Dame Leche” isn’t entirely about milk, kind of like how Daddy Yankee’s “Gasolina” isn’t an ode to fossil fuels. The song oozes with nostalgia, and the music video is a campy, over-the-top, overly saturated visual feast. In the video, edited by Bow, Liz Ferrari and Maripussssy are trying to buy milk at the corner store only to find the fridges empty.

Miami’s supply of milk was stolen, and it’s up to them to find it. Cue the music.

As homophobia and transphobia remain rampant in Latin America, artists like reggaeton superstar Bad Bunny, known for experimenting with feminine clothing and acrylic nails, have promoted acceptance to a massive audience. In a 2020 performance on The Tonight Show with Jimmy Fallon, Bad Bunny wore a black skirt and a T-shirt referencing the murder of a transgender woman in Puerto Rico.

Some queer reggaeton artists have been able to make headway, like Villano Antillano, a transgender Puerto Rican rapper who performed at Wynwood Pride 2021.

In Miami, Niña is one of a kind, said Esther Park, the vice president of programming at Oolite Arts, a local arts nonprofit.

In 2019, Liz was granted $12,000 from The Ellies, Oolite’s annual awards for local artists, to create a video album for Niña. Park said that it’s unusual for visual artists to create a reggaeton band as a project, but “it’s very Liz.” Niña is part of a larger conversation about sexuality, gender and culture that younger generations are eager to have, Park said.

“This project that Liz is doing with Bow is indicative to the times,” Park said. ”If she did this project 10 years ago, it may not be well embraced, but now, I don’t know, maybe she’ll get a Billboard Top 100 hit.”

Despite sexism, the tides are changing. Niña isn’t a criticism of reggaeton as a genre, Bow said, but rather an inclusive addition to the culture.

“It’s a good moment to do it,” Bow said. “People are ready to start accepting that machismo itself is not the greatest thing.”

Niña is a testament to reggaeton’s ubiquity. The genre is for everybody, not just cisgender straight men. Liz and Bow’s girly lyrics and visuals are a reminder to not take life too seriously, even when you’re all grown up.

With the power of glitter and friendship, Liz and Bow do much more than challenge gender norms. They entertain.

“We want it to be for everyone,” Liz said. “It’s a celebration of reggaeton as a whole, and it’s opening doors for other possibilities of who can be in that world.”