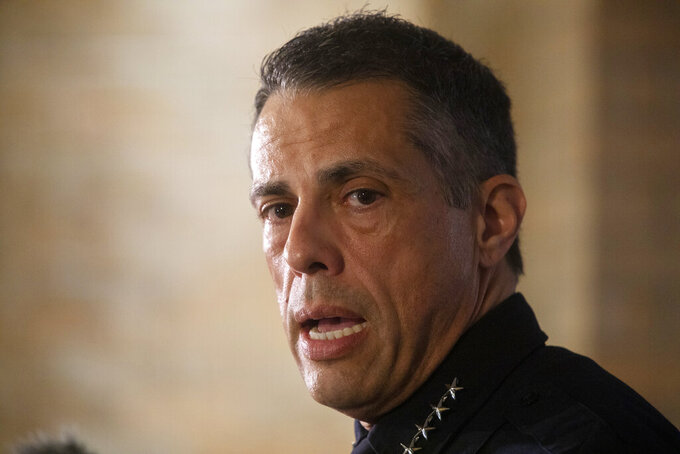 Ana Ramirez, ASSOCIATED PRESS
FILE -- Interim Austin Police Chief Joseph Chacon is shown in this June 12, 2021 file photo during a news conference in Austin, Texas. Chacon was named Wednesday, Sept, 22, 2021 as the permanent choice position. Chacon has been the interim police chief since the retirement of former Chief Brian Manley amid a reckoning over racial injustice and use of force in law enforcement. Chacon's appointment must still be confirmed by the City Council. (Ana Ramirez/Austin American-Statesman via AP, file)

AUSTIN, Texas (AP) — After serving as interim police chief for Texas’ capital city since March, Joseph Chacon was named Wednesday as the permanent choice for the top spot in Austin.

The appointment of Chacon, whose career with Austin police has spanned over 20 years, was announced by City Manager Spencer Cronk. It comes after a nationwide search for a new chief.

Chacon has been interim police chief since the retirement of former Chief Brian Manley amid a reckoning over racial injustice and use of force in law enforcement.

Chacon, who served as assistant chief in Austin for almost five years before being named interim chief, said he was “extremely excited and humbled” by the opportunity.

Chacon's appointment must still be confirmed by the City Council, which is set to place an item on the appointment on next week's agenda.

Manley, chosen to lead the department in 2018, had been at the center of ongoing criticism following a fatal police shooting in April 2020 of a man driving away from officers and controversial uses of force by officers during protests over the death of George Floyd, who died in police custody in Minneapolis in May 2020.