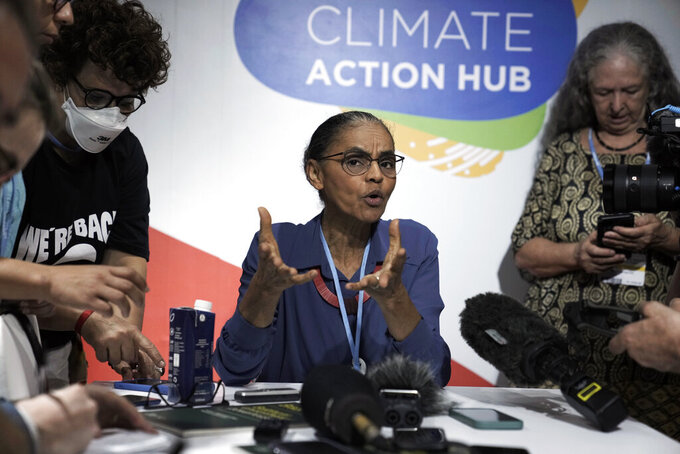 SHARM el-SHEIKH, Egypt (AP) — Marina Silva, a former environmental minister and potential candidate for the job again, on Saturday brought a message to the U.N. climate summit: Brazil is back when it comes to protecting the Amazon rainforest, the largest in the world and crucial to limiting global warming.

Silva said the fact that da Silva was coming to the summit, months before he assumes power Jan. 1, was an indication of the commitment of his administration to protect forests and take a leadership role on combating climate change. Da Silva was expected to meet with several heads of delegations.

“Brazil will return to the protagonist role it previously had when it comes to climate, to biodiversity,” said Silva, who spoke with reporters at the Brazilian Climate Hub.

Bolsonaro, who was elected in 2018, pushed development of the Amazon, both in his actions and rhetoric. Environmental agencies were weakened and he appointed forest managers from the agribusiness sector. The sector opposes the creation of protected areas such as Indigenous territories and pushes for the legalization of land robbing. The deforested area in Brazil's Amazon reached a 15-year high from August 2020 to July 2021, according to official figures. Satellite monitoring shows the trend this year is on track to surpass last year.

Upon winning the October elections, da Silva, president between 2003 and 2010, promised to overhaul Bolsonaro's policies and move toward completely stopping deforestation, referred to as “Deforestation Zero.”

That will be a huge task. While much of the world celebrates policies that protect the rainforest in Brazil and other countries in South America, there are myriad forces pushing for development, including among many Amazon dwellers. And Da Silva, while much more focused on environmental protection compared to Bolsonaro, had a mixed record as president. Deforestation dropped dramatically during the decade after Da Silva took power, with Marina Silva as environment minister. But in his second term, Da Silva began catering to agribusiness interests, and in 2008 Marina Silva resigned.

In recent weeks, news reports in Brazil have focused on a possible alliance between Brazil, the Congo and Indonesia, home to the largest tropical forests in the world. Given the moniker “OPEC of the Forests,” in reference to the Organization of the Petroleum Exporting Countries and the way they regulate oil production, the general idea would be for these three countries to coordinate their negotiating positions and practices on forest management and biodiversity protection. The proposal was initially floated during last year's climate summit in Glasgow, Scotland, according to the reports.

When asked for details on any alliance, including whether it might be announced during the second week of the summit, Silva demurred, making clear that any such announcement wasn't hers to make.

“We don't want to be isolated in our protection of forests,” she said more generally, adding that Brazil wanted forest management to be coordinated among “mega forest countries" but wouldn't try to impose its will.

Silva won a seat in Congress in October's elections. A former childhood rubber-tapper who worked closely with murdered environmentalist Chico Mendes, she has moral authority when it comes to environmental issues and is one of a handful of people talked about as a possible minister in da Silva's government.

While making clear she was not speaking for the president-elect, Silva shared details of what she thought would be part of the next administration. She said Brazil would not take the position that it “had to be paid” to protect its forests, a position that Bolsonaro's administration has taken.

Brazil would not focus on the kinds of large energy projects that it did during da Silva's first terms, like a major hydropower dam, but instead would focus on a shift to renewable energies like solar. Along the same lines, she said there would be a push to transition state oil company Petrobras from a focus on oil to a focus on renewable energies.

“We need to use those (oil) resources, which are still needed, to do a transition to other forms of energy and not perpetuate the model” of a company focus on oil, she said.

Silva said Brazil would participate in carbon offsets markets, but that they needed to have “rigorous” oversight, something that arguably isn't the case currently. Such carbon credits allow companies and countries to offset some of their carbon emissions by paying for activities that capture carbon, like planting trees.

Silva also said she had proposed a government body to focus on climate change, which presumably would be in addition to the environmental ministry. She said the idea would be to have close regulation of climatic changes so things could be addressed in real time, such as greenhouse gas leaks, or weaknesses in climate policy. She made a comparison to the way that governments always keep a close watch on inflation.

“The idea is to avoid climate inflation," she said.

Peter Prengaman, the AP's climate and environment news director, was Brazil news director between 2016 and 2019. Follow him on Twitter: twitter.com/peterprengaman