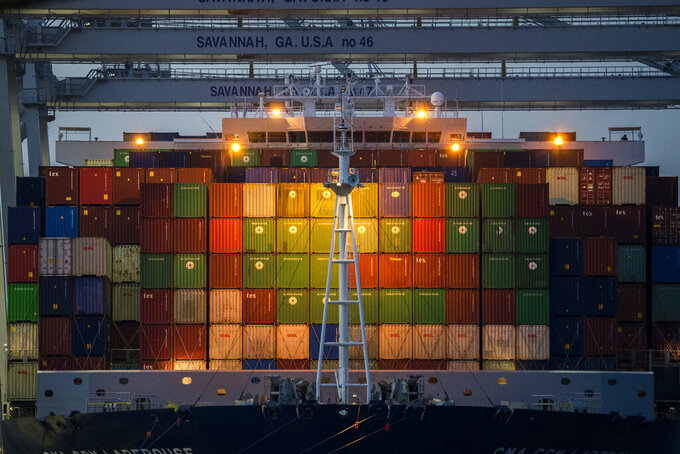 WASHINGTON (AP) — The U.S. economy expanded at a 6.7% annual pace from April through June, the Commerce Department said Thursday, slightly upgrading its estimate of last quarter's growth in the face of a resurgence of COVID-19 in the form of the delta variant.

The government's estimate of growth in the second quarter — its last of three — was up from its previous estimate of a 6.6% annual pace that will likely mark a high point for the economy's expansion this year as the virus slows some activity, government support programs wind down and manufacturing supply-chain issues persist.

Thursday’s report from the government showed that the nation’s gross domestic product — its total output of goods and services — accelerated from a 6.3% annual rate in the first three months of the year.

A key factor in the upgraded growth estimate for the April-June quarter was a slightly higher level of consumer spending, which accounts for roughly 70% of economic activity. Consumer spending grew at a 12% annual rate, the fastest expansion since a surge in the third quarter last year, when the economy began to re-open.

Stronger export sales also added to the increased growth estimate for the second quarter. Exports rose at an annual rate of 7.6% after having fallen in the first quarter. Business equipment investment was also up from the government's previous estimate, expanding at a solid 12.3% rate.

These gains were partly offset by a sharper increase in imports, which subtract from economic growth. Imports rose at a 7.1% annual rate in the second quarter.

The report showed that an inflation measure tied to GDP that excludes volatile energy and food costs rose 3.4% over the past year. That is the fastest such pace since 1991 and well above the Fed's 2% goal for annual inflation.

During the first half of the year, the economy was being boosted by vast federal support for the recovery from the pandemic recession — trillions of dollars in individual stimulus payments, expanded unemployment aid and help for small businesses.

Now, with those programs winding down or having already expired and with the delta variant’s spread having discouraged some people from flying, shopping and eating out, most economists say they think growth is slowing in the July-September period. Most have estimated an annual rate of around 4% for the current quarter.

For 2021 as a whole, a panel of forecasters with the National Association for Business Economics has projected growth of 5.7%. That would mark a solid bounce-back from a 3.4% annual drop last year, when the economy was in the grips of the pandemic. And it would represent the most robust calendar-year growth since a 7.2% surge in 1984, when the nation was emerging from a deep recession.

Lydia Boussour of Oxford Economics said she foresees 5.5% growth for 2021 as a whole and 4.4% growth in 2022 — twice the average calendar-year expansion of the past decade.

“We expect a slowly improving health situation, solid household finances, a rebuild of inventories and additional fiscal stimulus will support growth momentum in 2022,” she said.

An even stronger pace of expansion, though, had been expected for this year. But the surge in COVID cases has weakened growth, hiring and consumer confidence. In addition, persistent supply chain problems have shrunk production at auto plants and other manufacturers, further reducing growth. The supply chain problems are connected to the global surge in the pandemic, which has slowed production of computer chips and other vital components made in Asia.

“The delta variant became a bit of a sandstorm keeping the economy from growing faster,” said Sung Won Song, economies and business professor at Loyola Marymount University in Los Angeles. “The virus contributed to supply shortages and labor shortages.”

Most economists expect the economy to grow at a rate of at least 4% next year. That would amount to twice the modest average annual gains during the decade after the 2008 financial crisis, when the economy engaged in a long, slow and grinding recovery.

Next year’s growth could benefit if Congress manages to break an impasse and approve a $1 trillion bipartisan infrastructure bill as well as $3.5 trillion social spending and climate measure. Prospects for both measures remain hazy. But even a pared-down spending measure would likely provide some economic stimulus.

Analysts also expect the delta variant to impose a lesser drag on growth next year.

“Delta does appear to be winding down, and even if it does not go away, each successive wave should be less destructive,” said Mark Zandi, chief economist at Moody’s Analytics. “I expect the economy, which is very closely tied to the path of the pandemic, will rebound as people go back to restaurants and start traveling again.”

Zandi predicted that the economy will be strong enough over the next 18 months to restore full employment, with an unemployment rate of around 3.5%, by spring of 2023. That would represent a three-year recovery in the labor market, which lost 22 million jobs after the pandemic tore through the economy in March and April of 2020. That would mark an unusually swift recovery. After most recessions, the economy usually takes five or six years to achieve a full jobs recovery.

The Federal Reserve has been nurturing the economy through ultra-low interest rates and $120 billion in monthly bond purchases that are intended to hold down long-term loan rates. But last week, the Fed signaled that it would likely start reducing those purchases as soon as November.

By late 2002 or early 2023, the Fed is expected to begin raising key short-term interest rate, which influences many individual and corporate loans.