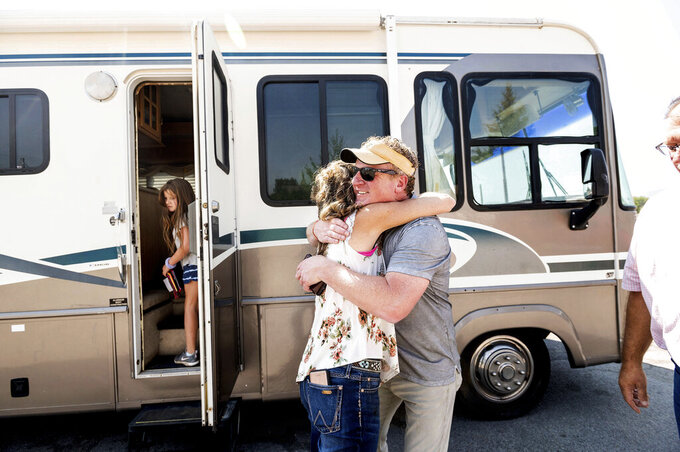 QUINCY, Calif. (AP) — Clutching a bag full of duct tape and snacks, Woody Faircloth climbs aboard a motorhome complete with carpet and drapes. At his side, his 9-year-old daughter, Luna, quizzes a family who has just donated the recreational vehicle, appropriately called Residency. In the distance, above hills dotted with sagebrush, smoke billows from the second-largest wildfire in California history.

Father and daughter drive west an hour where they deliver the 35-foot (11-meter) RV to its new owner — a volunteer firefighter who lost his home in August when the Dixie Fire leveled most of historic downtown Greenville, a tiny Northern California mountain town dating to the gold rush era.

The vehicle is the 95th that Faircloth has delivered to wildfire victims. Run entirely on volunteer efforts and donated RVs, the nonprofit EmergencyRV.org fills a gap for victims who often wait months for emergency housing, Faircloth said.

“We’re grassroots; we can move a lot faster than that. It’s people helping people. … We can get there almost immediately,” he said.

And Faircloth has a long list of people who need help. Thousands of wildfires have burned in California and the U.S. West this year as a historic drought makes the flames harder to fight.

His mission began Thanksgiving week in 2018. Spending the holiday alone with Luna at home in Denver, Faircloth watched news coverage of a man fleeing in an RV as the nation's deadliest wildfire in a century — the Camp Fire — burned his California home. Despite losing his house, the man was grateful to have the RV to call home for Thanksgiving. That struck Faircloth.

He had never been in an motorhome before, but he turned to Luna and asked, “Why don’t we get an RV and drive it out there and give it to a family that lost their home? What do you think about that?”

Her reply: “Aw, Dad, God and Santa Claus are gonna be proud of us.”

Within three days, with Luna riding shotgun, Faircloth steered west from Denver in a $2,500 motorhome he found on Craigslist. They celebrated Thanksgiving on the road and delivered the vehicle the next day to a victim of the Camp Fire, which nearly destroyed the town of Paradise and killed 85 people.

As social media posts about the trip spread, donors started offering Faircloth their RVs. Some offered to deliver the vehicles themselves, but Faircloth makes many of the drops personally.

He tries to schedule the trips on weekends but often dips into vacation time from his full-time job at telecom company Comcast. Faircloth has traversed thousands of miles over the past three years, often with Luna at his side. Last year, she joined him more often as COVID-19 precautions had her going to school remotely.

While those who are given RVs own them outright, Faircloth estimates 5% to 10% return them once they're on their feet so they can be donated to other fire victims.

Faircloth and Luna spent three weekends in the last two months making the 20-hour drive from Denver to rural Northern California, where the more than 1,500-square-mile (3,898-square-kilometer) Dixie Fire has destroyed 1,329 homes, businesses and other buildings since mid-July. They have delivered three RVs to firefighters and one to a sheriff’s deputy.

One of them was firefighter George Wolley. He was battling the Dixie Fire on Aug. 4 when the flames, whipped by strong winds and bone-dry vegetation, descended from the hills and leveled most of central Greenville, including Wolley's house.

“We fought the fire until we couldn’t fight it no more. We couldn’t stop it. We did our best," he said.

Wolley parks the RV near an air base where he's still helping load fire retardant into air tankers to battle the blaze.

“Before I got that RV, I felt like I was a burden on everybody that helped me,” Wolley said. “I slept a lot in tents and in my car. It gave me a place to go.”

Faircloth and Luna recently delivered their 95th motorhome to John Hunter. An assistant chief with the Indian Valley Fire Department, Hunter has been fighting blazes for 46 years. The same day Wolley’s house burned, flames destroyed Hunter’s home and Hunter Ace Hardware, the Greenville store his family has operated since 1929. It also gutted a building he owned next door, a former medical clinic where the 69-year-old was born.

Hunter and his girlfriend, Kimberly Price, 57, will call the RV home as they decide whether to rebuild or start over elsewhere.

“It’s been really hard because our town’s gone, and this is all John’s known all his life,” Price said, wiping away tears as she watched a video of the family who donated the motorhome.

Price said they will park in a lot near Greenville Junior/Senior High School, one of the few buildings still standing in the town center. That will allow her to keep visiting ruined homes each day to feed cats that were left behind as owners evacuated.

Although Faircloth said it’s challenging to balance work, family and his nonprofit, he hopes to expand the volunteer effort. He envisions staging RVs in hurricane and fire zones in the future to respond even faster during disasters.

For now, there are more than 100 families on EmergencyRV.org’s waitlist. He plans to drive to California in the next two weeks to make his next delivery.