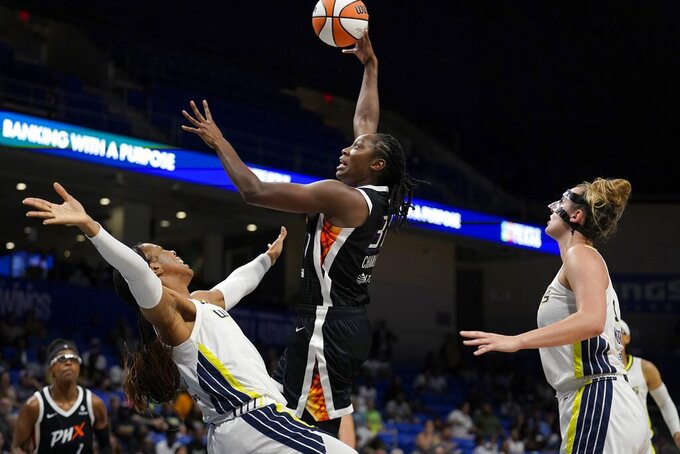 PHOENIX (AP) — Tina Charles' stint in the desert was a short one.

The Phoenix Mercury announced Saturday they agreed to terms on a contract divorce with Charles after 18 games.

“After discussions with Tina and her agent, it was best for both parties to go our separate ways at this time," Mercury general manager Jom Pitman said. "Due to circumstances both in and out of our control, our season has not gone according to our plan, and we will continue to pursue all avenues for improvement.”

The WNBA's leading scorer last season, Charles signed with Phoenix in February, a day after the Mercury added Diamond DeShields in a three-team trade with Chicago and New York. The additions were expected to give the Mercury a huge boost to a roster that already had Diana Taurasi, Britney Griner and Skylar Diggins-Smith.

Griner has been detained in Russia since Feb. 17 after authorities at an airport outside of Moscow said she had vape cartridges containing cannabis oil in her bag.

The Mercury have struggled with injuries and without Griner in the lineup, entering Saturday's game against Dallas near the bottom of the standings at 6-12 after reaching the WNBA finals last season.

Charles, the 2012 WNBA MVP, was Phoenix's second-leading scorer at 17.3 points per game while grabbing 7.3 rebounds.