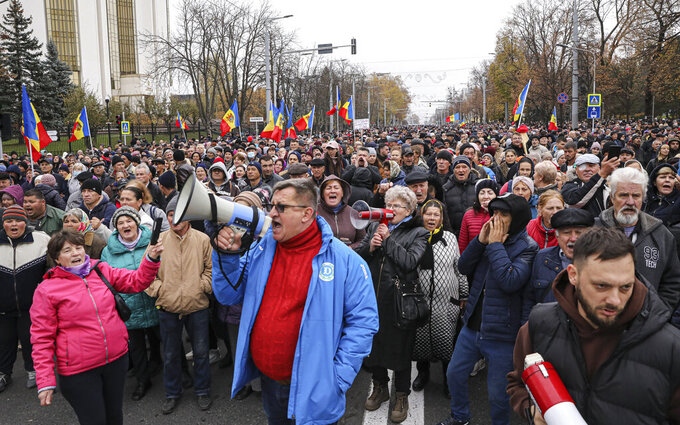 CHISINAU, Moldova (AP) — Two Moldovan oligarchs who are allegedly implicated in a one-billion-dollar bank fraud and other illicit schemes have been added to a new U.K. sanctions list, Britain's foreign secretary said Friday.

The two men, Ilan Shor, and Vladimir Plahotniuc, fled Moldova in 2019 as they faced a series of corruption charges. They were among 30 people around the world sanctioned Friday by the U.K., Foreign Secretary James Cleverly said in a statement.

Moldovan authorities allege that both are implicated in a $1 billion dollar bank theft from a Moldovan bank in 2014. At the time, the sum was the equivalent of about one-eighth of annual GDP in what is one of Europe’s poorest countries.

Moldova’s Prime Minister Natalia Gavrilita hailed the U.K. move, saying that “the circle around the corrupt and thieves in the country is tightening.”

“We are determined to ensure all conditions for corrupt politicians to be investigated,” she told a press conference, adding that she wants Moldova "to ... become a country where European values and standards are lived realities and not a distant dream.”

Shor is a businessman born in Israel — where he has resided in exile since 2019. He also leads the populist, Russia-friendly Shor Party, which in recent months has organized large protests in Moldova's capital, Chisinau, against the pro-Western government.

Shor also is accused of bribery to secure his position as chair of a Moldovan bank in 2014, and was recently named on a U.S. State Department sanctions list as working for Russian interests and to undermine Moldova’s bid to join the European Union.

In June, Moldova — a former Soviet republic of 2.6 million sandwiched between Romania and Ukraine — was granted EU candidate status.

The other sanctioned oligarch, Plahotniuc, is a powerful businessman and former politician charged with “capturing and corrupting Moldova’s state institutions,” Cleverly’s statement read.

In June 2019, Plahotniuc fled to the U.S. from Moldova after failing to form a government with his Democratic Party. In 2020, the U.S. declared him persona non grata and his whereabouts are now unknown to authorities. He too was included on the recent U.S. sanctions list.

Moldovan President Maia Sandu thanked her country’s external partners on Friday for their "support in our fight against corruption that has plagued our state and citizens.”

Moldova has taken a distinctly Western-oriented path over the last year, and officials are pushing to clean up corruption and reform the judiciary. It ranked 105th out of 180 countries in Transparency International’s 2021 Corruption Perception Index.

The U.K. said Friday it will freeze any assets owned by Shor or Plahotniuc in the U.K. or its overseas territories. British citizens are also barred from economic transactions with the pair, “who are henceforth denied entry to the UK.”