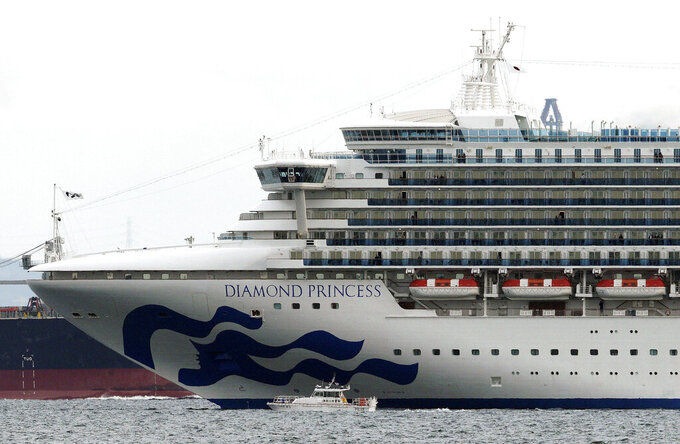 TOKYO (AP) — Japan will lift a more than 2 1/2-year ban on international cruise ships that was imposed following a deadly coronavirus outbreak on the cruise ship Diamond Princess at the beginning of the pandemic, transport officials said Tuesday.

The Transport Ministry said cruise ship operators and port authorities' associations have adopted anti-virus guidelines and that Japan is now ready to resume its international cruise operations while receiving foreign ships at its ports.

“Japan is now ready to start receiving international cruise ships again,” said Transport and Tourism Minister Tetsuo Saito. “We will create an environment that allows tourists to enjoy their cruise without worry while in Japan.”

Exact schedule for cruise ships has not been announced. Among the first is a Japanese ship departing from Yokohama in December for Mauritius and returning in January.

Japan has barred international cruise ships since March 2020, after the outbreak on the Diamond Princess forced 3,711 passengers and crew members to quarantine on board for two weeks, during which 13 people died and more than 700 others were infected.

Japan chose to isolate the crew and passengers while keeping them on board as a way of border control, but was also criticized for turning the ship into a virus incubator.

Cruise ship operators are expected to discuss with local authorities further details about their port entry plans. Japan’s resumption of international cruise liners comes more than a year after they returned to the United States and Europe.

Under the new guidelines, all crew members must have three received three coronavirus vaccine shots while most passengers must be vaccinated at least twice. The guideline also calls for thorough ventilation, distancing and disinfecting of common areas.

Japan, after much delay compared to many other countries, reopened its borders to individual foreign tourists in October and a resumption of international cruise ship operations will further help revive the country’s tourism that has been badly hit by the pandemic.

Prior to the pandemic, more than 2.15 million cruise ship passengers visited Japan in 2019, according to the Transport and Tourism Ministry.