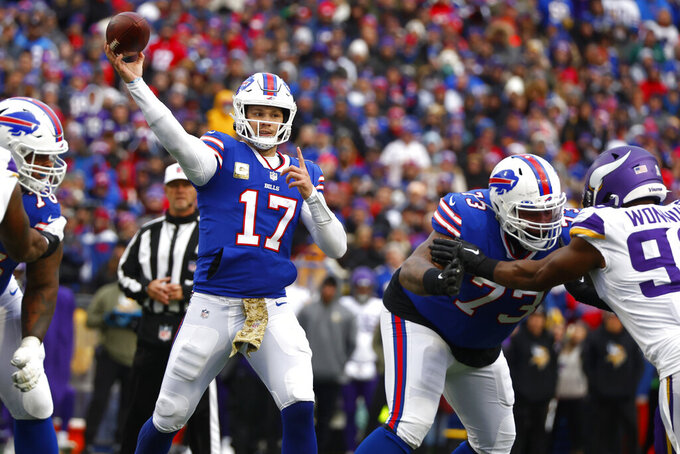 ORCHARD PARK, N.Y. (AP) — Josh Allen appreciates still having the unwavering trust of his teammates in leading the Bills offense, despite his recent rash of turnovers.

Following two straight losses and throwing six interceptions in his last three outings, Buffalo’s quarterback also understands the only way to maintain their faith, and reduce his troubling interception rate, is by placing more trust in his teammates.

Allen, on Wednesday, acknowledged there have been times he has pressed too much during an inefficient stretch in which he now leads the NFL with 10 interceptions.

“Now maybe there’s a play here or there that maybe I did cross the line,” he said.

In accepting what’s gone wrong, Allen said he can now work on what he called being an easy fix.

Hard-earned as the lesson might have been, it’s an issue not foreign to Allen. He has faced questions about his accuracy going back to his days at college in Wyoming, before the Bills selected him in the first round of the 2018 draft.

“It’s that constant, I can make a play or I can trust somebody else to make a play that I’ve battled with my entire football career, and trying to do too much sometimes,” he said. “It’ll hurt you.”

Bad as Allen might feel, center Mitch Morse hoped the quarterback doesn’t beat himself up too much or alter his aggressive playing style.

“He’s such an explosive player, so confident, we don’t want him to lose that or second-guess himself. I hope he doesn’t, because that’s what makes him so special,” Morse said.

“He’s his biggest critic and anything that needs to be changed, he’ll do,” he added. "We implicitly trust him.”

Allen and the Bills (6-3) face a midseason crossroad much of their own making in preparing to host the Cleveland Browns (3-6) on Sunday.

In two weeks, Buffalo has dropped from having the inside track to finishing first in the AFC to sitting third in the division.

After throwing two more in a 20-17 loss at the New York Jets, Allen committed three giveaways (two interceptions and a lost fumble in the end zone) in a 33-30 overtime loss to Minnesota in which the Bills blew a 17-point, third-quarter lead.

The quarterback’s struggles coincide with a sudden slide in offensive production.

Buffalo has gone three straight games without scoring a touchdown after halftime, and that has contributed to the team having a 4-3 record when tied or leading entering the third quarter.

The Bills' red-zone production has waned. Buffalo has turned the ball over inside an opponent's 20 in each of the last five games (three interceptions and two lost fumbles).

“I think part of it is just kind of fighting the human nature to relax a little bit,” first-year offensive coordinator Ken Dorsey said of the offense’s second-half outage. “It’s just getting back to our roots, getting back to what we know of execution, playing smart, not conservative football.”

Coach Sean McDermott noted the Bills could be better at running the ball.

Though Buffalo has topped 100 yards rushing in all nine games and ranks third in the NFL in averaging nearly 130 yards per outing, much of that has to do with Allen’s scrambling ability. The quarterback leads the team with 476 yards rushing and accounts for four of Buffalo’s eight TDs rushing.

“It’s a balance. He makes plays, he makes spectacular plays,” McDermott said. “I believe in him and we just got to do a better job of taking care of the football and taking what the defense gives us at times.”

NOTES: The Bills were unable to hold a full practice with 13 players listed on their injury report. They included LB Matt Milano, DT Jordan Phillips, DT Tim Settle and CB Cam Lewis, who all came down with an undisclosed illness. ... Allen was limited in practice to continue resting a right throwing elbow he injured against the Jets.