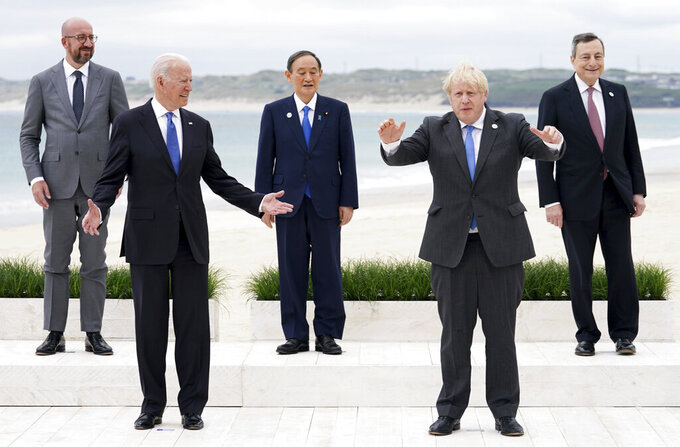 Phil Noble, ASSOCIATED PRESS
FILE - In this Friday, June 11, 2021 file photo, leaders of the G7 pose during a group photo at the G7 meeting at the Carbis Bay Hotel in Carbis Bay, St. Ives, Cornwall, England. When U.S. President Joe Biden took office early this year, Western allies were falling over themselves to welcome and praise him and hail a new era in trans-Atlantic cooperation. The collapse of Kabul certainly put a stop to that. Even some of his biggest fans are now churning out criticism. (Phil Noble, Pool Photo via AP, File)

WASHINGTON (AP) — The United States clashed with some of its closest allies over President Joe Biden’s insistence on sticking to an Aug. 31 Afghanistan withdrawal date that will shut down a frantic international evacuation effort from Taliban rule.

Biden insisted after virtual talks with leaders of the Group of Seven industrialized democracies Tuesday that the U.S. and its closest allies would “stand shoulder to shoulder” in future action over Afghanistan and the Taliban, despite disappointing them in their urgent pleas now to allow time for more airlifts.

The U.S. president was adamant that the risk of terror attacks was too great to accede to appeals from G-7 leaders to keep what are now 5,800 American troops at Kabul's airport beyond the end of the month, anchoring the airlifts.

Britain and other allies, many of whose troops followed American forces into Afghanistan nearly 20 years ago to deal with the plotters of the Sept. 11 attacks on the United States, had urged Biden to keep American forces at the Kabul airport longer. No country would be able to evacuate all their citizens and at-risk Afghan allies by the Aug. 31 deadline, allied officials had said.

"We will go on right up until the last moment that we can,” said British Prime Minister Boris Johnson, who had openly lobbied to keep the airport presence after Aug. 31. Johnson acknowledged he was unable to sway Biden to extend the U.S. military presence in Tuesday's talks.

A senior French official, speaking anonymously in accordance with the French presidency’s customary practices, said President Emmanuel Macron had pushed for extending the Aug. 31 deadline but would “adapt” to the American sovereign decision. “That’s in the hands of the Americans,” he said.

In a partial show of unity, G7 leaders agreed on conditions for recognizing and dealing with a future Taliban-led Afghan government, but there was palpable disappointment Biden could not be persuaded to extend the U.S. operation at the Kabul airport to ensure that tens of thousands of Americans, Europeans, other third-country nationals and all at-risk Afghans can be evacuated.

The meeting of the leaders of Britain, Canada, France, Germany, Italy, Japan and the U.S. served not only as a bookend to the West’s 20-year involvement in Afghanistan that began as a response to the Sept. 11, 2001 terrorist attacks but also a resigned acknowledgment from European powers that the U.S. calls the shots.

“Our immediate priority is to ensure the safe evacuation of our citizens and those Afghans who have partnered with us and assisted our efforts over the past twenty years, and to ensure continuing safe passage out of Afghanistan,” the leaders said in a joint statement that did not address precisely how they would guarantee continuing safe passage without any military presence.

Going forward, the leaders said they would “judge the Afghan parties by their actions, not words,” echoing previous warnings to the Taliban not to revert to the strict Islamic form of government that they ran when they last held power from 1996 until the U.S.-led invasion that ousted them in 2001.

“In particular, we reaffirm that the Taliban will be held accountable for their actions on preventing terrorism, on human rights in particular those of women, girls and minorities and on pursuing an inclusive political settlement in Afghanistan,” the leaders said. “The legitimacy of any future government depends on the approach it now takes to uphold its international obligations and commitments to ensure a stable Afghanistan.”

Yet, individual leaders offered less sanguine descriptions of the meeting as well as the state of affairs in Afghanistan, which have dramatically changed since the bloc last met in Britain in June. At the time of that summit, Afghanistan had been almost an afterthought with the leaders more concentrated on the coronavirus pandemic, China and Russia. Although Biden had announced his plan for complete withdrawal from Afghanistan, the Cornwall meeting did not anticipate Taliban’s rapid takeover.

On Monday, CIA chief William Burns met with Taliban leader Mullah Abdul Ghani Baradar in Kabul in talks in which the Taliban underscored they would not accept a U.S. military presence at the airport beyond Aug. 31.

Taliban spokesman Zabihullah Mujahid on Tuesday said his group would accept “no extensions” to the deadline.