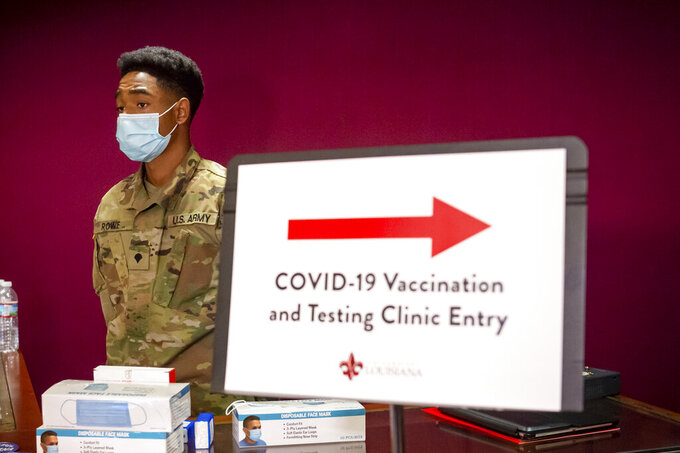 Scott Clause, ASSOCIATED PRESS
FILE - A sign for the COVID-19 vaccination and testing clinic entry is displayed as Louisiana Gov. John Bel Edwards tours the University of Louisiana campus vaccination site as part of the university's Shot for $100 campaign, on Aug. 19, 2021, in Lafayette, La. Edwards’ administration has spent $27 million and counting on incentive programs, community door-knocking and advertising to try to persuade people to get the coronavirus vaccine. (Scott Clause/The Daily Advertiser via AP, File)

NEW ORLEANS (AP) — The new coronavirus omicron variant has not been found in Louisiana, but that doesn’t mean it hasn’t arrived — and people should get ready, Louisiana’s governor and chief health officer said Friday.

Dr. Joseph Kanter compared the situation to preparing for a tropical storm that is still far from land.

Edwards said the state has the capacity, “at least at current numbers, to genetically sequence all of the positive PCR tests" to check for variants such as omicron and delta, which surged in Louisiana during August and September.

The state reported 479 new COVID-19 cases Friday for a total of nearly 772,800 since the coronavirus pandemic began. Patients include 213 in hospitals, 24 of them on ventilators. Twelve deaths brought that total to 14,826.

“Today in Louisiana, as best we know, virtually 100% of the cases are attributed to the delta variant,” mainly among people less than fully vaccinated, Edwards said.

He, Kanter and Miranda Mitchell, an internal medicine specialist in the LSU Health System, repeatedly urged people to get vaccinated during the briefing held in Baton Rouge and shown live on Louisiana Public Broadcasting.

Vaccination is the best protection but less than half of all eligible state residents have that protection, Edwards and Kanter said.

“Right now around 49% of Louisiana's population is fully vaccinated. Clearly that’s not enough,” the governor said.

Kanter noted that about 2,000 people a day are getting vaccinated, compared to as many as 10,000 a day during the delta variant surge in August and September. Many who got vaccinated during the summer spike were frightened because they knew people hospitalized with COVID-19, he said.

“How do we communicate that risk, that lesson, without people having to live through it themselves?” he asked.