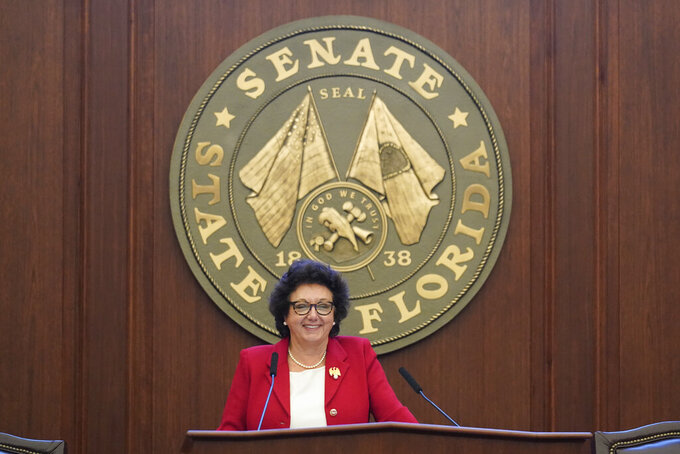 Wilfredo Lee, ASSOCIATED PRESS
FILE - Sen. Kathleen Passidomo, who was chosen to be the next president of the state Senate during the 2023 and 2024 terms, smiles as she stands on the dais during a legislative session at the Florida State Capitol, Monday, March 7, 2022 in Tallahassee, Fla. The results in the legislative races were part of a remarkable midterms performance for DeSantis and other Republicans, with statewide candidates flipping many longtime Democratic counties from blue to red, including the state's largest, Miami-Dade. "Tonight is a monumental win in the fight to keep Florida Free!" incoming Senate President Kathleen Passidomo said in a statement. (AP Photo/Wilfredo Lee, File)

TALLAHASSEE, Fla. (AP) — The Florida Legislature crowned the new Republican leaders of the House and Senate on Tuesday, as the GOP supermajority in the statehouse appears poised to deliver on the conservative agenda of Gov. Ron DeSantis.

Republicans have been in firm control of state government for years but this month the party won more than a two-thirds majority in each chamber, giving the GOP wide range to pursue conservative policies as momentum builds behind DeSantis as a potential 2024 Republican presidential candidate.

“Along with our great governor, we will deliver on a bold agenda, securing a future for Florida that is full of prosperity, abundant with opportunity, and rich in quality of life,” Renner told House lawmakers in a speech.

Renner and Passidomo did not give detailed policy breakdowns during the ceremonial meeting of the Legislature, though controversial bills on education and abortion are likely to be filed next year. Both lawmakers made references to a new law limiting instruction on sexual orientation and gender identity in kindergarten through the third grade, hinting that additional legislation could follow.

“Some folks are trying to distance parents from important decisions in their child’s life. Whether it is education, health or sports, keeping the parents in the dark is unacceptable,” Passidomo said. “Moving forward, we are going to make sure that any decision that involves a minor allows the parents at the table.”

Renner was more pointed, saying “our historical moment is one in which ideologues seek to politicize everything, who treat their ideology as a religion and demand we follow it, no matter the costs.”

“They have pushed indoctrination at the expense of education. They spend more time defending drag queen story time than actually promoting phonics and the science of reading,” he said.

DeSantis has been able accomplish his legislative agenda with the help of lawmakers in the GOP-controlled statehouse.

Together they have pushed back against COVID-19 mask and vaccine mandates, limited how racial issues can be taught in schools and dissolved a private government controlled by Disney in Florida after the company publicly opposed the law limiting lessons about sexual orientation and gender identity in kindergarten through third grade.

The Legislature's next regular session is scheduled to being in March.