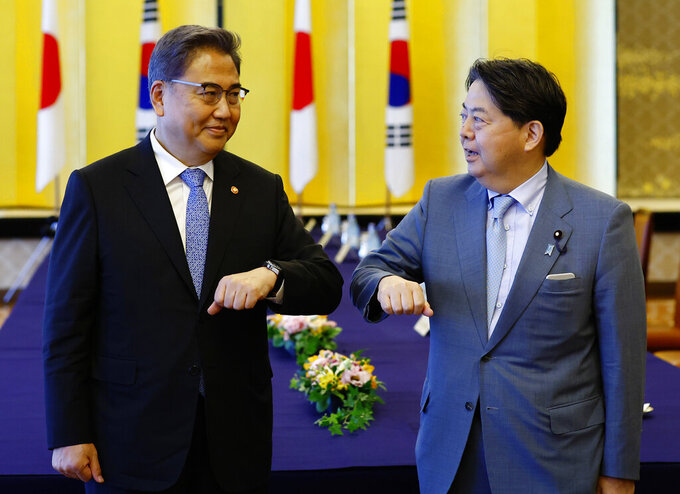 TOKYO (AP) — Japan's foreign minister said Tuesday he expects South Korea to take appropriate steps toward resolving the countries' wartime disputes, warning that a mishandling especially of the issue of forced Korean laborers would cause “grave” consequences for their bilateral ties.

Yoshimasa Hayashi hosted his South Korean counterpart Park Jin on Monday and both reaffirmed the importance of resolving the disputes and improving their ties and the three-way relations with the United States amid growing tensions with China and North Korea and the war in Ukraine.

Relations between Tokyo and Seoul have been at their worst in years, causing concern about security cooperation in East Asia. U.S. President Joe Biden has called for improved ties between its two Asian allies.

At the center of the dispute is the abusive treatment of wartime Korean laborers by Japanese mines and factories. The two sides are also at loggerheads over Japanese interpretation of so-called “comfort women,” who were forced to serve at Japanese military brothels before and during World War II.

In 2018, South Korean courts ordered two Japanese companies, Nippon Steel and Mitsubishi Heavy Industries, to compensate former Korean laborers. The Japanese companies and its government have refused to comply with the rulings, while the former laborers and their supporters are pursuing forced sale of corporate assets of the two firms held in South Korea.

Japan maintains that all compensation issues have been resolved under the 1965 treaty normalizing the countries' relations, and has criticized South Korea for breaching it.

Hayashi on Tuesday quoted Park as saying that his country would seek a resolution of the dispute before the sale of the two Japanese companies' assets in South Korea. The countries' foreign ministries also acknowledged the same remarks in their releases Monday night.

Hayashi said Japan will “watch closely" how President Yoon Suk Yeol's government responds to the issue while communicating closely with the South Korean side in order to put their ties back to “a healthy state.”

He also warned that the sale of the companies' assets "will invoke a grave situation for the Japan-South Korea relations.”

On Tuesday, Park met with Prime Minister Fumio Kishida for about 20 minutes and conveyed Yoon's condolences following former leader Shinzo Abe's assassination. Kishida thanked for the president's message and sought Park’s effort toward resolving the problems between the two sides, according to the prime minister's office. Japanese officials declined to give further details on the talks.

South Korea's Foreign Ministry said in a statement that Park also conveyed to Kishida Yoon's message of his resolve to improve ties and that Kishida expressed his gratitude. The ministry cited Park as telling Kishida that he hopes the two leaders would meet at a mutually convenient time.

Park also told Kishida that his government will respect a 2015 agreement in which Japan contributed 1 billion yen ($7 million) in funds as a measure of atonement for the wartime sexual exploitation, Kyodo said. The previous South Korean government of President Moon Jae-in had rejected the agreement.

This story corrects the amount funds to 1 billion yen ($700 million).