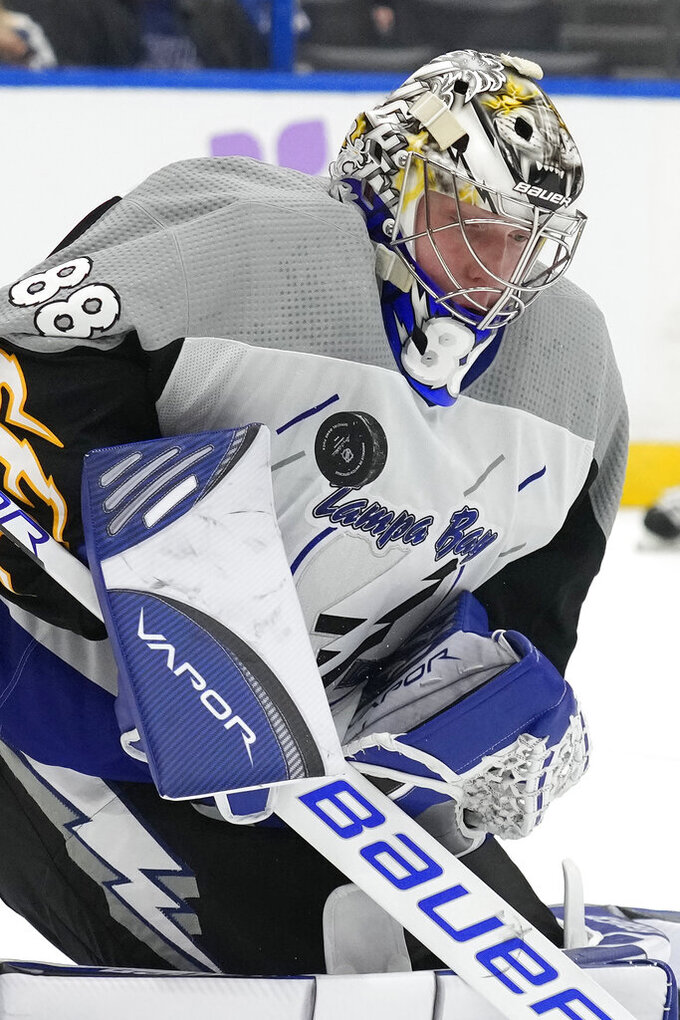 Steven Stamkos had a goal and an assist, and Philippe Myers also scored for the Lightning. Mikhail Sergachev picked up two assists and has five assists and seven points during a three-game point streak.

Kucherov had a power-play goal in the second period and an empty-netter.

This is the first time Tampa Bay has allowed fewer than two goals this season. The Lightning have given up three or more in 13 of 17 games.

“I'll take the chances we had over the one's they had,” Tampa Bay coach Jon Cooper said. “They're getting pucks to the net, but if your goalie sees them and from the outside, it's just limiting what happens after that. I thought we did a good job of that tonight.”

Elias Lindholm scored for Calgary and Jacob Markstrom stopped 20 shots. The Flames had won two in a row after losing seven straight (0-5-2).

Stamkos’ goal was his 490th, tying him with Norm Ullman for 49th on the all-time list. The Lightning captain picked up his 500th career assist Tuesday night against Dallas.

Stamkos has a goal in two consecutive games after going 10 games without one. He opened the season with seven goals during a five-game goal streak.

Lindholm had a power-play goal at 4:53 of the third before Myers gave Tampa Bay a 3-1 lead 10 seconds later, when his unobstructed shot from the blue line eluded Markstrom.

Less than a minute after Calgary’s Milan Lucic had a goal disallowed after a video review determined the Flames were offside, Stamkos made it 1-0 from the left circle at 8:03 of the first.

Kucherov put Tampa Bay up 2-0 from the right circle during a power play with 1:44 left in the second. Sergachev made a nifty play at the point to keep the puck in the offensive zone, sent a backhand pass to Stamkos, who set up Kucherov with a pass through the slot.

Vasilevskiy turned aside 16 shots during the second.

Calgary’s Adam Ruzicka was left alone in the low left circle, but his shot hit the post midway through the second.

This was the first of a six-game Eastern Conference trip for the Flames.

“This is going to be a big trip for us, for sure." Calgary center Mikael Backlund said. “When the trip's over, we're at a point of the season where you can tell where team's are at.”

Lucic entered on a 37-game goal drought. … Stamkos has four game-opening goals this season and 79 overall. Vincent Lecavalier, with 80, holds the Tampa Bay record. … Tampa Bay RW Corey Perry, who is 99th on the NHL career goals list with 407, has gone 11 consecutive games without one.

Lightning: D Nick Perbix left in the second with an undisclosed injury. ... D Erik Cernak, who was hit in the ankle area by a shot from Washington’s Alex Ovechkin on Nov. 11, was on the ice before the morning skate. … D Cal Foote (lower body) took part in the morning skate in a no-contact jersey. … D Zach Bogosian (offseason shoulder surgery) is expected back within the next week.

Flames: Continue the eastern swing at Florida on Saturday night.