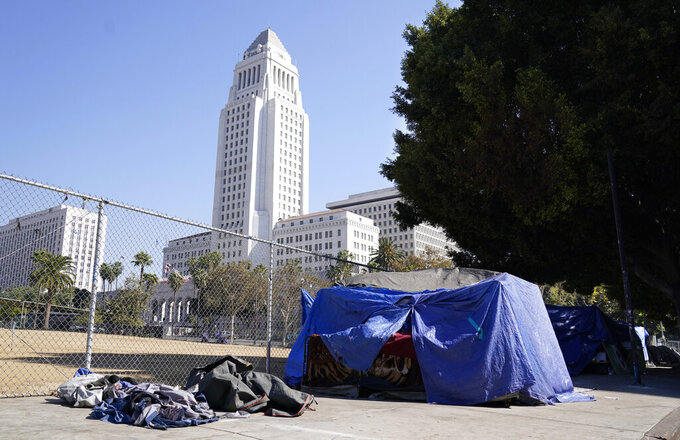 LOS ANGELES (AP) — Faced with an out-of-control homeless crisis, Los Angeles Mayor Eric Garcetti on Monday proposed spending nearly $1 billion in the coming year to get people off the streets, build housing and clean up squalid encampments that have spread into nearly every neighborhood in the city.

The blueprint for record-level spending comes as City Hall faces widening criticism for its inability to restrain the growth of homelessness, even though the city continues to spend an ever-larger share of its budget on programs aimed at unhoused people.

In a sprawling online speech that touched on issues from climate change to WiFi access, Garcetti also proposed a pilot program to give public money to struggling households, known as guaranteed basic income. He said $24 million in taxpayer dollars would be used to provide $1,000 a month to 2,000 households for a year, “No questions asked.”

The city would also fund a one-year pilot project to dispatch a mental health professional — rather than a police officer— to non-violent crises among homeless people, focusing on hard hit areas like Hollywood.

When Garcetti took office in 2013, the city was spending about $10 million treating homelessness. In his annual speech to City Council, he said he would propose spending $955 million for the year that begins July 1, funded partly by federal dollars.

Like many big cities, Los Angeles has struggled for decades to manage a homeless population. But while it was once largely confined to the notorious Skid Row neighborhood in downtown, rows of tents, cardboard shelters, battered RVs and makeshift plywood structures are now familiar sights throughout the nation's second most populous city.

The drive down famous Sunset Boulevard is dotted with encampments small and large, often surrounded by heaps of trash, castoff furniture and discarded clothing.

The funding will include nearly $100 million from the federal COVID rescue package, and the city hopes county, state and federal governments will continue to expand their financial assistance.

It's only a guess if the surge in taxpayer dollars will bring visible change.

Garcetti has said the homeless problem will remain without major national policy shifts, including a revamped mental health care system and a so-called right to housing, which would make access to housing an entitlement, similar to the way the federal government provides Medicaid and food stamps for the needy.

In his speech, he called on the federal government to declare a national right to housing and fund vouchers that he said could help “make homelessness a thing of the past.”

Mike Arnold, president and CEO of the Midnight Mission, which provides beds, meals and drug rehabilitation services on Skid Row, called the proposal “great news” but worried the dollars would taper off after one year.

He said he hoped the cash infusion would help speed up the sluggish rollout of a 2016 bond measure approved by voters to create 10,000 housing units over a decade.

Arnold also fears that the city’s money will be misspent.

First, he said, the city needs enough shelter beds for the newly homeless. Then it needs interim housing for people with longer-term needs, like addiction counseling or mental health treatment.

“And we also need affordable housing for low-income people who are mostly self-sustaining, who need just a leg up. That is how a system is supposed to work,” Arnold said.

The $955 million proposal will be included Tuesday in the mayor's annual budget blueprint, which must be approved by City Council.

John Maceri, CEO of The People Concern, one of L.A.’s largest housing and social services agencies serving the homeless, welcomed the new funds but added, “We have a long way to go.”

Along with additional money, he said the city needs to cut red tape to increase financing and housing construction on a broad scale, while funding services for the homeless, many of whom suffer from drug and mental health issues.

The speech comes at a time when the city has been struggling to emerge from the COVID crisis and recover from pandemic job losses, slow the spread of homelessness, deal with increasing crime rates and contend with racial tensions.

In his wide-ranging proposals, Garcetti also said he would seek to:

— Establish an advisory commission that could lead to creation of a pilot slavery reparations program for Black residents.

— Declare a moratorium on new oil and gas drilling anywhere in the city.