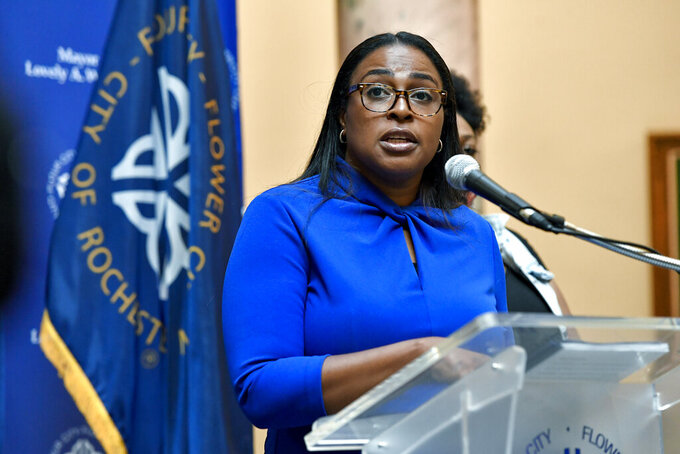 ROCHESTER, N.Y. (AP) — Rochester Mayor Lovely Warren said she had “no regrets” as she prepared Wednesday to leave office a month early after pleading guilty to a misdemeanor campaign finance charge.

The embattled Democrat agreed in October to cut short her second term as part of a deal with prosecutors just as she was scheduled to go on trial. She and two assistants were accused by prosecutors of taking steps to evade contribution limits during her 2017 reelection campaign.

She planned to resign at 11:59 p.m. Wednesday. Deputy Mayor James Smith was set to finish out the remaining month of her term. Warren was defeated in a primary this year by Malik Evans, who went on to the win the general election and will become mayor of New York's third-largest city in January.

“I am grateful that I can move on to this new chapter with no regrets, no unkept promises,” she said in a videotaped address.

Even before the charges, Warren had been facing heavy criticism for the city’s handling of the suffocation death of Daniel Prude, a Black man who died in March 2020 a week after being held by police officers against the pavement until he stopped breathing.

His death sparked outrage in September 2020 after his relatives released police body camera video of the incident.

Warren was indicted by a grand jury on two campaign finance charges in October 2020.

Warren did not directly address the controversies in her goodbye speech, instead focusing on the economic, educational and social accomplishments during her almost eight years in office.

“We have set the stage for continued success,” she said.

Under the deal, Warren and her two co-defendants each pleaded guilty to a misdemeanor charge of accepting campaign contributions that exceeded legal limits. Warren’s deal also resolved separate charges related to unsecured firearms in her home.