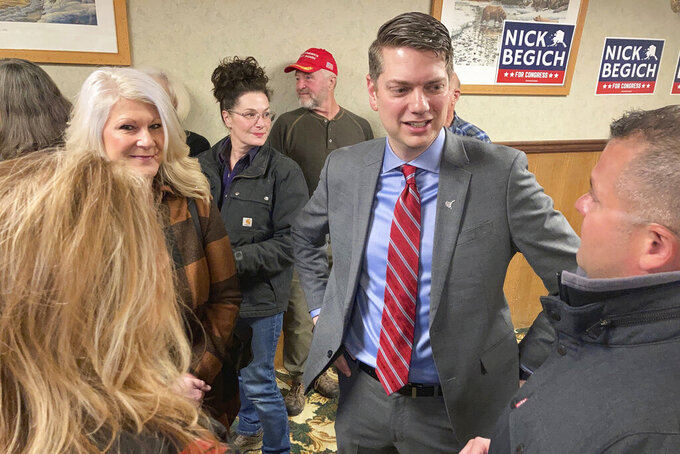 Mark Thiessen, ASSOCIATED PRESS
Nicholas Begich III, second from right, speaks with supporters ahead of announcing his plans to run for Alaska's lone U.S. House seat on Thursday, Oct. 28, 2021, in Wasilla, Alaska. Begich, a Republican, plans to run for the seat that has been held since 1973 by Republican Rep. Don Young. (AP Photo/Mark Thiessen)

WASILLA, Alaska (AP) — Nicholas Begich III on Thursday kicked off his campaign for Alaska’s lone seat in the U.S. House against the longest-serving Republican in that chamber, saying Alaska needs new energy.

Begich, 44, addressed a group of supporters in a small room off a busy café in Wasilla, about 45 miles (72 kilometers) north of Anchorage. He said there needs to be generational change as he challenges fellow Republican Don Young, 88, for the seat that Young has occupied for most of the time that Alaska has been a state.

“This race is not about Don Young,” Begich told The Associated Press in an interview after the announcement.

Young has been in office since 1973, winning a special election after Begich’s grandfather, then-U.S. Rep. Nick Begich, was declared dead after his plane went missing.

Both Begich and Young’s campaign addressed a rumor that suggested Young would step aside and give Begich his blessing for the office.

“There is absolutely no truth to the rumor. As he always has, Congressman Young is running hard, and running to win. He looks forward to a spirited campaign season,” Young’s campaign said in an email statement to the AP.

“Right now. Don Young is in the race, and I fully expect that he’ll remain in the race right now, and we’re both going to run vigorous campaigns,” Begich said.

Though both are Republicans, Begich said there are differences between the two.

“I consider myself a strong conservative,” he said, noting that was one of the reasons he chose to make his campaign announcement in Wasilla instead of Anchorage. “Wasilla is a conservative core.”

He at one point faulted Young for siding with Democrats on some votes but also invoked the mantra of the late U.S. Sen. Ted Stevens that called for doing what was best for Alaska despite the politics.

Begich said his loyalties lie with the values and principles of the Republican party. Former President Donald Trump, the head of the GOP, has continued to try to cast doubt on the results of the 2020 election he lost to President Joe Biden. Begich did not answer when asked if he shared Trump’s view.

“The election was adjudicated through a constitutional process, and we have the result that we have," Begich said.

Begich also condemned the attack on the U.S. Capitol by Trump supporters.

“What we saw on Jan. 6 was absolutely inappropriate. I think the entire country has to agree with that, and it was an unfortunate stain on the history of our nation and I hope that it is not repeated,” he said.

Begich comes from a long line of prominent Alaska Democrats, including his grandfather and two uncles, one a current state senator and the other a former U.S. senator.

During his announcement, he addressed that, saying he comes from a large family and they approach service differently.

Begich has always been a Republican, state voting records show, and he will become the highest profile person to challenge Young within the GOP since then-Gov. Sarah Palin’s lieutenant governor, Sean Parnell, took Young to the wire in the 2008 Republican primary, losing by 304 votes.

Young is the fourth person to hold the seat since Alaska gained statehood and now has the ceremonial title of Dean of the House, carried by the most senior member of the body. The title comes with no official duties other than swearing in the House speaker every two years and ensuring civility in the House.

He was the Republican candidate in the 1972 general election against then-U.S. Rep. Nick Begich. Three weeks before the election, Begich’s plane disappeared on a flight from Anchorage to Juneau along with then-House Majority Leader Hale Boggs, the father of the late journalist Cokie Roberts. Alaskans reelected the Democrat anyway.

Begich was declared dead in December 1972 and Young won a close special election in March 1973.

He has dispatched 21 opponents — some tried twice — since then.

Others who have already filed paperwork already to appear on the ballot or who have filed statements of candidacy with the Federal Election Commission are Randy Purham, Gregg Brelsford and Shannon Scott Evans, all Republicans, and Chris Bye, a Libertarian. No Democrats have filed yet.

A voter initiative passed last year calls for a single primary ballot, with the top four vote-getters regardless of party advancing to the general election. Ranked-choice voting would be used for general elections.