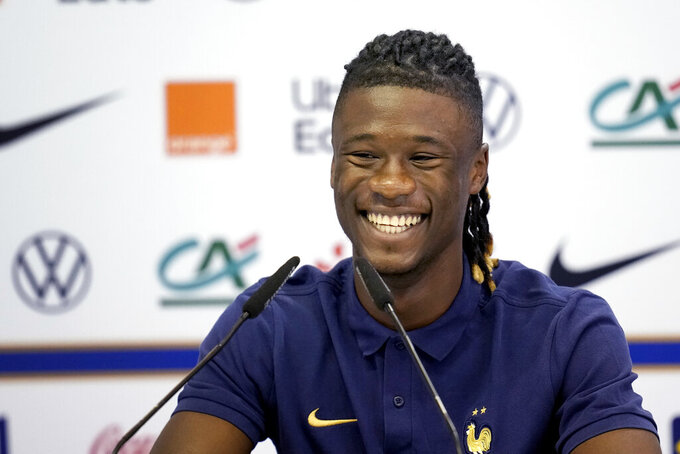 Christophe Ena, ASSOCIATED PRESS
France's Eduardo Camavinga smiles during a press conference at the Jassim Bin Hamad stadium in Doha, Qatar, Saturday, Nov. 19, 2022, ahead of the upcoming World Cup. France will play their first match in the World Cup against Australia on Nov. 22. (AP Photo/Christophe Ena)

DOHA, Qatar (AP) — France's World Cup squad has been decimated by injuries to star players like Karim Benzema, Paul Pogba and N'Golo Kante. While the absences are a big blow for the defending champion, they open the door for a new generation of players to shine in Qatar.

Players like midfielders Eduardo Camavinga and central defender Ibrahima Konate, who have six international appearances between them, now have more of a chance of starting France's opening match against Australia in Group D on Tuesday.

“If the coach selects us we'll want to show what we can do and bring a breath of fresh air. It’s a childhood dream and I’m really looking forward to the Australia game," said the 20-year-old Camavinga, who made the first of his four appearances two years ago. “Of course I don’t want to be a super-sub my whole life, I want to show what I can do. I know my time will come.”

Camavinga won the Spanish league title and the Champions League last season with Real Madrid alongside Benzema, the Ballon d'Or winner who was ruled out of the tournament after tearing a left thigh muscle in training on Saturday.

“It wasn't a great night for us when we found out Karim was out,” Camavinga said. “He couldn’t speak to us personally because he had already left (for Madrid early on Sunday morning). He contacted me by text message, and he was a bit down.”

Konate made his international debut in June and has played twice for France.

“It was quite hard for us to take,” the 23-year-old Liverpool defender said. “I’m really sad for those who are injured, I think they could have done very well for us."

But Konate echoed Camavinga’s sentiment that it also opens up new opportunities for reserve players.

“I’m part of the younger generation, we’re lucky that we can show what we can do. This is what happens in football, so we have to look forward rather than back,” he said. “I’ve achieved my goal to be here. We all need to be leaders on and off the field.”

That's what Benzema had become and France has lost another of its stars.

Benzema didn't play when France won the World Cup four years ago, but Pogba and Kante were the engines in midfield and their absence deprives France of two hugely experienced players.

Camavinga says that has not dampened spirits.

“I wouldn't say so, there are other leaders in the team. I wouldn't say we're going to lower our ambitions," he said. “We'll keep fighting."

Camavinga was involved in a training-ground tackle that injured Christopher Nkunku on Tuesday evening. Nkunku hurt his left knee and had to pull out of the World Cup squad.

The long injury list — coupled with France's loss of its Nations League title — has increased speculation that Les Bleus could be a weakening force.

“If other teams think we’re less of a proposition, then that’s their problem,” Camavinga said. "I don’t really pay attention to what other people say about us.”

No team has successfully defended its World Cup title since Brazil in 1962.

France coach Didier Deschamps is also sweating on the fitness of central defender Raphael Varane — who has not played since sustaining a hamstring injury with Manchester United on Oct. 11.

Varane was crucial to France's success when it won the World Cup in Russia four years ago, and has played all of his 87 international games under Deschamps. Presnel Kimpembe, who is Varane's usual partner in central defense, is also out injured.

If Varane is not ready to face Australia, then Konate could get a start alongside either William Saliba, who plays for Premier League leader Arsenal, or Bayern Munich's Dayot Upamecano — Konate's former teammate when they played for Leipzig.

“There’s a lot of competition in this position," Konate said.