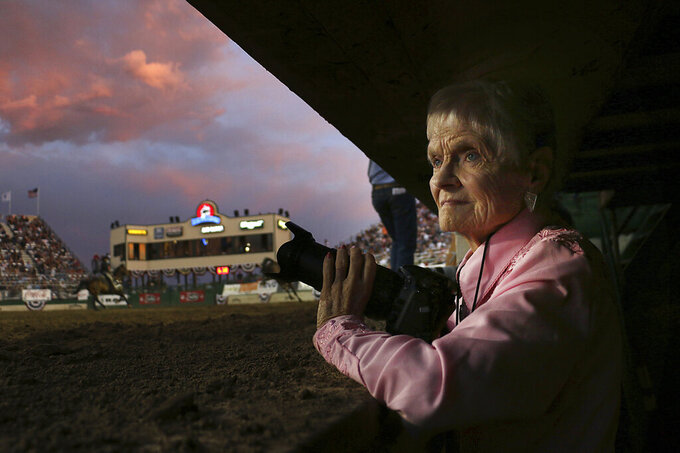 Jason Bean, ASSOCIATED PRESS
Longtime Reno photojournalist Marilyn Newton looks to make a photograph during sunset at the Reno Rodeo on June 22, 2022 in Reno, Nev. Newton, has covered the Reno Rodeo since 1963, was inducted this week into the Nevada Women's Fund's Hall of Fame. (Jason Bean/The Reno Gazette-Journal via AP)

RENO, Nev. (AP) — The newest inductee to the Nevada Women's Fund Hall of Fame is Marilyn Newton, a longtime newspaper photographer who helped blaze the trail for other female journalists in the state a half-century ago.

Newton, 77, spent 52 years at the Reno Gazette Journal and still makes photos for the Reno Rodeo, Reno Air Races and Reno Balloon Races, as well as at old mining ghost towns she's published a book about.

The Nevada Newspaper Association said Newton was believed to be the first woman hired as a full-time newspaper photographer in Nevada when it inducted her into its hall of fame in 2015.

“It was a man’s world when I started, but I had a lot of people that supported me and turned me loose and let me go,” she told the Gazette Journal last week.

Newton, who formally was inducted into the fund's hall of fame Thursday night, said she applauds women of all industries who have blazed trails for others and hopes that there are many more to come.

Her advice to other women?

The fund established in 1982 supports women and families through recognition and education scholarships to hep increase their chances for a self-sufficient future.

“Her legacy will endure for decades through the other ambitious women she has influenced,” said Ila Achtabowski, President and CEO of Nevada Women’s Fund.

As a child, Newton remembers her mother running the circulation department of the Nevada Appeal in Carson City, which is how Newton and her twin sister became papergirls.

When she was 12, Newton published her first story: a two-paragraph sports brief. The following year, she used her first camera, a Kodak Brownie, to snap what would become her first published photo.

Her first job in a newsroom was as a "Girl Friday'' — fetching coffee and running errands — at the Reno Evening Gazette in 1963, she said.

Within a week, she wrote her first front-page story and within six months was carrying a camera. She switched to the Nevada State Journal and photojournalism full-time in 1967.

At the time, the most prominent role women had there was writing for the “Society” section. But she soon started responding to spot news with her camera, and her photographs impressed the editors.

“I didn’t let anything stand in my way,” she said.

Over the past half-century, Newton captured many of northern Nevada’s most historic moments — from floods to notorious crime scenes. She photographed every president from Lyndon B. Johnson to Barack Obama, and countless celebrities in between, including John Wayne on a movie set.

But of all the photos she took during her newspaper career, she said her favorite is still a 1977 image of police drawing their guns on murderer Jay Garrett after a high-speed chase.

By then, she'd developed a relationship with local officers that made it possible to be close enough to capture the moment before they shot and arrested Garrett, who was sentenced to life in prison.

“Treat everybody with respect,” Newton said. “You’ll get a lot farther that way.”