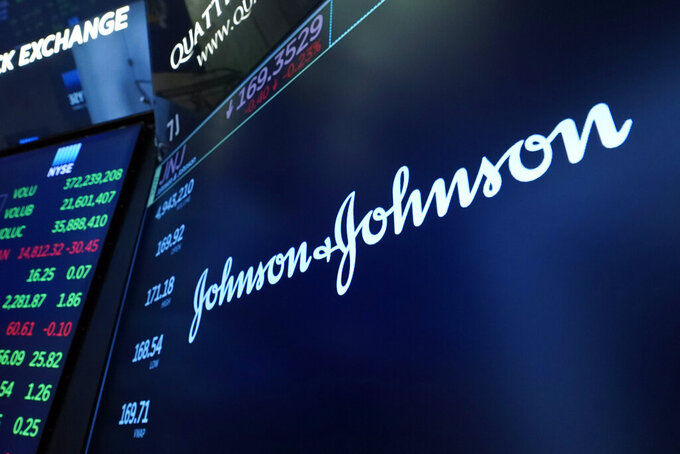 Richard Drew, ASSOCIATED PRESS
FILE - The Johnson & Johnson logo appears above a trading post on the floor of the New York Stock Exchange, Monday, July 12, 2021. Johnson & Johnson is raising its 2021 profit forecast again after growing sales of the cancer treatment Darzalex and other drugs pushed it past Wall Street’s third-quarter earnings expectations. The health care giant also said Tuesday, Oct. 19, 2021 that sales of its single-shot COVID-19 vaccine started to pick up in the quarter. (AP Photo/Richard Drew, file)

The world’s biggest maker of health care products hiked its 2021 earnings forecast after saying Tuesday that net income climbed 3% to $3.67 billion in the recently completed quarter.

Sales of the company's single-shot COVID-19 vaccine started to pick up in the quarter and nearly doubled what it brought in during the first half of 2021.

J&J also said that sales of over-the-counter drugs, which do not need prescriptions, grew 18% globally as more customers bought Tylenol and Motrin partly because they wanted vaccine symptom relief.

Injections of COVID-19 vaccines, which have been widely available since spring, can come with side effects like arm soreness or a temporary fever.

J&J rang up $502 million in sales from its COVID-19 vaccine in the third quarter after pulling in $264 million during the first half of 2021.

The New Brunswick, New Jersey, company’s vaccine started slow earlier this year. Its rollout was hurt by manufacturing complications and concern about rare side effects, including a blood clot disorder.

But company leaders expect sales to pick up and total around $2.5 billion for the year. The company has said it doesn't intend to profit from the shots.

Last Friday, Food and Drug Administration advisers endorsed booster shots of the vaccine like they did for other shots from rivals Pfizer and Moderna. The FDA still has to decide whether to authorize the extra shots. Then the Centers for Disease Control and Prevention will weigh in on who should get them.

Outside vaccines, sales of J&J's multiple myeloma treatment Darzalex jumped 44% in the quarter to $1.58 billion. That helped revenue from the company’s largest business, pharmaceuticals, grow about 14% to nearly $13 billion.

Sales from J&J’s medical device segment grew 8% to $6.64 billion, even though a surge in COVID-19 cases prompted doctors and hospitals to postpone some non-emergency procedures like knee surgeries during the quarter.

Analysts expected, on average, earnings of $2.35 per share on $23.64 billion in revenue, according to FactSet.

J&J now forecasts 2021 adjusted earnings to range between $9.77 and $9.82 per share. The company also tightened its expectation for operational sales, which exclude the impact of currency exchange rates, to $92.8 billion to $93.3 billion.

Shares of J&J climbed more than 2% to $164.25 in late-morning trading. The Dow Jones Industrial Average, of which J&J is a component, rose slightly.