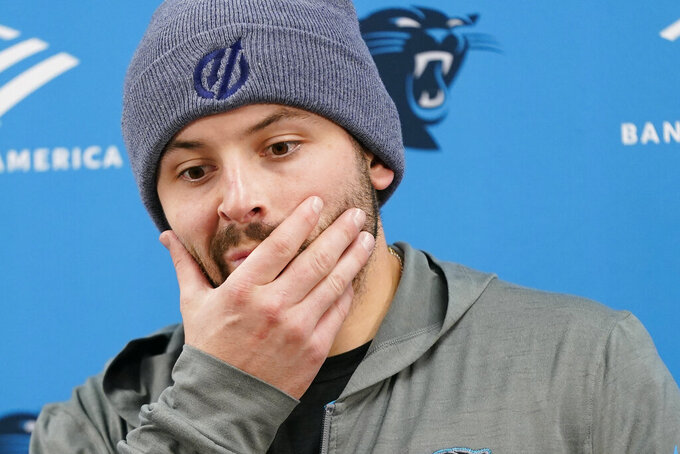 Wilks said he’ll wait until Wednesday to determine who will start Sunday against the Denver Broncos, with Baker Mayfield, Sam Darnold and P.J. Walker all in consideration.

“I want to be able to dive into a little more evaluation on Denver’s defense and determine who gives us the best opportunity to win that football game,” Wilks said Monday.

Mayfield, the top overall pick in the 2018 NFL draft, is coming off yet another poor performance Sunday against the Baltimore Ravens, completing 21 of 33 passes for 196 yards with two interceptions while failing to lead the Panthers to a touchdown.

“It sucks, to be honest with you,” Mayfield said. “We prepared. I felt like the game plan, everything was ready. We just didn’t execute. It’s tough, I’ll be honest with you. I put my heart and soul into this.”

Wilks previously said he wants to see Darnold play some in a game before starting him, so he could be waiting until Wednesday mostly for clarity on Walker's status. Walker missed Sunday's game with an ankle injury. Wilks said Walker is “working his way back."

"He could be in play based on what I get from the training staff on Wednesday," Wilks said.

Run defense. The Panthers run defense has come a long way since it allowed the Cincinnati Bengals to rush for 241 yards and five touchdowns three weeks ago. Carolina limited Baltimore to 115 yards on the ground, snapping the Ravens' streak of eight straight games with at least 150 yards rushing.

“I love the way the defense played,” Wilks said. “It gave us an opportunity and a chance."

Third down offense. The Panthers remain 32nd in the league on third down conversions, converting a paltry 28%. For perspective, the Kansas City Chiefs are converting an NFL-high 51.7% of their third downs.

Carolina's struggles in that area continued Sunday. It was 3 of 12 on third downs against the Ravens.

The ground game stalled Sunday, too. After averaging 159.5 yards per game on the ground since the departure of Christian McCaffrey last month, the Panthers were limited to 36 yards on 17 carries.

“It’s all on us,” center Bradley Bozeman said. "We’ve got to pick up next week and get our running game back on track.”

DE Brian Burns. Despite Carolina's struggles as a team, Burns has had a stellar season with eight sacks through 11 games. Burns has never recorded 10 sacks in a season — he has twice finished with nine — but this could be the season for “Spiderman” to reach that goal. Burns' production is the main reason the Panthers declined an offer to trade him before the deadline for two first round draft picks.

CB C.J. Henderson. The Panthers traded to get the former top 10 pick by the Jacksonville Jaguars last year, but he's failed to live up to expectations in Carolina and is now in danger of losing his starting job.

When asked to evaluate Henderson's play against the Ravens, Wilks said “not good enough.”

“C.J. has too much talent, as we have spoke about on several occasions, and he has the ability to get up to the line of scrimmage and challenge any receiver in this league,” Wilks said. "So we have to make sure to get that done."

The Panthers were able to get S Jeremy Chinn back on the field and it made a world of difference as Carolina held the Ravens to just three points through the first three quarters. ... LB Cory Littleton left Sunday's game with an ankle injury, and his status for the Broncos is unclear.

3 — Number of Carolina turnovers in the final nine minutes of its loss to the Ravens.

Wilks said the Panthers are not ready to start playing younger players to see what they can do, emphasizing the goal is still winning games. “As long as I'm in this particular role it will always be about now," Wilks said. “I'm trying to put us in the best position to win."