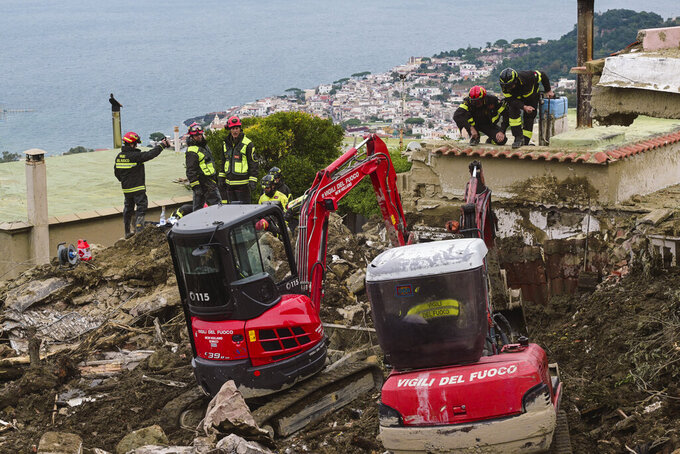 Salvatore Laporta, ASSOCIATED PRESS
Search teams work on a landslide in Casamicciola, on the Italian resort island of Ischia, in southern Italy, Wednesday, Nov. 30, 2022, which killed eight people and left four missing where a big chunk of the Mount Epomeo detached destroying houses and pushing vehicles down into the sea. (AP Photo/Salvatore Laporta)

MILAN (AP) — Search teams on Thursday recovered three more bodies buried under mud and debris from a weekend landslide on the Italian resort island of Ischia, raising the death toll to 11. One person remains missing.

The Naples prefect identified one of the victims as the father of three children whose bodies had been previously recovered, and another as the companion of a woman who had been found dead over the weekend. The body of a third victim, a woman, was in the process of identification.

Exceptional rainfall triggered a landslide above the Ischia port town of Casamicciola before dawn on Sunday, burying victims under mud and debris. Some 30 buildings were inundated by the massive landslide, which amassed enough force to push cars and buses into the sea.

The disaster has raised questions about building standards and illegal construction on Ischia, but also along the entire Italian peninsula, as climate change triggers more exceptional storms in a territory that is susceptible to flooding, landslides and earthquakes.