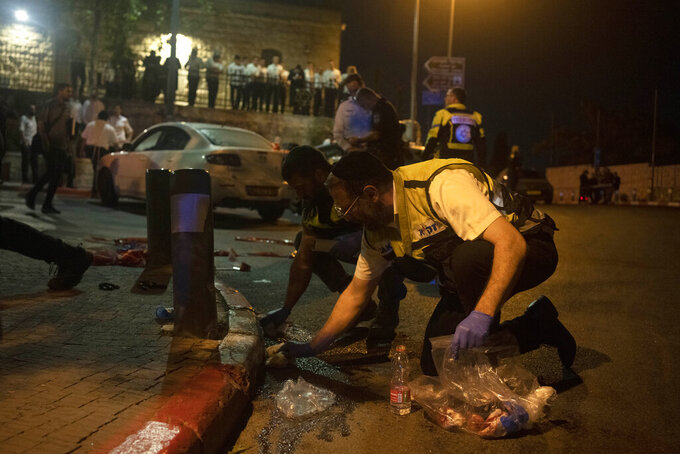 Maya Alleruzzo, ASSOCIATED PRESS
Volunteers with Zaka rescue service clean blood from the scene of a shooting attack that wounded several Israelis near the Old City of Jerusalem, early Sunday, Aug. 14, 2022. Israeli police and medics say a gunman opened fire at a bus in a suspected Palestinian attack that came a week after violence flared up between Israel and militants in Gaza. (AP Photo/ Maya Alleruzzo)

JERUSALEM (AP) — Israeli police shot and killed a Palestinian man on Monday, claiming he had attempted to stab officers during a raid in east Jerusalem.

The officers were conducting a search for illegal weapons in the east Jerusalem neighborhood of Kafr Aqab, police said. When officers approached the home, the man, armed with a knife, tried to stab them, police alleged. They fired on the suspect and he was later pronounced dead, police said.

Ibrahim al-Shaham, the man's father, told journalists that troops pounded on the door of their house at 3:30 a.m. and then used explosives to blow up the door to the home. Al-Shaham said police fired three bullets, one hitting his son, Mohammed, 21, in the head. Al-Shaham said his son was left bleeding on the floor of the house as police searched the apartment.

He denied that his son attempted to stab the officers, and said that the police found no weapons in the home.

Senior Palestinian official Hussein al-Sheikh called for an “immediate and urgent international investigation” into the the “crime of execution” of al-Shaham.

The incident came a day after a Palestinian gunman opened fire at a bus outside Jerusalem’s Old City, wounding eight, among them U.S. citizens.

The U.S. State Department condemned the Jerusalem attack late on Sunday, and said at least five of the victims were American citizens. “We remain in close contact with our Israeli partners and stand firmly with them in the face of this attack,” said State Department spokesman Ned Price.

A day after the cease-fire halted the worst round of Gaza fighting in more than a year, Israeli troops killed three Palestinian militants and wounded dozens in a shootout that erupted during an arrest raid in the city of Nablus in the occupied West Bank.