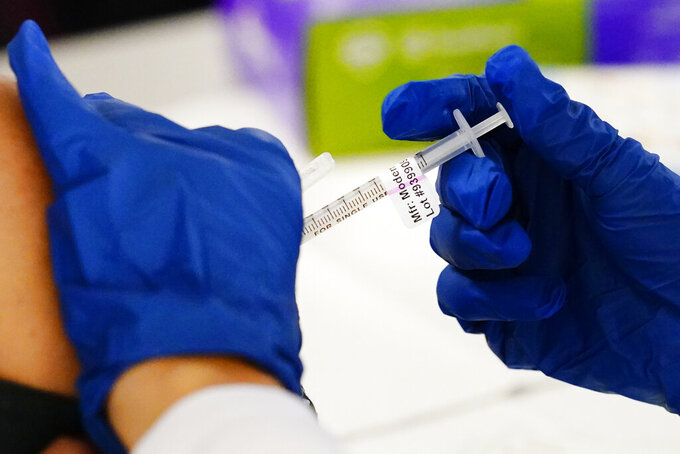 Matt Rourke, ASSOCIATED PRESS
FILE - A health worker administers a dose of a Moderna COVID-19 vaccine during a vaccination clinic in Norristown, Pa., Tuesday, Dec. 7, 2021. Moderna on Thursday, April 28, 2022, asked U.S. regulators to authorize low doses of its COVID-19 vaccine for children younger than 6, a long-awaited move toward potentially opening shots for millions of tots by summer.(AP Photo/Matt Rourke, File)

COVID-19 vaccines and tests for the virus continue to boost CVS Health and the health care giant raised its annual forecast after yet another strong quarter.

The drugstore chain and pharmacy benefit manager also processed more prescriptions and added customers to its health insurance business in a better-than-expected performance.

CVS Health said it also administered more than six million tests in the first quarter, and its drugstores got a boost from customers buying additional test kits to take home as the omicron surge of the virus peaked at the start of the quarter.

The vaccines and tests are bringing more customers into CVS Health drugstores, but that advantage may be starting to wane, said Neil Saunders, who follows the company as managing director of GlobalData.

“It is reasonable to question how long it will continue to deliver,” Saunders said in an email.

COVID-19 vaccination rates have slowed nationally, and CVS Health leaders told analysts Wednesday that they expect the number of vaccinations they administer this year to drop about 70%, to around 18 million.

CVS operates one of the nation’s largest drugstore chains with nearly 10,000 retail locations. It also runs prescription drug plans for big clients like insurers and employers through a large pharmacy benefit management business.

It also provides health insurance for more than 24 million people through its Aetna arm.

That health insurance business has added 674,000 customers since the end of last year. But the segment saw its adjusted operating income drop slightly in the first quarter, partly because medical costs are returning to normal levels.

Quarterly net income climbed 4% to $2.31 billion. But operating income slipped due to a $484 million settlement the company reached with the state of Florida to settle opioid-related litigation.

Overall, the company posted adjusted earnings of $2.22 per share, beating analyst projections for $2.17.

CVS Health said it now expects per-share earnings of between $8.20 and $8.40 this year.

The new outlook mostly eclipses Wall Street projections of $8.26 per share, according to FactSet.

Company shares slipped in February after the company reported fourth quarter results that easily topped expectations but didn’t hike its forecast for the year, citing the pandemic’s unpredictable nature.

Shares of CVS Health Corp., based in Woonsocket, Rhode Island, climbed 1% to $96.90 Wednesday.