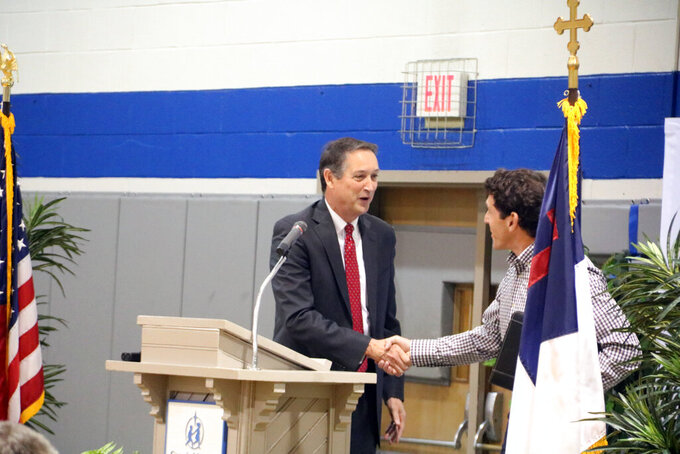 GREENWOOD, S.C. (AP) — There are decades of memories on the “hallowed ground” of Connie Maxwell Children’s Ministries.

Thirteen decades, to be exact.

Connie Maxwell hosted staff, alumni and others in the community for its annual picnic Aug. 4, made extra special by this year’s 130th anniversary.

The gathering involved an acknowledgement of some of the memories made.

Tim Duncan, vice president for programs and services, told picnic attendees sitting in the gym that they were on hallowed ground.

“And over the last several years, I’ve kind of moved around, but I’ve always had a heart for working with the kids. And what was amazing about the hallowed ground you’re on is if you walk out these doors, you’ll see decades upon decades of pictures of children in basketball uniforms.”

He talked about how he came to coach basketball, and said some of the best memories were made in the gym.

“We have family members that come in — grandmothers, grandfathers, adopted family members come in, school teachers come, all to support these kids while they’re out here playing basketball together,” he said.

Eric Taylor, vice president for advancement, talked about his memories of Connie Maxwell, which started when his parents because house parents and moved the family there when he was 9.

“In an instant, my life changed forever, for the better,” he said, adding that he went from being an only child to having 300 playmates.

He recalled how, at the time, house parents got one weekend off per month, and his family would load into the car to head to their home church in Woodruff.

“It couldn’t have been more than three or four weekends that when my mom and dad pulled out of the driveway on their weekend off, I was staying back waving at them,” he said.

“And I said ’You tell everybody I said hello and I love them, I’m staying here, this place is great,” he said.

“I thought I was in heaven and I was, right here at Connie Maxwell Children’s Home.”

The picnic also featured the presentation of proclamations from the City of Greenwood and Greenwood County.

It also featured a rendition of “Happy Anniversary To You,” led by Connie Maxwell President Danny Nicholson, who also talked about his parents and his story of being adopted.