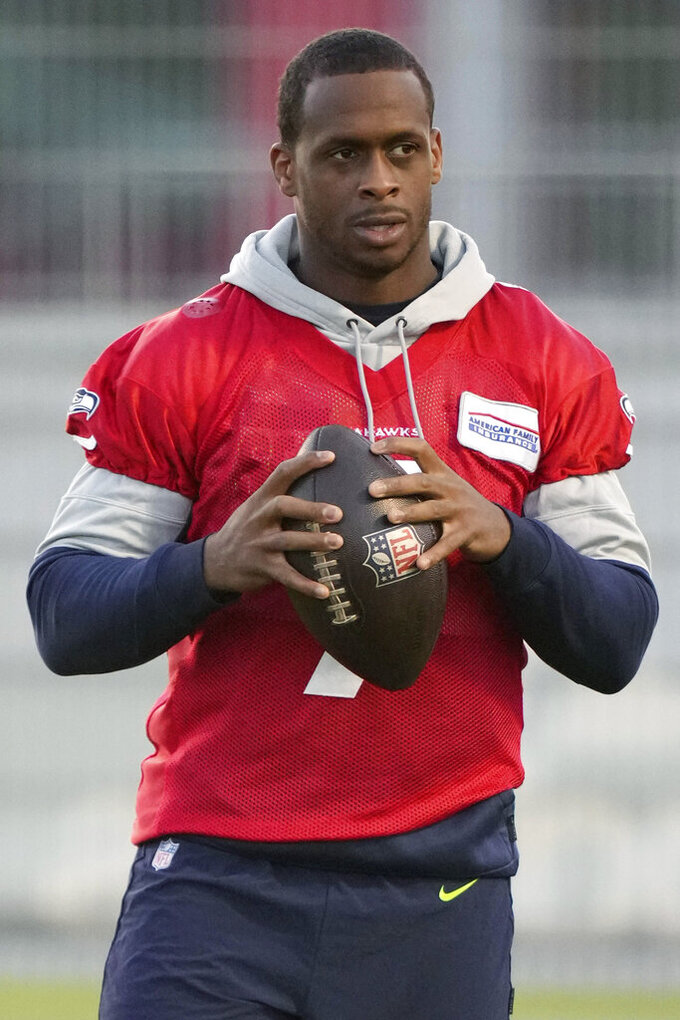 DENVER (AP) — The most lopsided trade in NFL history sent Herschel Walker to Minnesota for two fistfuls of players and draft picks that served as the pillars of the Dallas Cowboys' dynasty of the 1990s.

The Russell Wilson trade isn't quite so cockeyed, but eight months in it sure looks as one-sided as any deal since the Walker washout that Jerry Jones immediately dubbed “The Great Train Robbery."

What Denver has 33 years later might very well go down as "The Big Bamboozle.”

Walker wasn't exactly a bust in Minneapolis, scoring 25 touchdowns in 2 1/2 seasons with the Vikings. But he was long gone by the time the trade blossomed for the Cowboys after Jones and Jimmy Johnson drafted Emmitt Smith, Alexander Wright, Russell Maryland, Alvin Harper, Dixon Edwards, Robert Jones, Kevin Smith and Darren Woodson on their way to three Super Bowl parades.

Wilson hasn't been anything like the Broncos expected when GM George Paton sent first- and second-round picks this year and next along with three players for the nine-time Pro Bowl quarterback who was supposedly still in his prime at age 33.

The $245 million extension he gave Wilson before the season only adds to the angst of Broncos fans who have watched a string of quarterbacks fail ever since Peyton Manning walked away to do game shows and commercials with his brothers after winning Super Bowl 50.

The Seahawks selected tackle Charles Cross in the first round and edge rusher Boye Mafe in the second with the premium picks they got from Denver. As it stands now, they’ll have the No. 6 overall selection in the 2023 draft thanks to Wilson's debacle of a Denver debut.

Not only that, but Geno Smith, Wilson's successor in Seattle, is having the kind of season everyone outside of Washington figured Wilson would have in the Rocky Mountains this year.

Smith has the surprising Seahawks tied with the 49ers atop the NFC West at 6-4. He’s completing a league-high 72.8% of his passes and has 17 touchdown throws and four interceptions in his first year as a starter since 2014.

With six losses in nine starts, Wilson is completing a career-worst 59.5% of his passes, is on pace for a career-high 57 sacks and has thrown just seven touchdown passes to go with five interceptions.

The Broncos are 3-7 and sitting in the basement of the AFC West after getting swept by the lowly Raiders and coach Josh McDaniels on Sunday.

The Seahawks are averaging 25.7 points per game with Smith at quarterback, just a tick more than the 25.3 they averaged during Wilson's tenure in Seattle.

Wilson's stunningly poor play in Denver prompted a reporter to ask him Sunday after the 22-16 overtime loss to the Raiders if the Broncos just aren't good enough to win these type of games.

Fans are starting to wonder if it's Wilson who isn't good enough anymore because the Broncos have lost six games by one score and are negating Denver's dominant defense by averaging just 14.7 points.

They'd be an NFL-best 9-1 right now if only they averaged in regulation the 19.7 points per game they did last year with Teddy Bridgewater and Drew Lock at quarterback.

Or the 20.2 they averaged the year before that when Lock led the league with 15 interceptions.

Wilson hasn't meshed with rookie head coach Nathaniel Hackett, who has now hired somebody to help him manage the games and appointed another member of his staff to call the plays.

After stubbornly refusing for weeks to relinquish play-calling duties, Hackett relented and turned them over to Klint Kubiak, his QBs coach and passing game coordinator.

The switch paid immediate dividends when Wilson directed his first opening-drive touchdown with the Broncos, a 92-yard beauty that was followed by nine drives that either came up empty or ended in field goals.

Hackett recently added 7-on-7 drills at practice after ditching the training camp staple last summer, robbing Wilson of hundreds, if not thousands, of throws to develop a rapport and rhythm with his receivers.

Now a lot of them are hurt along with several offensive linemen. But that's not all that ails Denver's sputtering offense.

Wilson has made bad decisions and poor throws in crunch time that have cost the Broncos in losses to the Colts, Chargers, Jets, Titans and now, the Raiders.

He keeps missing open receivers either with his eyes or his arm and has only shown flashes of the vintage Russell Wilson the Broncos thought they were getting last spring.

The Broncos have managed just four touchdowns at home so far, the fewest for any stretch of five home games in the franchise's 63-year history.

They're 0-3 in overtime, including Sunday's game when Wilson didn't even get to touch the ball in extra time after committing a crucial blunder just after the 2-minute warning in the fourth quarter when the Raiders were out of timeouts.

He threw incomplete on third-and-10 rather than sliding down and taking the sack that would have burned another 40 seconds off the clock. That left Derek Carr with 1:43 to get the Raiders in field goal range to tie it.

"I think that we’re on the learning end of the experience of how to get back to winning," Wilson said. “Sometimes it’s a journey; sometimes it’s an ugly one, sometimes it’s a tough one. What hurts probably more than anything else is that these games were close, one-score games. We have to be able to find ways to win them.”

Then, Wilson said something interesting.

“It's never good to lose," he said, “but it's almost like, man, at least somebody kick our butt."

The Broncos have two games left against Patrick Mahomes and the Kansas City Chiefs, who have beaten them 13 consecutive times and are scoring 30 points a game, more than double Denver's average output.