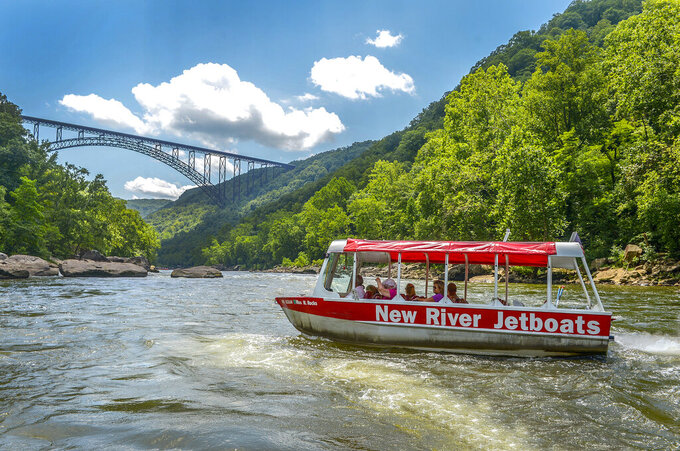 KENNY KEMP, ASSOCIATED PRESS
With the New River Gorge Bridge in the background, the Miss M. Rocks idles in the outflow of the New River's Old Nasty rapids to give passengers a view of the bridge and a whitewater raft group approaching, Wednesday, July, 20, 2022 near Fayetteville, W.Va.. (Kenny Kemp/Charleston Gazette-Mail via AP)

ANSTED, W.Va. (AP) — Bobby Bower bought New River Jet Boats at a time that would turn out to be what he termed “the perfect storm of a bad time to start a business.”

“It was early 2020, just before COVID hit,” he recalled as he sat in the shade at the shoreline passenger check-in station at Hawks Nest State Park for the 8-mile roundtrip jet boat excursions his company offers.

The virus arrived in West Virginia in March 2020, forcing a delay in the planned opening of the excursion season for his jet boats, but Bower eventually got the green light to begin running trips.

In July, soon after his delayed debut season got underway, Bower received word from the company that operates Hawks Nest Dam that it would soon begin a 25-foot drawdown of Hawks Nest Lake to accommodate repairs and perform maintenance. Since his business could not operate on a narrow channel clogged with newly emerged boulders and surrounded by mud flats, Bower’s abbreviated first season abruptly came to an end.

By the start of the 2021 season, repairs to the dam and a downriver hydropower plant were complete, the lake had refilled and Bower was more than ready to put boats on the water.

“Our second year started out super strong. The Gorge had just gotten its National Park brand, which helped us bring record numbers of people here through May,” the jet boat company’s opening month, Bower said.

But in early June, a state park employee discovered a safety issue while making a routine morning inspection of the aerial tramway that carries jet boat passengers from the Hawks Nest Lodge to the New River Jet Boats marina. Park officials ordered the 50-year-old tramway closed until repairs could be made, later opting to replace the tram along with a similar system at Pipestem Resort State Park. Contracts have yet to be awarded for replacement trams.

Since the Hawks Nest tramway was closed, the state parks system has helped keep New River Jet Boats afloat by providing a shuttle van and driver to take jet boat passengers from Hawks Nest Lodge to the New River Jet Boats marina and back. The alternate route to the marina involves a one-mile drive on U.S. 60 to Ansted, then a four-mile descent of Mill Creek Road to the marina.

“It’s a beautiful ride following Mill Creek down to the marina and along the way, the driver gives people a taste of the great history of the area,” Bower said.

“I appreciate the state providing the shuttle van, and I have great faith that it will provide the park with a new tramway sometime soon,” Bower said. “Even with the challenges we’ve had, we’re running record numbers on the boat. But with a tram back in operation, it will dramatically increase visitation and make it more attractive for people to spend more time down here on the lake, and we can roll out rental kayaks, rowboats and paddleboards.”

It takes about an hour for passengers to ride the shuttle van from Hawks Nest Lodge to the marina, check in with the staff at New River Jet Boats and make the roughly half-hour roundtrip jet boat ride on Hawks Nest Lake from the dam to Old Nasty Rapids in the shadow of the New River Gorge Bridge.

Most of the trip takes place on the flat water of Hawks Nest Lake — the portion of New River backed up by Hawks Nest Dam — at speeds of more than 30 mph. Excursions provide access to a roadless section of canyon, passage under a railroad trestle and views of an assortment of imaginatively designed boat-in fishing camps perched on boulders and ledges along the shoreline.

Near the turnaround point of the excursions, jet boats pass Teays Landing, the take-out point for Adventures on the Gorge raft trips, and enter the outflow waves from Class III Old Nasty Rapid, the New River’s final stretch of whitewater before entering Hawks Nest Lake.

The trips take passengers to within a mile of the New River Gorge Bridge, which can be seen during most of the upriver leg of each excursion. The steep slopes bordering the waterway upstream of the marina are part of New River Gorge National Park and Preserve.

“We see blue herons on most of our trips, and we’ve seen a couple of juvenile bald eagles, some ospreys and peregrine falcons on other trips this year,” Bower said.

A West Virginia native who grew up in Beckley, Bower has been working on the river since 1988, starting as a whitewater rafting guide, working into management positions for outfitters and serving for many years as director of the West Virginia Professional River Outfitters.

He is also the founder and owner of Fayetteville-based Rapid Approach Rescue, maker of inflatable swift water rescue boats, and manager of Rocky Mountain Rafts and Pro River Outfitters in Oak Hill.

“There are a lot of business opportunities here in West Virginia,” Bower said. “You just have to go out and find them.”