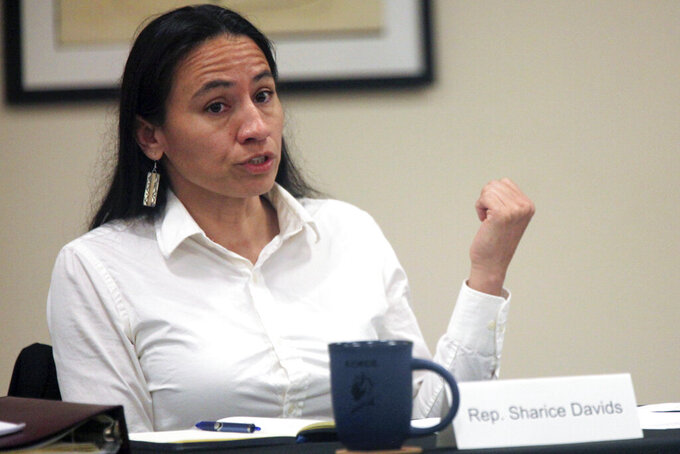 But the dynamic changed in June, when the U.S. Supreme Court overturned Roe v. Wade. Kansas voters responded in August by overwhelmingly rejecting a ballot measure expected to lead to more restrictions or a ban on abortion.

The magnitude of that vote has left Davids and other Democrats optimistic. That’s why she is spending the final stretch of the campaign focused on abortion, attempting to keep the same abortion-rights supporters who turned out to vote in August energized to do so again in November.

It's a delicate task, asking voters who may fault Democrats for rising housing and grocery prices to nonetheless support Davids for Congress.

“I think this has more to do with control and limiting people’s rights,” said swing voter Tanner Klingzell, a 42-year-old from the suburb of Prairie Village who says he is fiscally conservative but socially progressive. He supports abortion rights and says, “I just don’t feel comfortable voting for Republicans.”

The Supreme Court's abortion ruling has rewritten the script in districts around the country, and both Davids and Republican challenger Amanda Adkins must win over independents and GOP moderates to win the one swing congressional district in an otherwise red state.

Davids became the first lesbian Native American in Congress when she rode suburban anti-Trump sentiment to office in the 2018 election. Her background as a mixed martial arts fighter drew national interest, and Republicans initially tried to group her with “The Squad” of new liberal House members. Those efforts fell flat as she focused on such non-divisive issues as road projects, prescription drug prices and high-speed internet for rural areas.

Adkins, a former corporate executive and Kansas GOP chair, is hitting Davids hard on pocketbook issues, a tactic Republicans nationally expect to carry them back to a House majority. She's also started highlighting crime and border security. She held a news conference on those issues Monday, days after House Republican leader Kevin McCarthy released Republicans' “Commitment to America” agenda, which promises to fight inflation but also to “protect the lives of unborn children.”

The two have faced off before. Davids defeated Adkins in 2020 by 10 percentage points, but that was before redistricting after the 2020 census. While Democrat Joe Biden would have prevailed in the new district in 2020, his margin would have been roughly half the 10 percentage points he racked up in the old district — and that’s likely true for Davids as well. If Adkins’ percentage of the vote in the suburbs is a few points higher this year than in 2020, she can win.

In suburban Overland Park, Andrea Calvo, a 33-year-old freight-company accounts manager, is hoping Republicans emerge a little stronger from the November election because, in her view, “they have proven to be able to handle the economy better.”

While Calvo, a Republican, doesn’t see herself as a moderate, she voted in August against the proposed anti-abortion amendment to the Kansas Constitution. She sees Adkins’ support for it as “definitely a problem.” But it’s not a deal-breaker.

“It’s all about the economy at the end of the day for me,” she said.

The two campaigns, the parties and political groups are now on track to spend about $8 million on television ads.

Davids and her backers are painting Adkins as an extremist for supporting the proposed amendment that voters rejected in August. It would have removed protections for abortion from the state Constitution, which would have allowed the state Legislature, dominated by abortion opponents, to greatly restrict or ban abortion.

Davids' strong, public opposition to the Kansas anti-abortion measure contrasts with three decades of Democratic candidates soft-pedaling their support for abortion rights in most areas of the state. Abortion has been a dominant issue in Kansas politics since the 1991 anti-abortion “Summer of Mercy” protests outside Dr. George Tiller's clinic in Wichita. Tiller was among the few doctors known to perform abortions late in pregnancy and was shot to death in 2009 by an anti-abortion zealot. Anti-abortion groups have been powerful forces in state politics.

Even with the 3rd District's new, more Republican leanings, 67.5% of its voters opposed the Kansas anti-abortion measure in the August abortion referendum.

“They were very engaged and sent a strong message about us not wanting to have politicians making our decisions for us,” Davids said.

Adkins describes herself as a Catholic who has “always been pro-life” and “100% committed to protecting life at every stage.” But Adkins said she respects the August vote and opposes federal laws on abortion, saying the issue should be decided at the state level.

“It should not be a federal issue, and Sharice Davids still is focusing on it as a federal issue,” Adkins said after a recent suburban meet-and-greet. Davids voted last year for a Democratic measure to guarantee abortion rights across the U.S. and override state restrictions.

Adkins has not been specific about how far she thinks abortion law should go in Kansas, which bans most abortions at the 22nd week, but said Monday that she would favor any new, incremental state measures that would reduce the number of abortions.

In the new, rural parts of the 3rd District, Democrats say the abortion ruling means volunteers are energized. But Republican state Rep. Samantha Poetter Parshall said that Davids is an “extremely hard sell,” especially with conservative farmers. Even Democrats tend to take more conservative positions on issues such as gun rights, she said.

“Also, taxes — people are extremely upset with how high their taxes are right now,” she said.

But about 85% of the district’s voters still live in the suburbs, where centrist and conservative Republicans have feuded for decades, and voters have been electing more Democrats in recent years.

Former U.S. Rep. Kevin Yoder, the four-term GOP incumbent ousted by Davids in 2018, praised Adkins as a candidate, but he pointed to the dominance of those suburbs in the district as the reason the race remains challenging for the GOP.