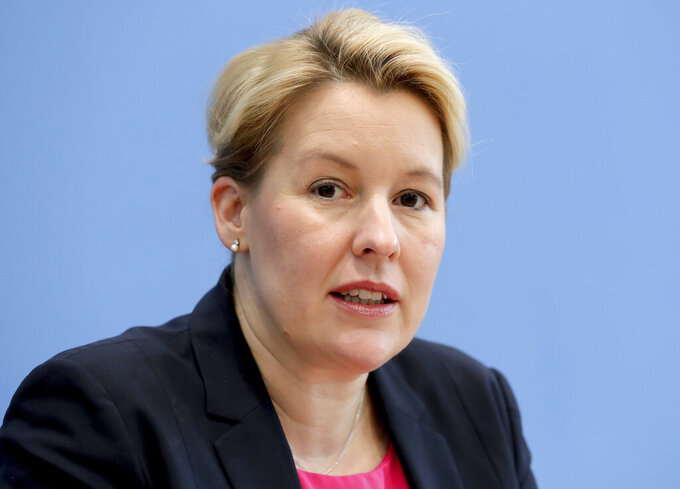 BERLIN (AP) — A Berlin university on Thursday stripped a prominent former German minister of her doctorate following a long-running saga over plagiarism allegations that led to her resignation last month.

Franziska Giffey quit as Germany's minister for women and families in mid-May, but the center-left Social Democrat is still a leading candidate to become Berlin's mayor in an election in September.

Berlin's Free University said it had concluded that Giffey's doctorate was obtained with “deception over the independence of her academic achievement.” It said her thesis used texts and references from other authors without sufficiently labeling them as such.

Doctorates are highly prized in Germany and have caused senior politicians trouble before.

In 2011, then-Defense Minister Karl-Theodor zu Guttenberg lost his doctorate and quit when it emerged that large parts of his thesis weren’t his original work. Two years later, then-Education Minister Annette Schavan resigned after a university withdrew her doctorate.

Allegations of plagiarism led to the Berlin university reviewing Giffey’s 2010 dissertation on the policy of the European Union’s executive body, the European Commission. Giffey said in 2019 that she would resign from the government if her Ph.D. was revoked. The university initially decided to issue a reprimand, but not to revoke her title.

In November, the university said it would reconsider the decision after an expert’s report raised questions about whether it was entitled only to issue a reprimand. Giffey said then she would stop using the academic title “doctor.”

“I still stand by my statement that I wrote the work I submitted in 2009 to the best of my ability,” Giffey said Thursday. She added that mistakes she made weren't intentional or planned, but she accepts the university's decision, news agency dpa reported.