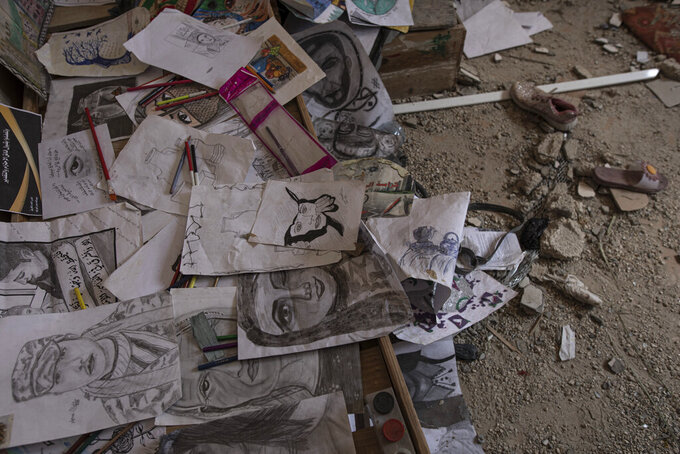 Fatima Shbair, ASSOCIATED PRESS
Drawings by Duniana al-Amour are seen in her damaged room which was hit by Israeli strike, east of Khan Yunis, in the southern Gaza Strip, Monday, Aug. 10, 2022. Al-Amour, a 22-year-old Palestinian woman who had retreated into her artistic pursuits during Gaza's past wars was among the first people killed by Israeli strikes in the latest round of violence. Shrapnel tore through her bedroom during Israel’s surprise opening salvo last Friday, hours before militants fired any rockets. (AP Photo/Fatima Shbair)

KHAN YOUNIS, Gaza Strip (AP) — When Israeli bombs began falling last week, 22-year-old Duniana al-Amour ran into her room and tried to escape into her art and drawing, just as she had during Gaza's past wars.

But this time around, her pencil never met the paper.

An Israeli shell struck outside her home on Friday, making her one of the first of at least 47 Palestinians — including 16 children — who were killed during three days of heavy fighting between Israel and the Islamic Jihad militant group. She was killed during Israel's surprise opening salvo, hours before militants had fired any rockets.

Her drawings, mostly black and white portraits of relatives, some killed in previous rounds of fighting in Gaza, can be seen in the shattered bedroom where she died. Her mother, her brother and two sisters-in-law were in another room baking bread and suffered only minor injuries. Days later, the bread sits out on a wooden tray — a still-life from the moment the shell hit.

One of her sisters-in-law, Simone, said al-Amour's life revolved around her art. “She painted whether she was happy or sad. She would bring a chair to the backyard, sit and draw. She drew all of us," Simone said.

Her death underscores the vulnerability of Palestinian civilians during the frequent conflicts, including four wars fought between Israel and the territory's militant Hamas rulers since they seized power in Gaza 15 years ago. The wars have killed more than 4,000 Palestinians, over half of whom were civilians, according to the United Nations. More than 100 people have been killed on the Israeli side.

Those killed during the latest violence include two senior Islamic Jihad commanders, one of whom Israel said it targeted in order to foil an imminent attack. But many civilians also perished, including as many as 16 who might have been killed by rockets misfired by Palestinian militants.

Islamic Jihad fired some 1,100 rockets, but the Israeli military said some 200 fell short and most of the rest were intercepted or fell in open areas. No Israelis were killed or seriously wounded in the latest round of fighting.

Gaza has also been under a crippling Israeli-Egyptian blockade since the Hamas takeover, which Israel says is needed to keep the militants from re-arming. Critics view the blockade, which severely limits movement in and out of the narrow seaside territory — home to more than 2 million Palestinians — as collective punishment.

Al-Amour had tried to escape Gaza's tribulations through art. Her relatives said she had little interest in politics and dreamed of making a Muslim pilgrimage to Mecca, in Saudi Arabia.

Her family home, nestled among farmland and olive groves near the border, was a bucolic escape from Gaza's densely-packed cities and refugee camps. It was also on the front line whenever a new round of fighting broke out.

The Israeli military said it “precisely attacked legitimate military targets” during the latest operation and made “every effort to prevent and minimize harm to civilians.” It did not immediately comment on the strike near al-Amour's home.

Israel destroyed several guard towers manned by Palestinian militants near the border, apparently with artillery or tank shells, including one about 500 meters (yards) from al-Amour's family home. The military distributed video showing some of the hits — the towers going up in smoke and the men inside vanishing in a flash.

All the family knows is that the shell that killed al-Amour came from the direction of the border fence. Mohammed al-Amour, Duniana's grieving brother, said that Israel, with its sophisticated surveillance and targeting capabilities, had to have known what it was aiming at.

“They brag about this technology," he said. "They know who is a civilian or not.”