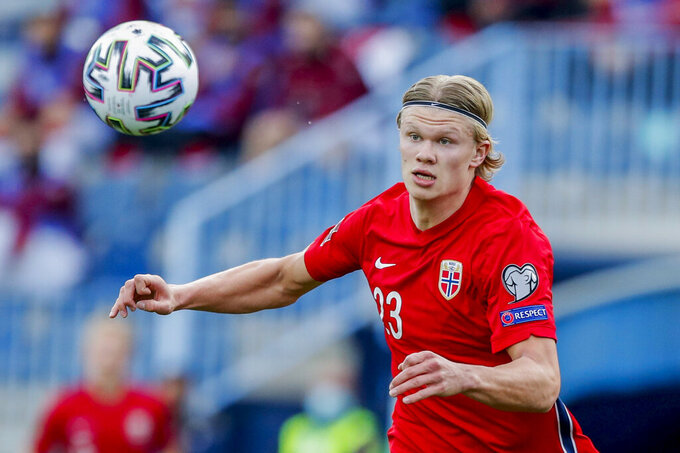 BERLIN (AP) — Not every big soccer star will be playing at the World Cup.

Some will be missing from the tournament in Qatar because of injuries or because their countries didn't qualify, including Ballon d'Or winner Karim Benzema of France and runner-up Sadio Mané of Senegal. Those two — voted the world's top two players this year — were ruled out of the World Cup with injury days before kickoff.

Other star names will also be watching from afar.

There's now no chance of Benzema adding a World Cup title to his Ballon d'Or award this year after he tore a left thigh muscle training with the French squad in Qatar days before the defending champion's opening game. The World Cup was meant to continue a remarkable comeback for Benzema, who did not play in France’s victorious 2018 World Cup campaign because he was still exiled from the team for his role in a sex-tape scandal. That led to a dramatic fall for Benzema but he had won back fans with a stellar season with Real Madrid and was back at his best for France. His injury came in his first full training session with the French World Cup squad, which is now missing five players.

Senegal's all-time leading scorer also saw his World Cup disappear when he injured his right leg in a club game for Bayern Munich two weeks ago. Senegal held out hopes that its talisman might recover and play some part later in the tournament and included him in its squad. But those hopes were quashed when Bayern announced this week that Mané has had surgery to reattach a tendon to his right fibula and is definitely out of the World Cup. Africa's best player will now watch his team while in rehab.

The 22-year-old Haaland has had a phenomenal start in his first season at Manchester City with 17 goals in his first 11 Premier League appearances, but Norway failed to beat the Netherlands in the team’s final qualifying game in Group G. Haaland, who had scored in the 1-1 draw when they met in Oslo, missed the decisive game because of an injury. The Dutch qualified as group winners with a 2-0 victory, while Norway was left in third place. Haaland has 21 goals in 23 games for Norway but he has to wait until at least 2026 for his country to reach its first World Cup since 1998.

Salah, who won the Golden Boot as the Premier League's top scorer alongside Son Heung-min last season, missed a penalty against Senegal in the shootout that eliminated Egypt from the World Cup playoffs. Salah blasted his attempt over the crossbar and former Liverpool teammate Sadio Mané kicked the winner for his team’s 3-1 victory. It was a repeat of Senegal’s win on penalties in the African Cup of Nations final the month before. This season, Salah has scored four goals in his first 12 matches as Liverpool has struggled for wins.

France has also lost Paul Pogba, who was ruled out of the tournament because of ongoing right knee problems. The 29-year-old Pogba played a vital part in France’s World Cup success four years ago, but has yet to play a game this season since his last official match in April. After returning to Juventus from Manchester United in the offseason, Pogba tore his meniscus during the Italian club’s preseason tour of the United States in July. He initially decided against having an operation, but then had surgery on his right knee in early September. Pogba’s agent, Rafaela Pimenta, said Monday that he “needs more rehabilitation after his operation.” Pogba has also been mired in an extortion scandal involving his older brother and childhood friends.

Kante hasn't played for his club or his country since August, and Chelsea confirmed last month that the midfielder will miss the tournament while recovering from surgery on a hamstring injury. Widely regarded as one of the world’s best midfielders, Kante played a key role alongside Pogba in France’s run to the 2018 title. Another France midfielder, Boubacar Kamara, was already ruled out because of injury.

Austria didn't qualify for the World Cup after losing to Wales in the playoffs. Gareth Bale scored two goals in the 2-1 victory that ended his Real Madrid teammate’s hopes of appearing at soccer’s biggest tournament for the first time. The 30-year-old Alaba, who joined Madrid from Bayern Munich in 2021, captained Austria at last year's European Championship, where the team lost to eventual champion Italy in the round of 16.

Díaz’s World Cup hopes were over even before he injured his knee while playing for Liverpool because Colombia finished sixth in South American qualifying. The 25-year-old Díaz, who instantly became a Liverpool favorite after his transfer from Porto in January, still hasn’t played at a World Cup. He has scored eight goals in 37 appearances for Colombia. James Rodríguez and “El Tigre” Radamel Falcao will also miss the tournament.

Arguably the best goalkeeper in the world won’t be at the World Cup after Italy surprisingly failed to qualify for the tournament — again. Donnarumma was the player of the tournament when he helped Italy win Euro 2020, but he was unable to stop Aleksandar Trajkovski’s injury-time winner for North Macedonia in the World Cup playoffs in March. Italy also failed to qualify for the 2018 World Cup in Russia. Donnarumma, considered the heir to the great Gianluigi Buffon, will get his chance again. Despite already making 49 appearances for Italy, he’s only 23 years old.

Jota said “one of my dreams collapsed” when it was confirmed he will miss the World Cup with a calf injury sustained in Liverpool’s 1-0 win over Manchester City on Oct. 16. He had already missed the first month of the season because of injury. Liverpool coach Jürgen Klopp said Jota faced “months” to recover. Portugal teammate Pedro Neto is also out after sustaining an ankle injury while playing with Wolverhampton.