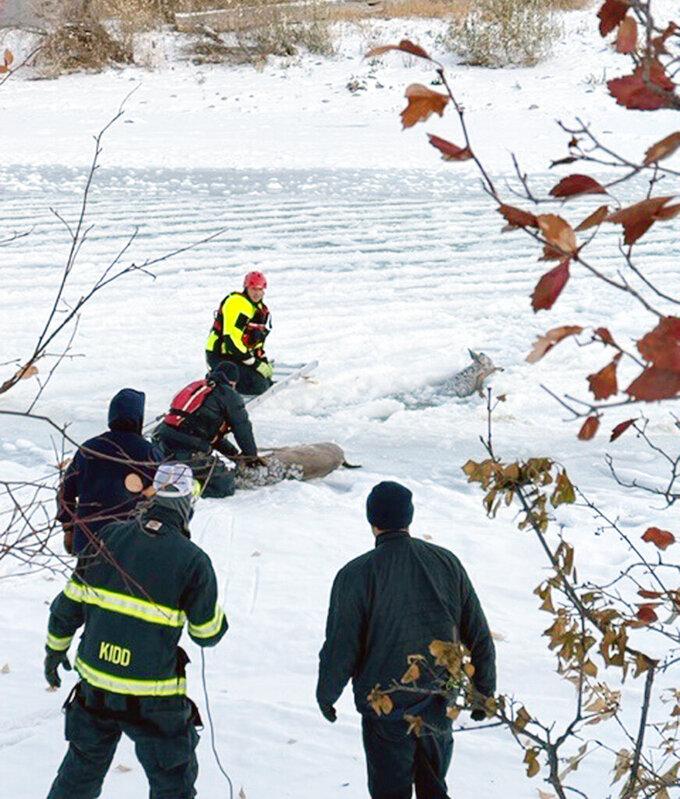 Khai Tran, ASSOCIATED PRESS
In this photo provided by the Missoula Police Department, City of Missoula firefighters use a ladder and ropes to rescue a doe and her fawn from the icy Clark Fork River in Missoula, Mont., on Friday, Nov. 18, 2022. The temperature at the time of the 7:30 a.m. rescue was minus 3 degrees Fahrenheit (minus 19 Celsius), according to the National Weather Service. The deer darted up the bank and ran away after they were pulled from the water, senior firefighter Brett Cunniff said. (Khai Tran/Missoula Police Department via AP)

“They darted up the bank and ran east,” City of Missoula senior firefighter Brett Cunniff said. “They took off on their own. We’re assuming they’re fine.”

Police and firefighters responded to a report that deer had fallen through the ice into the river at about 7:30 a.m., the fire department said in a social media post. The temperature at the time was minus 3 degrees Fahrenheit (minus 19 degrees Celsius), according to the National Weather Service.

Fire crews are trained in ice rescues and used a ladder and ropes to pull the deer to safety, Cunniff said.

Rescuing animals that have fallen through the ice on the river is not uncommon, Cunniff said, but it usually involves dogs. This was the first time he's helped rescue deer, he said.