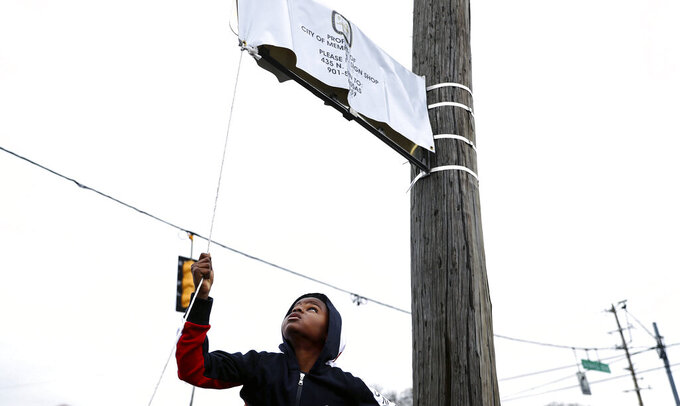 Patrick Lantrip, ASSOCIATED PRESS
FILE - Young Dolph's son, Tre Tre, helps unveil a new street sign at a street naming ceremony honoring Young Dolph in Memphis, Tenn., Dec. 15, 2021. A man charged with soliciting the killing of Young Dolph pleaded not guilty Thursday, Nov. 17, 2022, one year after the rapper and producer was shot to death while buying cookies at a bakery in his hometown of Memphis. (Patrick Lantrip/Daily Memphian via AP, File)

MEMPHIS, Tenn. (AP) — A man charged with arranging the killing of Young Dolph pleaded not guilty Thursday — one year after the rapper and record label owner was ambushed and shot to death while buying cookies at a bakery in his hometown of Memphis, Tennessee.

Hernandez Govan, 43, made a brief appearance in Shelby County Criminal Court in Memphis. He was arrested last week after he was indicted on charges including first-degree murder and conspiracy to commit first-degree murder in the killing of the rapper, who was 36 when he died. The judge scheduled Govan's next hearing for Dec. 16.

Govan is the third man charged in the Nov. 17, 2021, slaying of Young Dolph, whose real name was Adolph Thornton Jr. The killing in broad daylight stunned Memphis and shocked the entertainment world. Police said two men exited a white Mercedes-Benz and fired shots into Makeda’s Homemade Cookies, which is near the rapper's boyhood home in the Castalia neighborhood. Police released photos taken from surveillance video that captured the shooting, and authorities later found the car abandoned.

Justin Johnson and Cornelius Smith Jr., have pleaded not guilty to first-degree murder and other charges in the shooting and are being held in jail without bond. They are scheduled to appear in court on Jan. 20.

In a weekly newsletter, Shelby County District Attorney Steve Mulroy said Govan “solicited the murder and put it in motion.” But no evidence has been made public to support that statement, and a suspected motive has not been disclosed. The investigation is ongoing.

“I know that you all are wanting details, you're wanting facts, you're wanting sort of answers to some of these mysteries and things like that,” prosecutor Paul Hagerman told reporters after Thursday's hearing. “Even if we knew them, we couldn't tell you. As a matter of ethics and our requirements under the law, we've got to confine ourselves to what's made public.”

Govan's lawyer, Bill Massey, said he was seeking the prosecution's evidence in the case, which Massey said may not go to trial until after next year due to the amount of evidence and the number of defendants.

Known for his depictions of tough street life and his independent approach to the music business, Young Dolph was admired for charitable works in Memphis. He organized Thanksgiving turkey giveaways, donated thousands of dollars to high schools, and paid rent and covered funeral costs for people in the Castalia Heights neighborhood where he was raised.

His work as a rapper, producer and owner of the independent label “Paper Route Empire” took him away from Memphis, but the father of two had returned to the city days before his killing to visit a sick relative and organize a turkey giveaway that took place without him.

After Young Dolph's death, a section of a street near his boyhood home was renamed for him. A private funeral was held and he was honored during a public celebration at FedExForum, the home of the Memphis Grizzles of the NBA and the University of Memphis men’s basketball team.

City officials and community activists also pointed to the killing as a symbol of the scourge of gun violence in Memphis. Since the rapper's death, Memphis has seen several other high-profile killings this year, including the shooting of a United Methodist Church pastor during a carjacking in her driveway; the kidnapping and shooting of an elementary school teacher who police said was abducted during an early morning run; and a man's daylong shooting rampage that was partially livestreamed and led to the death of three people.

Young Dolph is one of several prominent hip-hop artists to be killed in recent years. His independent approach to the music business drew comparisons to Los Angeles rapper Nipsey Hussle, who was fatally shot in 2019. Other rappers who have lost their lives to gun violence since 2018 include XXXTentacion, Pop Smoke and, most recently, Takeoff, who was killed outside of a bowling alley after a party in Houston on Nov. 1.

In an article in The Atlantic dated Tuesday, rappers Too Short and E-40 called for the hip-hop community to find ways to come together and support each other amid the spate of gun deaths in the industry.

Young Dolph was born in Chicago and moved to Memphis with his parents when he was 2. He released numerous mixtapes, starting with 2008′s “Paper Route Campaign,” and multiple studio albums, including his 2016 debut “King of Memphis.” He also collaborated on other mixtapes and albums with fellow rappers Key Glock, Megan Thee Stallion, T.I., Gucci Mane, 2 Chainz and others.

Makeda's, the bakery where he was shot, was boarded up and closed before it reopened in September.