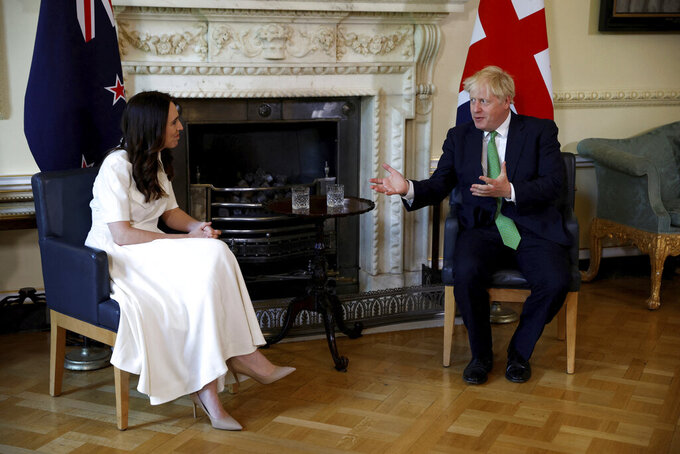 The trip came after both leaders attended the NATO summit in Madrid. They were also due to discuss security challenges facing the Indo-Pacific region.

It was Ardern’s first visit to the U.K. since the start of the coronavirus pandemic. New Zealand had enacted a strict border policy at the outset of the pandemic and only recently reopened its borders to international visitors.

She said at Johnson's No. 10 Downing St. residence that it was an “incredibly important milestone for us in New Zealand” that she was able to visit Europe, adding that it signified “we are open for business, for trade, for tourism.”

Ardern also said the meeting was an opportunity to discuss how the U.K. and New Zealand have responded to Russia's war in Ukraine.

“We have also provided our military aid via our partnership with you,” she told Johnson, who in turn praised her for “the very strong line that you take on Ukraine.”

Ardern and Johnson signed an agreement Friday making it easier for younger people to travel between the U.K. and New Zealand. The deal extends the Youth Mobility and Working Holiday programs, raising the maximum age limit for applicants from 30 to 35, and the maximum time limit people can stay in the host country will be increased from various durations to three years. The reciprocal visa programs are designed to give people a better understanding of each country.

The two leaders were also expected to discuss tackling online disinformation and deepening bilateral trade ties as well as agree on new measures to boost the two countries' ties in scientific research.

The U.K. and New Zealand signed a free trade agreement in February that is still going through the ratification process in both countries, following a similar deal with Australia in late 2021.

Johnson said the agreement slashes red tape, cuts tariffs on exports and creates opportunities for British businesses to travel and trade. But British farmers have said eliminating tariffs for agricultural products would expose sectors like beef, lamb and dairy to unfair competition.