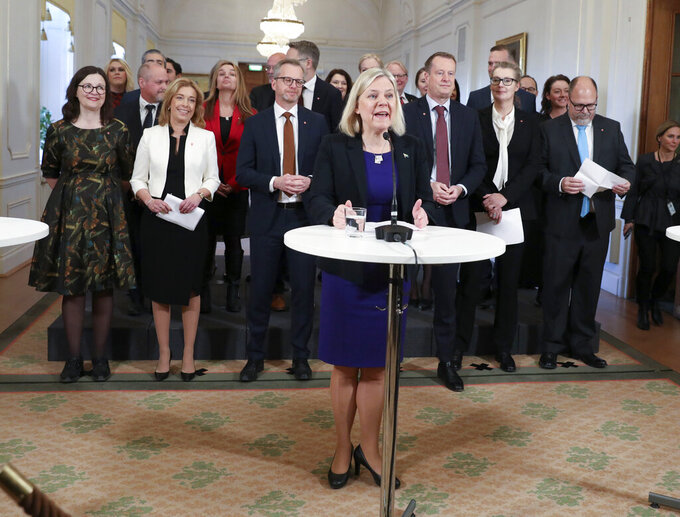 Soeren Andersson, ASSOCIATED PRESS
Swedish Prime Minister Magdalena Andersson, with her new cabinet members behind her, speaks during a press conference, in Stockholm, Tuesday, Nov. 30, 2021. Andersson, the first woman to ever hold that post in Sweden, has presented her one-party, minority government with only few changes compared to the previous one. (Soeren Andersson/TT via AP)

Andersson, who had been Sweden's finance minister, picked Mikael Damberg to replace her in that role. Damberg previously had been home affairs minister.

Andersson, the leader of the Social Democratic party, was elected again Monday as the Scandinavian nation’s head of government. She resigned last week after spending only seven hours as prime minister because a budget defeat prompted her then-coalition partner, the Greens, to quit her two-party coalition.

The move followed the rejection of her government’s budget proposal in favor of one presented by opposition parties, including the right-wing populist Sweden Democrats, which are rooted in a neo-Nazi movement.

On Monday, Andersson was named as prime minister even though 101 lawmakers voted in favor of her appointment and 173 were against it, with 75 abstentions. Under the Swedish Constitution, prime ministers can govern as long as a parliamentary majority — a minimum of 175 lawmakers — doesn't oppose them.

The Greens had held the environment and culture ministries in the previous government. Social Democrats Annika Strandhall and Jeanette Gustafsdotter took over those two posts.

Andersson has replaced Stefan Lofven as party leader and prime minister, roles he relinquished earlier this year. She was formally installed following an audience with King Carl XVI Gustav at a ceremony Tuesday at the Royal Palace of Stockholm that was also attended by the heir to the throne, Crown Princess Victoria.

Lofven, who had been leading the Swedish government in a caretaker capacity, stepped down earlier in the day.

Sweden’s next general election is scheduled for Sept. 11.