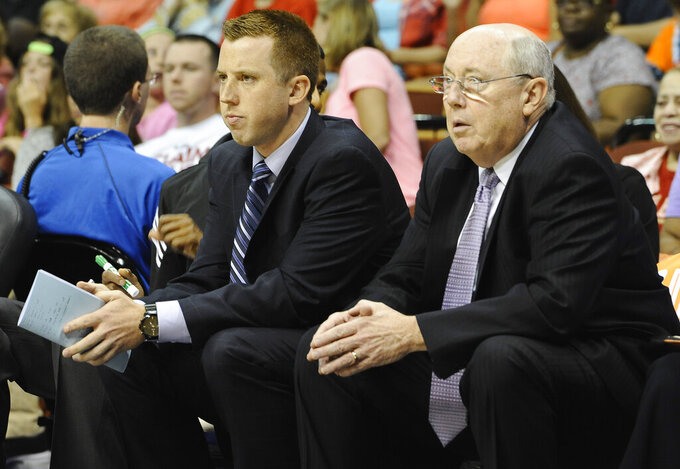 Jessica Hill, ASSOCIATED PRESS
FILE - Washington Mystics head coach Mike Thibault, right, sits with his son, assistant coach Eric Thibault, left, during the first half of a WNBA basketball game against the Connecticut Sun on Aug. 10, 2014, in Uncasville, Conn. Mike Thibault is retiring from his position as coach of the Mystics, the team announced Tuesday, Nov. 15, 2022. He will continue as general manager, and his son, Eric — who has been an assistant with the Mystics for a decade — will take over as head coach. (AP Photo/Jessica Hill, File)

WASHINGTON (AP) — Mike Thibault is retiring from his position as coach of the Washington Mystics.

The team announced Tuesday that Thibault will continue as general manager, and his son, Eric — who has been an assistant with the Mystics for a decade — will take over as head coach.

“I am proud to have been the head coach of the Washington Mystics the past 10 years," Mike Thibault said in a statement. “I feel like it is time to turn this team over to Eric and his coaching staff on the court. He is ready and prepared for it. I am looking forward to my continued role as GM.”

Thibault is the winningest coach in WNBA history after going 379-289. He was named coach and general manager of the Mystics in December 2012 and led the team to its first WNBA title in 2019. Washington went 22-14 this season and lost to Seattle in the first round of the playoffs.

Before joining the Mystics, Thibault was the coach of the Connecticut Sun, leading them to two WNBA Finals. He also led Washington to the finals twice. He made 16 playoff appearances with the Sun and Mystics, the most by any coach in league history.

“When we first hired Mike 10 years ago, we assigned him a large task: to make the Washington Mystics relevant in the WNBA," Monumental Sports & Entertainment founder and CEO Ted Leonsis said. "He more than delivered. In the last decade, we won a championship and have been a perennial playoff team while appearing in back-to-back WNBA Finals.”

“I’m ready to help the Mystics get back to the championship level that our fans, players and staff expect," he said. "D.C. has become home for my family and I, and I’m thrilled to be continuing our journey with this exceptional organization.”