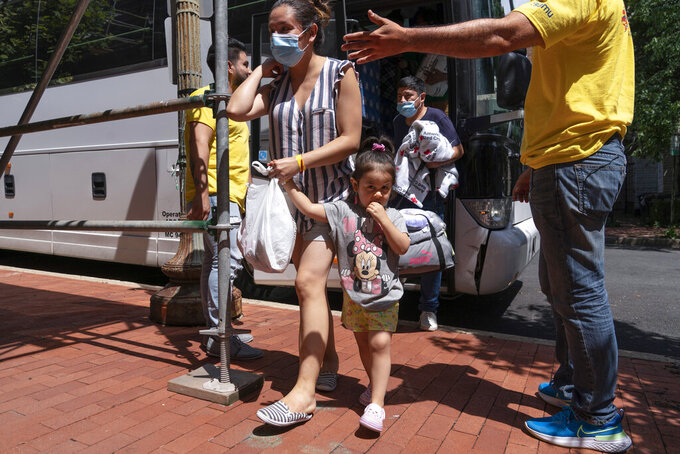 Jacquelyn Martin, ASSOCIATED PRESS
FILE - Silvia Moreno del Castillo, center, of Lima, Peru, holds her daughter Brisa, 3, by the hand, followed by her husband Gerardo Puente, as the family who is seeking asylum from Peru is greeted by Derick Alegria, left, and Orlando Andara, both with the nonprofit SAMU First Response, as a bus of asylum seekers who were sent from Arizona to Washington arrives, Aug. 11, 2022, to a church on Capitol Hill in Washington. A coalition of conservative-leaning states are making a last-ditch effort to keep in place a Trump-era public health rule that allows many asylum seekers to be turned away at the southern U.S. border. (AP Photo/Jacquelyn Martin, File)

WASHINGTON (AP) — A coalition of conservative-leaning states is making a last-ditch effort to keep in place a Trump-era public health rule that allows many asylum seekers to be turned away at the southern U.S. border.

Late Monday, the 15 states filed what's known as a motion to intervene — meaning they want to become part of the legal proceedings surrounding the public health rule referred to as Title 42.

The rule, first invoked by Trump in 2020, uses emergency public health authority to allow the United States to keep migrants from seeking asylum at the border, based on the need to help prevent the spread of COVID-19.

It's set to end Dec. 21, potentially upending border enforcement as Republicans are about to take control of the House from the Democrats following midterm elections and are planning to make immigration a central part of their agenda.

The states argued that they will suffer “irreparable harm from the impending Termination of Title 42” and that they should be allowed to argue their position well before the Dec. 21 termination date.

In a statement, a lawyer for the American Civil Liberties Union which has been arguing to end the use of Title 42 called into question the states' motivation for trying to keep the public health rule in force.

“Title 42 is not about asylum general border enforcement but public health, and these states cannot plausibly claim their real interest is about public health," said Lee Gelernt.

Immigrant rights' groups have argued that the use of Title 42 unjustly harms people fleeing persecution and that the pandemic was a pretext used by the Trump administration to curb immigration. A judge on Nov. 15 ruled for the immigrants rights' groups, calling the ban “arbitrary and capricious."

U.S. District Judge Emmet Sullivan ruled in Washington that enforcement must end immediately for families and single adults. The administration has not used Title 42 with regard to children traveling alone. The judge later granted a request by President Joe Biden's administration to set a Dec. 21 deadline for his order to go into effect, giving the administration five weeks to prepare for the change.

The 15 states argued that states such as Arizona and Texas that border Mexico as well as other states away from the border will face more immigration if use of Title 42 ends. The legal filings lay out a timeline to argue the matter further.

If Sullivan’s ruling stands, it could have a dramatic impact on border enforcement. Migrants have been expelled from the United States more than 2.4 million times since the rule took effect in March 2020.

Sullivan's ruling appears to conflict with another in May by a federal judge in Louisiana that kept the asylum restrictions in place. Before the Louisiana judge's decision, U.S. officials said they were planning for as many as 18,000 migrants a day under the most challenging scenario, a staggering number. In comparison, in May migrants were stopped an average of 7,800 times a day, and that was the highest of Biden’s presidency.

The ban has been unevenly enforced by nationality, falling largely on migrants from Guatemala, Honduras and El Salvador — in addition to Mexicans — because Mexico allows them to be returned from the United States. Last month, Mexico began accepting Venezuelans who are expelled from the United States under Title 42, causing a sharp drop in Venezuelans seeking asylum at the U.S. border.

The Biden administration initially deferred to the Centers for Disease Control and Prevention on keeping Title 42 in place, despite sentiment from some in the president's own party as well as activist groups who were skeptical about the public health necessity of the rule. In April, the CDC said it would end the public health order and return to normal border processing of migrants, giving them a chance to request asylum in the U.S. The Louisiana court then stayed that ruling only to have the Washington court last week put an end to the use of Title 42.