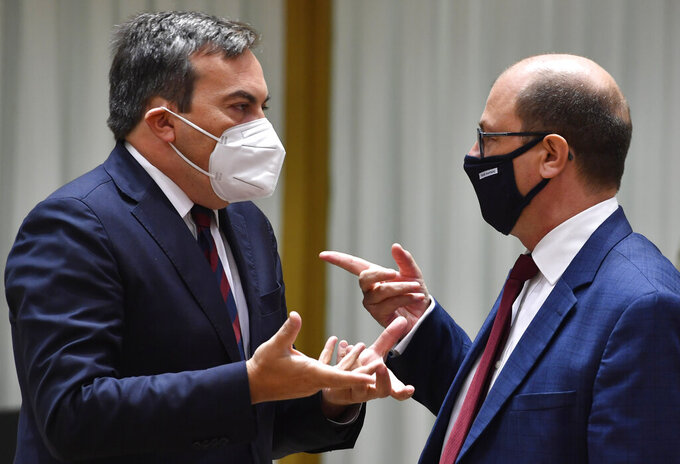 BRUSSELS (AP) — France’s European Union partners agreed Tuesday to put the country's festering dispute over a major Indo-Pacific defense deal between the U.S., Australia and Britain at the top of bloc’s political agenda, including at an EU summit next month.

The Indo-Pacific security pact known as AUKUS will see Australia cancel a multibillion-dollar contract to buy diesel-electric French submarines and acquire U.S. nuclear-powered vessels instead. The French government is suggesting it was betrayed by the deal.

“It’s definitely something that raised interest and will occupy us in the months to come,” Gasper Dovzan, Slovenia’s foreign affairs chief, told reporters after chairing a meeting of the bloc's European affairs ministers in Brussels.

European Commission Vice-President Maros Sefcovic said the chaotic U.S. troop pullout from Afghanistan last month and the surprise Australian security deal involving the United States are signs that “we need to focus more on the strategic autonomy” of the 27-nation EU.

Earlier, French European Affairs Minister Clement Beaune told reporters that he would urge other EU nations to consider delaying the bloc's trade pact negotiations with Australia, which have been underway since 2018.

No comment was made about that possibility after the meeting, but a discussion scheduled for Wednesday among EU envoys on an EU-U.S. Trade and Technology Council has now been taken off the agenda. The TTC – a forum for coordinating on trade, economic and technology issues – was launched when Biden visited Brussels in June. The council is holding its first meeting in Pittsburgh on Sept. 29.

The Europeans see the previously unannounced security deal as the second time in weeks that President Joe Biden has focused on an “America First” policy, similar in substance if not in tone to his predecessor Donald Trump, following the debacle at Kabul airport with the U.S. withdrawal.

It’s raised questions about Europe’s ability to provide for its own security outside of the U.S.-led NATO and resulted in appeals for the EU to develop a “strategic autonomy” from the military alliance that breaks with the dependence on American military and logistical muscle.

For France, it's a matter of trust.

“When you have your word, it has some value between allies, between democracies, between partners and in this case this word was not respected... so of course it creates a breach of trust," Beaune told reporters.

“We have to be firm, not as French but as Europeans, because it’s a matter of the way we work together as allies,” he said.

Germany’s European Affairs Minister, Michael Roth, said he has “great understanding for the disappointment felt by our French partners.”

“It’s once more a wake-up call for all of us in the European Union to ask how we can strengthen our sovereignty, how can we stand as one even in question related to foreign and security policy, and how can we use our economic and political clout in such a way that we can contribute to security and multilateralism,” Roth said.

But the ruckus also comes amid a busy election campaign period in Europe. Germans go to the polls on Sunday and France is holding elections in April.

EU nations bordering Russia or Belarus, such as Estonia, Latvia, Lithuania and Poland, count on the security guarantee provided by the U.S. through NATO and might opposed moves that complicate relations.

“What is important is to keep trans-Atlantic unity, because we believe this is our biggest strength and biggest value, especially vis-a-vis such countries as Russia and China,” Lithuanian deputy European Affairs Minister Arnoldas Prankevicius told reporters.

Frank Jordans in Berlin contributed to this report.