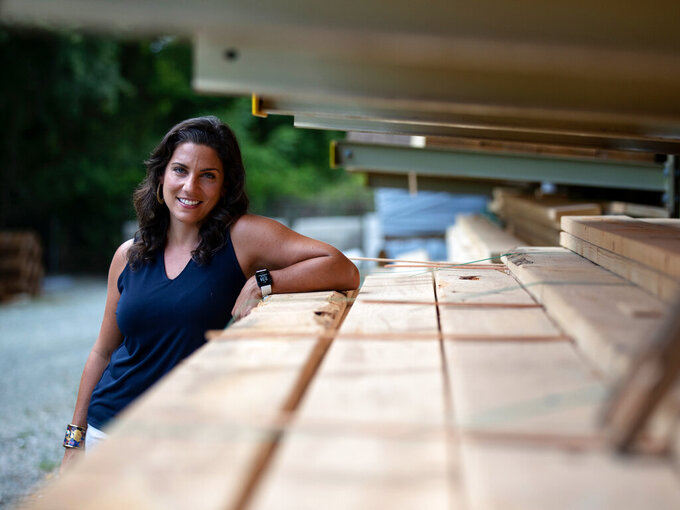 Kaitlin McKeown, ASSOCIATED PRESS
Nora El-Khouri Spencer, founder and CEO of Hope Renovations, is photographed outside of the organization's workshop and training facility in Carrboro, N.C., Thursday, July 28, 2022. “Our mission is to change the gender make-up of this industry and ensure that people that aren’t represented [can] have these great career opportunities,” said Spencer, who earned bachelor’s and master’s degrees from UNC-Chapel Hill. (Kaitlin McKewon/The News & Observer via AP)

CARRBORO, N.C. (AP) — Nora El-Khouri Spencer sometimes tells people that she started her nonprofit Hope Renovations because she got mad.

She had picked up construction and home renovation as a hobby while working a corporate job at Lowe’s and after an expensive contractor job-gone-wrong at her first home with her husband. Spencer bought a few power tools with her employee discount and turned to YouTube to learn how to do her own home renovations.

As she and her husband bought and renovated more houses over time, she followed contractors around and asked them to teach her what they were doing.

But then she realized: After years in home renovation, she had never met another woman in the field. All the general contractors she worked with, many making six-figure salaries, were men.

“I got mad that I never saw women doing it, and also that it was never presented to me as an opportunity,” Spencer told The News & Observer. “Why was this not something that I ever knew about? And I think that made me realize the change that I could be a part of help bringing about.”

“Our mission is to change the gender make-up of this industry and ensure that people that aren’t represented (can) have these great career opportunities,” said Spencer, who earned bachelor’s and master’s degrees from UNC-Chapel Hill.

Hope Renovations, a nonprofit organization based in Carrboro, offers a free, 12-week trades training program for women and nonbinary individuals to learn the construction and professional skills they need to land a well-paying job or apprenticeship in construction or to pursue further training.

The program teaches core construction skills, such as blueprint reading, construction math, safety and basic carpentry, while also training participants in networking, resume and cover letter writing, communication skills, conflict resolution and more. Trainees can then move on to Construction 101, which gives a taste of all the major construction trades, from carpentry and electrical to plumbing and roofing.

While the program is free to all trainees, the nonprofit also offers case management services to connect participants with resources ranging from childcare to transportation and housing. This support is key to what Hope Renovations offers.

“It’s one thing to give them the skills, but to really create that confidence that they can go out there and do this and then have the support to be successful at it — that was really what we wanted to pull together,” Spencer said.

Spencer, and the program, have received accolades and national recognition. This May, CNN named Spencer one of the network’s CNN Heroes, a regular feature that pays tribute to “everyday people doing extraordinary things to change the world.”

Hope Renovations goes beyond helping participants launch a new path for themselves.

They also get to practice what they learn on site alongside Hope Renovation’s professional construction crew, which is made up entirely of women and nonbinary individuals. The team focuses on small- to mid-sized home repairs — projects that typical construction firms might pass up to work on bigger projects.

That’s the other side to the organization’s mission: to enable senior citizens and adults with disabilities to “stay in their homes comfortably and safely as they age,” a concept Spencer learned about while obtaining her master’s in social work. These services are offered on a sliding scale

Since the nonprofit launched in June 2020, 50 people have graduated from the program, according to Spencer. A majority have since found jobs in the industry.

Moving forward, Hope Renovation plans to a pilot a fully Spanish-speaking cohort, and is looking into potentially offering childcare options for trainees and expanding its nighttime class offerings. Spencer hopes to expand Hope Renovations to provide services throughout the Triangle, and eventually, the country.