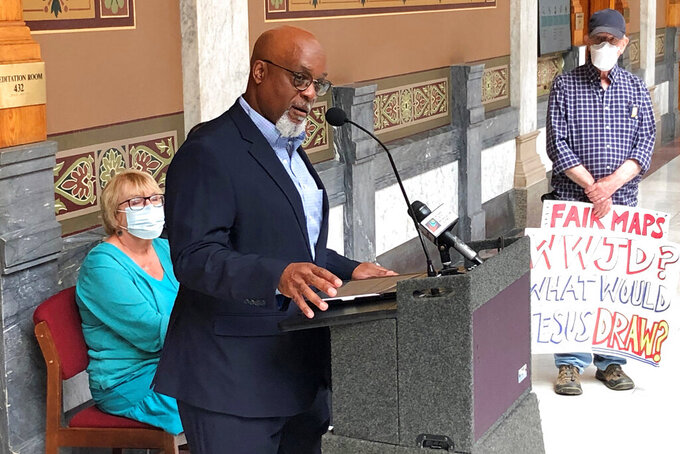 Tom Davies, ASSOCIATED PRESS
The Rev. David Greene, a Baptist minister who is president of the Concerned Clergy of Indianapolis civil rights group, speaks during a news conference with other religious leaders at the Indiana Statehouse on Wednesday, Sept. 1, 2021 in Indianapolis. Those religious leaders denounced potential gerrymandering by Republicans who control the state Legislature, saying that it threatened to limit the influence of the state's growing minority populations in state government.(AP Photo/Tom Davies)

INDIANAPOLIS (AP) — Indiana’s significant population shifts over the past decade mean rural areas will lose seats in the state Legislature while Indianapolis and its surrounding suburbs will gain influence.

Republicans, however, can be expected to use their iron-clad control of the once-a-decade redistricting process to draw new election districts for Indiana House and Senate seats that help maintain their commanding majorities in the General Assembly.

Democratic Rep. Sue Errington knows that the Muncie district she first won in 2012 could be on the chopping block when Republicans release on Tuesday the proposed new Indiana House and U.S. House maps that they’ve drawn behind closed doors.

Errington’s district lost 7% of its population since 2010 for one of the largest drops among the 100 Indiana House seats, according to a census analysis by City University of New York. It is surrounded by Republican-held districts that also lost population and have to gain territory, making Errington a potential target.

“If they were ready to get rid of me, it would be pretty easy,” Errington said.

Voting-rights activists argue that partisan gerrymandering has helped Indiana Republicans gain outsized power in state government. Over the past decade, Republicans have ousted all Democrats from rural legislative districts across the state as they’ve built majorities of 71-29 in the House and 39-11 in the Senate.

Republicans have used the full legislative supermajorities they’ve held since the 2012 elections to advance issues such as expanding state funding of vouchers for students attending private schools, toughening anti-abortion laws and approving the contentious state religious objections law in 2015.

Republicans might have to shed some of their rural districts as more than half of the state’s 92 counties lost residents over the past decade. But the fastest-growing areas are also friendly Republican territory, with all five state House districts that grew by more than 20% being GOP-held seats in suburban Indianapolis.

“You’re definitely going to see some of these districts that already have quite a few counties, probably gain a few more counties and expand,” Wesco said.

Republicans plan to move quickly to approve the new districts, with the House elections committee holding two days of public hearings Wednesday and Thursday followed by votes in the full House next week. Proposed state Senate maps are set for release Sept. 21, with a final Senate vote expected Oct. 1.

Democrats and voting-right activists have criticized that fast-tracked process as giving the public little time to study and comment on the new maps.

While Democratic-leaning Indianapolis and Marion County gained more people than any other Indiana county, the new district maps from Republicans will likely combine parts of the city with outlying suburban and rural areas in order to dilute the Democratic vote, said Charles Taylor, a member of the unofficial Indiana Citizens Redistricting Commission organized by voting-rights groups.

“There’s no reason to expect that they won’t want to just kind of double down on that,” said Taylor, who is a political science professor at Ball State University. “But they’re going to have to do it even more aggressively, because of the growth in the urban areas and the population decline in the rural areas.”

Several religious leaders recently gathered at the Indiana Statehouse to denounce gerrymandering, saying that it threatened to limit the influence of the state’s growing minority populations in the Legislature.

“Ultimately, you’re suggesting that some people do not have the same image of God that is in you,” said the Rev. David Greene, a Baptist minister who is president of the Concerned Clergy of Indianapolis civil rights group. “We must understand that gerrymandering is political and theological idolatry.”

Population losses in four Indiana House districts in northern Lake County now held by Black Democrats could cut into minority representation, even as Black population’s share in the state grew from 9.0% in 2010 to 9.4% in 2020 and the Hispanic share grew from 6.0% to 8.2%.

“If you eliminate voices, I think that makes the state weaker," Harris said.

Errington, the Muncie legislator, said she felt “the handwriting is on the wall” on the intentions of Republicans but that she was encouraged by greater public attention on redistricting as several hundred people attending public hearings around the state last month.

“My hope is that the public voice will have some influence,” Errington said. “Maybe that will give some pressure to moderate some of their tendencies on gerrymandering.”