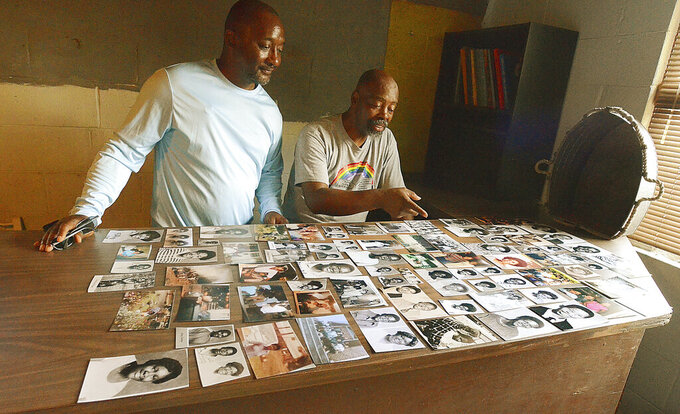 NEWTON, N.C. (AP) — It’s hard to believe now that the rundown, one-story building near the intersection of Rhoney School Road and Tipps Road, about a mile from N.C. Highway 10 was once “the happening spot on the weekends.”

But that’s exactly how Roger Shuford remembers the site back when it was known as Propst’s Place.

Propst’s was the neighborhood store during the day, but at night it would transform into a juke joint where adults would gather to listen to music from the jukebox situated near the door, dance and socialize.

Shuford, 55, now lives in Maryland but he makes trips back to his old neighborhood. While he was in town on recently, he paid a visit to the old Propst’s site to see what his friend Thomas Tipps had done with the place.

Tipps, 59, grew up in the house adjacent to Propst’s and he just bought the building last year.

Lately, he’s spent much of his time and money — he estimates about $60,000 at this point — in transforming the site into what he calls “a community time capsule.”

Tipps notes there’s still plenty he needs to do, from adding a deck and ramp to better accommodate people with disabilities to adding a central heating and air system.

Still, it’s impossible to miss the changes Tipps has already made to the building.

He set up a series of stall-like compartments to one side of the building and built replicas of older-style rooms. These include a vintage kitchen, living room with standing record player and representation of a church complete with pulpit and piano.

There is at least one modern touch. Tipps installed an Echo Dot in the record player. Those visitors eager to add a soundtrack to their experience are able to ask Alexa to play the songs of their choice.

Old photos taken mainly from yearbooks are placed on the two booths near the center of the room and on a counter. Behind the counter, there’s a bookshelf with Fred T. Foard High School yearbooks dating from the 1960s to the early 1990s.

Tipps hopes the new place, which he calls Rhoney’s, will allow older people to find comfort in reconnecting with the past.

“When they come in here, all those things will go back out the door, the illnesses and all that, because when they sit down and they look and they say, ‘Wait a minute, here’s a picture of my great-grandpa. I’ve never seen it,’ or ‘My cousin, I never met this cousin,’ and it takes you into another place of thought,” Tipps said.

Shuford was impressed with the changes to the building.

“He has the rooms built just like the houses used to look back in the day growing up here and so it’s absolutely amazing,” Shuford said. “I applaud him every day for what he’s done.”

Both Shuford and Tipps said the building could also be valuable for younger people to learn about history in the area as well.

Historically, the neighborhood along Rhoney School Road was predominantly Black, though Tipps said the area has been diversifying. And Tipps’ time capsule features many photos from Central High School, the segregated high school in Newton that served Black students in the community until its closure during integration in 1967.

However, Tipps does not see Rhoney’s as a haven for just the Black community.

Tipps’ own excitement for the project and powerful sense of nostalgia about his community and that building in particular are palpable.

He grins as remembers the times he would come into Propst’s from peeling potatoes and would have lunch in the store. When he was short on money, Gertrude “Bootsy” Propst would give him credit for a piece of candy and allow him to pay later.

Even during the later hours on weekends when the partying started at Propst’s and the younger people were not allowed in, Tipps would try to get a glimpse of what was going on by cracking the window beside his bed on the top bunk.

The revelry at Propst’s was a far cry from the environment in Tipps’ home, where his mother would not even allow a radio.

Tipps said he found unopened bottles and cans of beer from Propst’s in the building when he was going about making his upgrades.

While the location’s days of serving wine, beer and liquor seem firmly in the past, Tipps is intent on making sure that people who come out to the time capsule have refreshments.

“I love baking, and when they come to visit, well, ‘Do you want some bread pudding or apple pie?,’” Tipps said. “I’m not charging you for it. We’re going to sit and eat and have a good time, and you go on.”