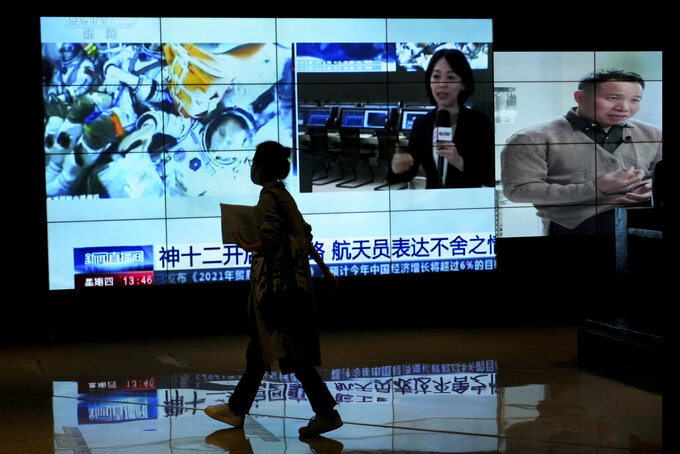 BEIJING (AP) — Three astronauts who lived for 90 days on China's space station departed Thursday in preparation for returning to Earth.

State broadcaster CCTV aired footage of the astronauts securing packages inside their spacecraft, which is due to parachute to a location in the Gobi Desert near the Jiuquan launch center on Friday.

The astronauts have already set China’s record for the most time spent in space. After launching on June 17, mission commander Nie and astronauts Liu and Tang went on two spacewalks, deployed a 10-meter (33-foot) mechanical arm, and had a video call with Communist Party leader Xi Jinping.

Before the undocking, the astronauts downloaded data from their experiments and ensured the station would continue operating without a crew, CCTV reported.

The journey home is expected to take at least 30 hours, CCTV said. Before departing, Nie and his colleagues expressed their thanks for the “round-the-clock support and devotion from all the staff.”

Four drills have been conducted on the ground at the Dongfeng landing site in north China’s Inner Mongolia Autonomous Region to ensure the safe return of the crew.

While few details have been made public by China's military, which runs the space program, astronaut trios are expected to be brought on 90-day missions to the station over the next two years to make it fully functional.

The government has not announced the names of the next set of astronauts nor the launch date of Shenzhou-13.

China has sent 14 astronauts into space since 2003, when it became only the third country after the former Soviet Union and the United States to do so on its own.

When completed with the addition of two more modules, the station will weigh in at about 66 tons, a fraction of the size of the International Space Station, which launched its first module in 1998 and will weigh around 450 tons when completed.

In preparation for the permanent station, China launched two experimental modules over the past decade.Tiangong-1 was abandoned before it burned up during an uncontrolled loss of orbit. It’s successor, the Tiangong-2, was brought out of orbit in 2018 under full control.

China launched its bid to build such facilities in the early 1990s following successes in earlier missions and its exclusion from the International Space Station, largely due to U.S. objections over the Chinese program’s secretive nature and close military ties.

U.S. law requires congressional approval for contact between the American and Chinese space programs, but China is cooperating with space experts from other countries, including France, Sweden, Russia and Italy.

China has also pushed ahead with un-crewed missions, particularly in lunar exploration. It has placed a rover on the little-explored far side of the Moon and in December, the Chang’e 5 probe returned lunar rocks to Earth for the first time since the 1970s.

China this year also landed its Tianwen-1 space probe on Mars, with its accompanying Zhurong rover venturing out to look for evidence of life.

Another program calls for collecting soil from an asteroid, something that has been a particular focus of Japan’s rival space program.

China also plans to dispatch another mission in 2024 to bring back lunar samples and has expressed a desire to land people on the moon and possibly build a scientific base there, although no timeline has been proposed for such projects. A highly secretive space plane is also reportedly under development.

China's space program has advanced in a steady, cautious manner and has largely avoided the failures that marked the U.S. and Russian programs that were locked in intense competition during the heady early days of spaceflight.