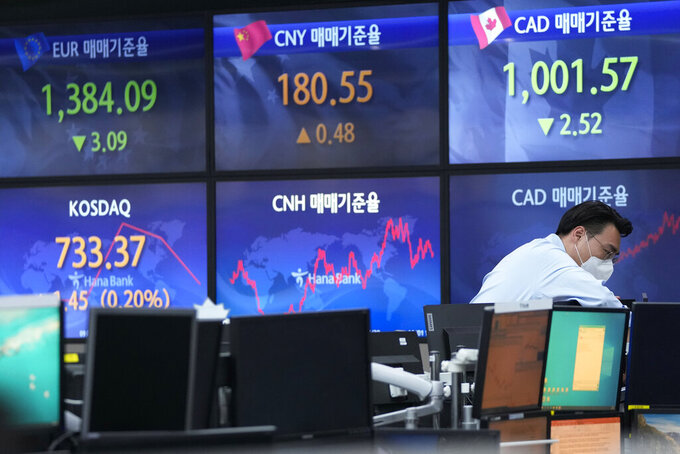 All the major U.S. stock indexes ended with a weekly loss after a Fed official, James Bullard, rattled investors by suggesting the U.S. central bank's base lending rate might have to be raised to as much as almost double its already elevated level.

“Bullard dimmed the light on rallies,” said Tan Boon Heng of Mizuho Bank in a report.

The Hang Seng in Hong Kong dropped 3.02% to 17,448.64 after the territory's leader, John Lee, tested positive for the coronavirus after returning from an Asia-Pacific meeting in Bangkok.

All the major U.S. indexes ended with a loss for the week after Bullard, president of the St. Louis Federal Reserve Bank, gave a presentation that indicated the Fed's benchmark rate might have to rise to between 5% and 7%. That would be up from its current level of 3.75% to 4% following four hikes of 0.75 percentage points, three times the Fed's usual margin.

Investors worry repeated rate hikes by the Fed and central banks in Asia and Europe this year to cool surging inflation might tip the global economy into recession.

Traders hope signs economic activity is slowing and inflation pressures easing might prompt the Fed to ease off its plans. Fed officials including chair Jerome Powell have warned rates might need to stay high for an extended period to extinguish inflation.

Traders expect the Fed to raise its key rate again at its December meeting but by a smaller margin of 0.5 percentage points.

U.S. retail sales rose 1.3% in October in a sign of consumer confidence ahead of Christmas shopping. Still, with inflation high, major retailers say Americans are holding out for sales and refusing to pay full price.