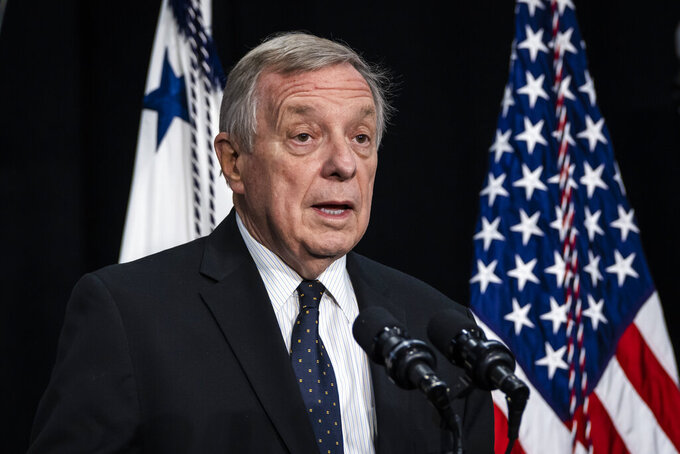 Harry Marino on Wednesday asked the Senate Judiciary Committee to pursue a “Minor League Curt Flood Act” in response to a letter from the four-member committee, chaired by Sen. Dick Durbin, an Illinois Democrat. The letter sent by the committee on June 28 asked the advocacy group about the effect of baseball's 100-year-old antitrust exemption on working conditions in the minor leagues.

Applying antitrust law to the employment of minor league players could allow them to seek free agency sooner, strengthening their leverage to ask for better salaries and other working conditions.

Marino's letter to Congress was obtained Thursday by The Associated Press.

Advocates for Minor Leaguers has pushed in recent years to improve pay, housing and other employment standards for players who generally make between $4,800 and $15,400 annually.

Those players are subject to Uniform Player Contracts when they enter professional baseball, preventing them from becoming minor league free agents for seven seasons. Marino argued that those UPCs keep players from seeking salaries beyond the MLB-mandated league minimums, ranging from $400 to $700 per week, paid only in season.

Marino argued that a Minor League Curt Flood Act would threaten the legality of the minor league UPCs.

“Upon being drafted, players would be able to negotiate the length and terms of their initial minor league contracts with their major league teams,” Marino wrote.

Because baseball's amateur draft and international signing period are covered by collective bargaining with the major league players' association, those structures would remain even with a Minor League Curt Flood Act. But it's unclear how the sport's minor league system would operate if players were freed from UPCs.

Contracts at the major league level are governed by rules collectively bargained between MLB and the players' association. There is no minor league union.

In its June 28 letter, the committee also asked Marino about the effects of repealing the Save America's Pastime Act, a provision included on page 1,967 of a $1.3 trillion spending bill in 2018 that exempted minor league players from federal minimum wage requirements. The bill was an attempt to pre-empt a lawsuit filed four years earlier by players alleging MLB violated the Fair Labor Standards Act.

The suit was settled in April. Two people familiar with the negotiations, speaking to The Associated Press on condition of anonymity because the release of details was not authorized, said the possible settlement was in the $200 million range. The two sides asked a federal court in California for permission to file by July 11 for approval of the settlement.

In its initial letter, the committee noted that MLB claimed the Save America's Pastime Act “was necessary to prevent minor league contraction.” Despite its passing, MLB still pulled affiliation from 40 of 160 teams after the 2020 season.

Marino recommended that Congress repeal the Save America’s Pastime Act, which “would allow minor league players to sue under the federal minimum wage and overtime laws.”

The other members of the committee that sent Marino the letter in June are Sen. Charles Grassley, R-Iowa; Richard Blumenthal, D-Connecticut; and Mike Lee, R-Utah.

Baseball's antitrust exemption was created by the U.S. Supreme Court in a 1922 case involving the Federal League, when Justice Oliver Wendell Holmes wrote in a decision that baseball was not interstate commerce but exhibitions exempt from antitrust laws. The Supreme Court reaffirmed the decision in a 1953 case involving New York Yankees farmhand George Toolson and in the 1972 Curt Flood decision, saying any changes should come from Congress.

Perhaps the biggest impact of the exemption is that it allows MLB to prevent a franchise from moving to a different city without MLB permission. Marino noted that passing a Minor League Curt Flood Act would have a “more limited impact” than fully repealing MLB's antitrust exemption.

The U.S. Justice Department filed a statement of interest last month in a lawsuit filed by four minor league teams urging that “lower courts should limit the ‘baseball exemption’ to conduct that is central to the business of offering professional baseball games to the public.” The lawsuit, filed by teams that lost their big league affiliations when MLB cut the minors before the 2021 season, is pending in U.S. District Court in Manhattan.

MLB did not immediately respond to a request for comment.