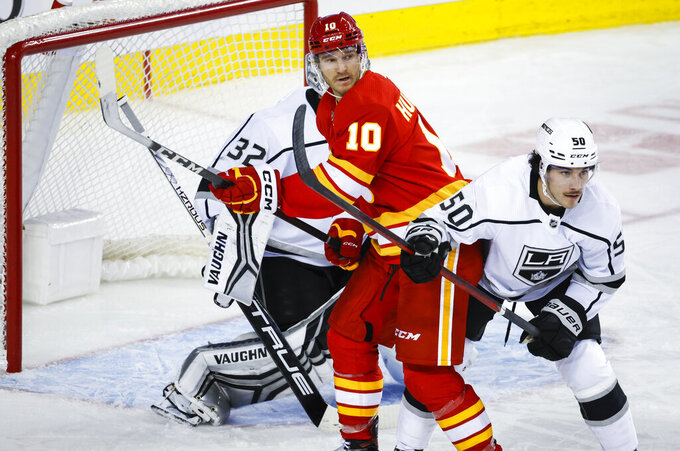 CALGARY, Alberta (AP) — After losing 100-point scorers Johnny Gaudreau and Matthew Tkachuk in the offseason, it has taken a while for Elias Lindholm to find chemistry with new linemates. It's finally starting to come together.

Lindholm and Tyler Toffoli each had a goal and two assists, Adam Ruzicka added a goal and an assist, and the Calgary Flames held on to beat the Los Angeles Kings 6-5 on Monday night.

“He’s one of the best players in the league and just fortunate to be playing with him,” Toffoli said of Lindholm. “The past week or two I think he’s really took his game to the next level and it’s been fun to play with him.”

Ruzicka, who joined the line after Jonathan Huberdeau went down with an injury, has also fit in nicely with Lindholm and Toffoli. The 23-year-old has five points in his last four games.

“We’re having fun, making plays and scoring some goals," Lindholm said. “Obviously, Adam’s come in and he’s a good player. He’s still a young kid, but he’s been playing well.”

Arthur Kaliyev scored twice, Kevin Fiala had a goal and an assist, and Adrian Kempe and Anze Kopitar also scored for the Kings, who had won four straight. Drew Doughty had two assists and Jonathan Quick finished with 23 saves.

Markstrom preserved the win with a sprawling save on a shot by Kopitar from 10 feet out with 22 seconds remaining.

“We played one of our worst games defensively,” Kings center Phillip Danault said. “We gave up too many rushes. We did that to ourselves. We lost the game in the first period. We weren’t sharp enough mentally.”

Trailing 2-1 midway through the first period, the Flames scored four consecutive goals to pull ahead.

Calgary tied it with 9:05 left after Kadri's shot deflected to the left circle and Mangiapane pounced on the puck, spun and fired a shot past Quick for his third.

Just 42 seconds later, Ritchie forced a turnover in the Kings' end and completed a give-and-go with Blake Coleman and put the return pass past Quick on the right side.

Toffoli's one-timer made it 4-2 with 3:35 left in the opening period and Lindholm's power-play goal at 1:51 of the second gave the Flames a three-goal lead.

Fiala got Los Angeles to 5-3 with 5:34 left. However, Toffoli and Lindholm set up Ruzicka 2:10 later to restore Calgary's three-goal lead.

Kopitar scored at 8:57 of the third, and Kempe pulled the Kings within one with 1:19 left and Quick pulled for an extra skater.

With just one goal in his first 11 games, Huberdeau opened the scoring at 3:49.

“It was good. I mean, obviously, to get a goal. It had been a while,” said Huberdeau, who played alongside Mikael Backlund and Trevor Lewis. “We kept things simple. We had some scoring chances. In the first period, we were always in their zone. We worked to cycle the pucks. I loved playing with these guys.”

Kaliyev scored twice in a 1:18 span to give the Kings a 2-1 lead a little more than six minutes in.

Huberdeau’s goal was the 200th of his career. He’s the eighth player from the NHL’s 2011 draft class to reach that mark. ... Kadri’s two assists gave him 300 for his career, the seventh member of the 2009 draft class to hit that total. ... Flames defenseman Nikita Zadorov played in his 500th career game.

Andersson hadn’t topped 17 assists in a season before a career year last season saw him finish with 46. This season, the 26-year-old Swede has 12 in 15 games.

Kings: At Edmonton on Wednesday night.