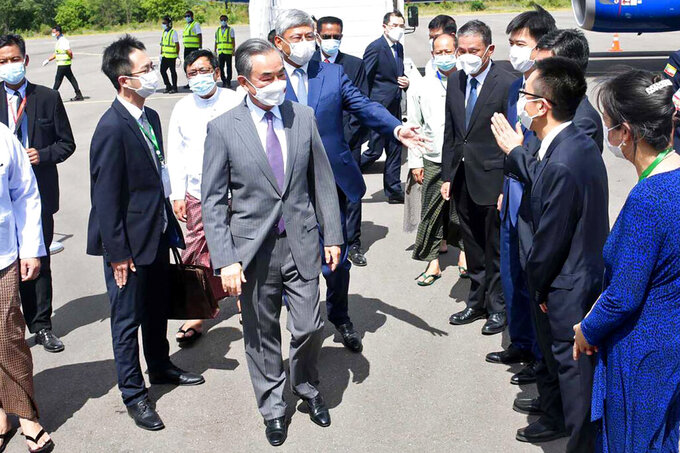 Uncredited, ASSOCIATED PRESS
FILE - In this photo provided by the Myanmar Ministry of Information, Chinese Foreign Minister Wang Yi, center, is welcomed by Myanmar Foreign Ministry representatives and Chinese embassy officials upon his arrival at Nyaung Oo Airport in Bagan, Myanmar, Saturday July 2, 2022. A regional meeting between foreign ministers of China and some Southeast Asian countries took place in Myanmar Monday, July 4, 2022, hosted by the military government which claims that it was a recognition of its legitimacy but opponents protested as a violation of peace efforts. (Myanmar Ministry of Information via AP, File)

State broadcaster MRTV reported that Wang met with his colleagues from Myanmar, Laos, Thailand, Cambodia and Vietnam in the Lancang-Mekong Cooperation group meeting, held under the theme “Solidarity for Peace and Prosperity” in the central city of Bagan, a UNESCO World Heritage site.

The TV report showed Wang and the other foreign ministers bumping elbows in a show of solidarity before the start of the meeting, but did not provide further details.

The grouping is a Chinese-led initiative that includes the countries of the Mekong Delta, a potential source of regional tensions due to an increasing number of hydroelectric projects that are altering the river's flow and raising concerns about ecological damage. China has built 10 dams along the upper stretch of the Mekong, the part it calls the Lancang.

China has been criticized for the dams, which affect water levels and downstream fisheries that are important to several Southeast Asian nations’ economies.

Military government spokesman Maj. Gen. Zaw Min Tun said last Friday that the ministers were expected to sign several agreements. He said the presence of the foreign ministers was a recognition of Myanmar’s sovereignty and its government.

China is Myanmar’s biggest trading partner and an old ally. Beijing has invested billions of dollars in Myanmar’s mines, oil and gas pipelines and other infrastructure and is its major arms supplier, together with Russia.

Many in Myanmar suspect China of supporting the military takeover, and Beijing has refused to condemn the army’s power grab. China says it follows a policy of non-interference in other countries’ affairs.

Myanmar's shadow National Unity Government, which opposes the ruling military council, protested the Bagan meeting, saying any such efforts in partnership with Myanmar’s military violate the will of the people and undermine community building.

It said that holding the meeting in Myanmar is in direct opposition to a peace plan by the Association of Southeast Asian Nations. Myanmar's rulers have stymied ASEAN's efforts to organize a meeting with ousted civilian leader Aung San Suu Kyi, who was recently moved to solitary detention.

Suu Kyi's ouster in February 2021 triggering widespread peaceful protests that were violently suppressed and evolved into armed resistance, and the country has slipped into what some U.N. experts characterize as a civil war.

The statement said Wang told Prak Sokhonn that China expects to work with ASEAN to push Myanmar in pursuit of political reconciliation and encourage it to restart a democratic transition and realize the vision of returning power to the people. It said China supports Myanmar in exploring the development path that suits its own national conditions.

Wang told Wunna Maung Lwin that China will assist Myanmar in safeguarding its legitimate interests and national dignity in the international arena, according to China’s official Xinhua News Agency.