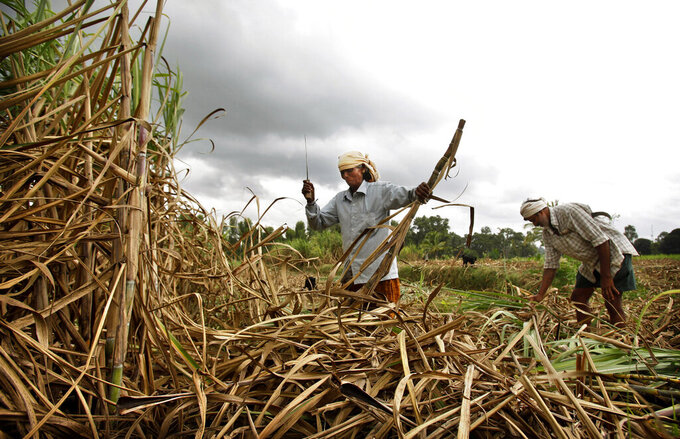 Aijaz Rahi, ASSOCIATED PRESS
FILE- Indian farmers harvest sugarcane in their field near Mandya about 110 kilometers (69 miles) southwest of Bangalore, India, Monday, Aug. 6, 2012. India is restricting sugar exports to 10 million tons in the current season in 2022 to help maintain domestic availability and keep prices stable. India is the second-largest producer, after Brazil, and biggest consumer of sugar in the world, according to the All India Sugar Trade Association. It's the second-largest exporter of sugar. (AP Photo/Aijaz Rahi, File)

The decision follows a similar measure for wheat and comes amid signs of tightening world supplies.

Estimates vary but the country is expected to produce more than 30 million tons in this growing season, and domestic consumption is estimated at about 28 million tons, with domestic reserves at roughly 8 million tons.

In the current June-October sugar season, contracts for export of about 9 million tons have been signed and 7.8 million tons were already exported, the government said in a statement.

Sugar mills and exporters will need to government approval for exports beginning next month, it said.

Sugar consumption tends to shoot up during India's major festival season from September to November.

Sugar prices have remained relatively stable but retail inflation rate surged to an eight-year high of 7.8% in April. The government has announced tax cuts on petrol, diesel, coking coal to try to curb inflationary pressures.

Earlier this month, India also announced that it would export wheat to food-deficit countries only through government channels. It is allowing private companies to meet previous commitments to export nearly 4.3 million tons of wheat through July. India exported 1 million tons of wheat in April.

A key aim of restrictions on exports is to control rising domestic prices. Global wheat prices have risen by more than 40% since the beginning of the year. Meanwhile, India’s own wheat harvest was hit by a record-shattering heat wave that has stunted production.

Before the war, Ukraine and Russia accounted for a third of global wheat and barley exports. Since Russia’s Feb. 24 invasion, Ukraine’s ports have been blocked and civilian infrastructure and grain silos have been destroyed.