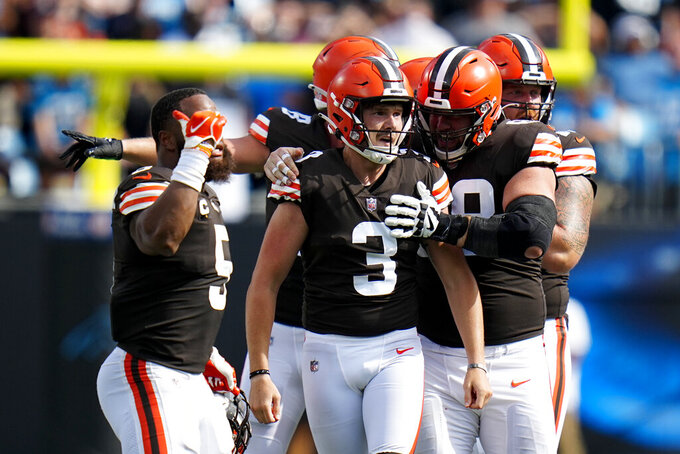 OPENING LINE: Browns by 5 1/2, according to FanDuel SportsBook.

TURNOVER DIFFERENTIAL: Jets minus-1; Browns plus-1.

JETS PLAYER TO WATCH: LT George Fant. He has the unenviable task of blocking Browns All-Pro DE Myles Garrett, who had two sacks in the opener. Fant struggled last week after the Jets hastily switched him from right to left when Duane Brown went down with a shoulder injury. Joe Flacco was sacked three times and hit 11 by Baltimore.

BROWNS PLAYER TO WATCH: WR Donovan Peoples-Jones. The Browns have been waiting for someone to emerge as a dependable No. 2 receiver behind Amari Cooper, and Peoples-Jones stepped up last week with a team-high six catches for 60 yards. Several of the receptions were in tight coverage.

KEY MATCHUP: Fant vs. Garrett. The Jets will likely give Fant help by double- and triple-teaming the Browns' star rusher, who is used to the extra attention. Garrett needs just 1 1/2 sacks to tie Clay Matthews' career team record (62).

SERIES NOTES: The Jets have a chance to tie a series that has had several memorable moments, including in the playoffs. ... The teams first met on Sept. 21, 1970, in the first “Monday Night Football” game. The Browns sealed their win by intercepting Joe Namath late. ... The Browns are 3-1 in four overtime games with the Jets. ... Cleveland beat New York in two OTs in the AFC divisional playoffs in January 1987. A roughing-the-passer penalty on Jets DE Mark Gastineau kept alive a late TD drive by the Browns, who trailed 20-10 in the fourth.

STATS AND STUFF: The Jets are in a September swoon, losing 13 straight games in the month. Their previous September win was Sam Darnold’s NFL debut in Week 1 in 2018. ... New York continues its trip through the AFC North. After starting with Baltimore, the Jets are in Cleveland, host Cincinnati and play at Pittsburgh. ... Flacco’s previous start against Cleveland was a loss in 2018 with Baltimore. His 17 wins against the Browns are by far his most wins vs. any team. ... Flacco tied a career high with 59 passes last week. He completed 37 for 307 yards with one TD and one INT. ... Flacco is 0-6 as a Jets starter. ... The Jets went 2 of 14 on third-down conversions against the Ravens. ... The Jets mostly contained Lamar Jackson (17) and held the Ravens to 63 yards rushing. ... New York is using a rotation of defensive linemen to keep the big guys up front fresh. Nine D-linemen played against the Ravens. ... CB Ahmad “Sauce” Gardner, the No. 4 overall pick in April, allowed just an 8-yard catch and broke up a potential TD pass in his opener. ... WR Garrett Wilson, the No. 10 overall pick, caught four passes for 52 yards. ... The Browns are 1-0 for the first time since 2004. They most recently started 2-0 in 1993, when Bill Belichick was Cleveland's coach. ... The Browns rushed for 217 yards last week with Nick Chubb gashing the Panthers for 141 on 22 carries. ... RB Kareem Hunt scored two TDs — one rushing, one receiving. ... Chubb and Hunt were on the field together for several plays. It's a formation the Browns weren't able to go to much last season because of injuries. The package puts added stress on a defense because both backs can rip off big plays. ... QB Jacoby Brisett didn't make any mistakes in his Browns' debut last week, and he's expecting to play better after an emotional first game. Brissett is starting while Deshaun Watson serves his 11-game NFL suspension for alleged sexual misconduct. ... Browns rookie K Cade York made four field goals last week, including a game-winning 58-yarder with 8 seconds left. York's kick was the longest in league history by a first-year kicker in Week 1.

FANTASY TIP: Hunt has a nose for the end zone, and his catching ability makes him a red zone target on swing-out passes and screens. He scored five TDs in just eight games last season, and he's now more motivated while seeking another contract extension.