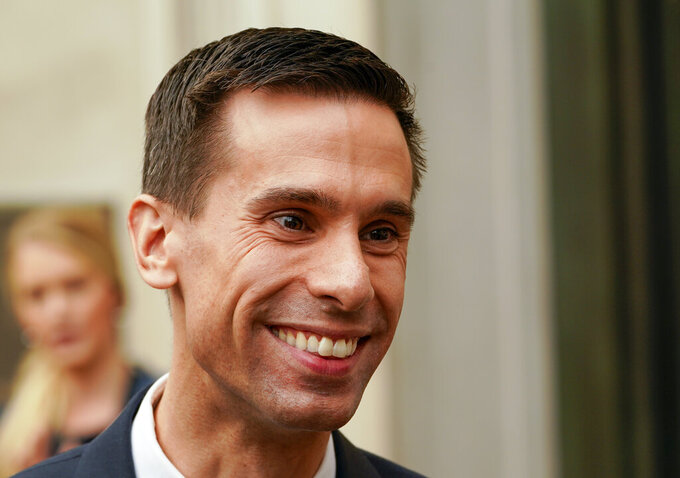 Steve Helber, ASSOCIATED PRESS
Attorney for the Alliance Defending Freedom, Chris Schandevel, speaks outside the Supreme Court of Virginia after arguing the case for West Point Virginia high school teacher Peter Vlaming Friday, Nov. 4, 2022, in Richmond. Va. Vlaming who was fired for refusing to use a transgender student's preferred pronouns sued West Point Public Schools. Vlaming says his rights to speak freely and exercise his religion were violated and is appealing a ruling dismissing his lawsuit. (AP Photo/Steve Helber)

RICHMOND, Va. (AP) — Lawyers for a high school French teacher who was fired after he refused to use a transgender student's pronouns argued before the Supreme Court of Virginia Friday that the school violated his constitutional right to speak freely and exercise his religion. An attorney for the school said the teacher violated the school's anti-discrimination policy.

Peter Vlaming sued the school board and administrators at West Point High School after he was fired in 2018. Vlaming appealed a lower court's ruling dismissing the lawsuit and asked the Supreme Court to reinstate it.

Vlaming's lawsuit was brought by Alliance Defending Freedom, a conservative Christian legal advocacy group that has filed six similar lawsuits — three in Virginia, and one each in Ohio, Kansas and Indiana.

ADF attorney Christopher Schandevel told the high court that Vlaming was not fired for something he said, but “for something that he couldn't say.”

“This is a case about compelled speech,” he said.

Schandevel told the justices that Vlaming tried to accommodate the student by using his masculine name and avoiding the use of pronouns, but the student, his parents and the school told him he was required to use the student's male pronouns.

In his lawsuit, Vlaming said he could not use the student’s pronouns because of his “sincerely held religious and philosophical” beliefs “that each person's sex is biologically fixed and cannot be changed." Vlaming also said he would be lying if he used the student's pronouns.

Justice Thomas Mann pushed back against the argument that using the boy's new name but not his pronouns would allow the teacher to avoid discriminating against him.

“What's the difference?” he said.

“So why is (Vlaming's) right not to lie more important than (the student's) right to basic education and to not be discriminated against,” Mann said.

Alan Schoenfeld, an attorney who represents the school board and school administrators, said Vlaming's speech was part of his official teaching duties and his refusal to use the student's pronouns clearly violated the anti-discrimination policy.

”A public school employee is not at liberty to declare that he will not comply with a neutrally applicable policy that is part of his duties as a classroom teacher," he said.

Justice Wesley Russell Jr. said that if Vlaming treated all students the same by using their names, but not their pronouns, “how does that discriminate?”

Schoenfeld said it's “inevitable” that pronouns would come into play in a classroom setting. Vlaming once inadvertently referred to the student as “she" in class, but immediately apologized.

After the hearing, Vlaming said he had hoped that he and the school board could have come to an agreement.

“I can disagree with my students without provoking my students. I'm there to teach French,” he said.

Vlaming said he was unable to get another teaching job in Virginia and eventually moved with his wife and children to France, where he now works as the director of purchasing for a publishing house.

The justices did not indicate when they expect to issue a ruling.

In another Virginia case filed by the ADF, the state Supreme Court last year affirmed a lower court ruling that required Loudoun County Public Schools to reinstate a teacher who was suspended after he spoke at a school board meeting in opposition to a proposed policy requiring teachers to use the pronouns used by transgender students. Litigation over the school district's policy on pronouns is still pending.

In a federal lawsuit filed by the ADF in Ohio, the 6th U.S. Circuit Court of Appeals ruled last year that Shawnee State University violated the free speech rights of philosophy professor Nicholas Meriwether when they disciplined him for refusing to use a transgender student's pronouns. In a settlement, the university agreed to pay $400,000 in damages and Meriwether's legal fees.