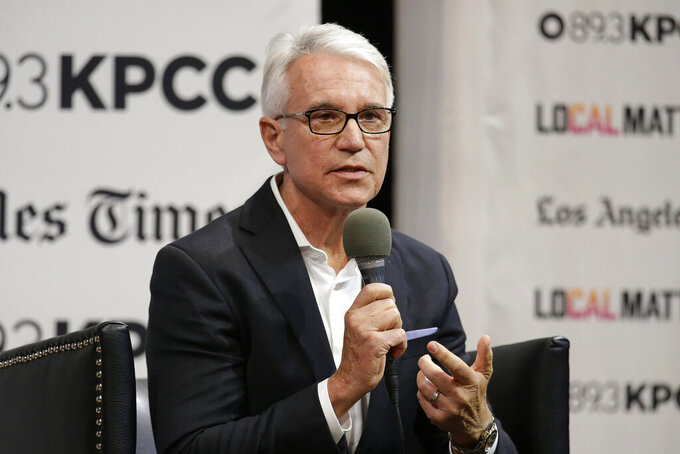 CLAIM: An online job ad shows that all new employees that the IRS intends to hire after a funding boost in the Inflation Reduction Act will be required to carry a firearm and use deadly force if necessary.

THE FACTS: The job description does not apply to most potential new employees that the IRS will hire in the coming years, and the vast majority of IRS workers are not armed. A legitimate job ad for special agents within the small law enforcement division of the IRS that works on criminal investigations was misrepresented online following the passage this month of a $740 billion economic package that includes nearly $80 billion for the IRS. Many posts in recent days shared a screenshot that features the IRS logo and the text, “Major Duties.” The listed duties on the image include being able to “carry a firearm and be willing to use deadly force, if necessary.” Social media users claimed that the image was a job ad for thousands of new IRS employees that will be hired as a result of the bill. “The IRS is looking to fill 87,000 positions,” one Facebook user who shared the image wrote. “Requirements include working min ‘50 hours per week, which may include irregular hours, and be on-call 24/7, including holidays and weekends’ and ‘Carry a firearm and be willing to use deadly force, if necessary.’” Another Twitter user wrote: “Want to be one of the new 87,000 IRS agents? Are you willing to carry a firearm and use DEADLY FORCE? This is not at all concerning.” These social media users are falsely depicting a legitimate job ad for a special agent with IRS Criminal Investigation as a generic ad for all new positions. While that language does not currently appear on the IRS web page advertising the special agent role, a search of the Internet Archive shows that the same language can be found on the page as recently as Aug. 11. Justin Cole, a spokesperson for IRS Criminal Investigation, told the AP that the screenshots circulating online appear to show the special agent web page and confirmed that the language had been on the site but was removed. He said it was removed in error amid the spate of misinformation about IRS employees carrying weapons, but the language will be added back to the web page. Special agents with IRS Criminal Investigation, who investigate criminal tax violations and other related financial crimes, are the only IRS employees who carry firearms, according to Anny Pachner, a spokesperson for the division. Special agents compose a small sliver of the IRS workforce. There are about 2,000 special agents within the agency, which has roughly 80,000 total employees. The division dates back to 1919 and has always employed armed agents. The agency is currently hiring 300 special agents, according to the online job posting. Among the agents’ duties are executing search and arrest warrants, as well as seizures, per the posting. This is very different from the work of other IRS employees. For instance, revenue agents work on complex audits of corporations, while customer service representatives answer tax-related questions, according to the IRS. Neither roles are law enforcement positions. The claim that the IRS is going to hire 87,000 new agents in general due to the Inflation Reduction Act is also misleading, as the AP has previously reported. The figure comes from a prior Treasury Department proposal to hire roughly that many IRS employees over the next decade, but there is no explicit mandate for such a workforce in the act, officials and experts say. Many new IRS hires will replace employees who are expected to retire or quit, and not all of them will be auditors, nor will a majority of them be gun-carrying agents.

THE FACTS: The virus that causes polio has been detected in New York sewage samples, not tap water. After the New York City and New York state health departments announced last week that poliovirus has been found in city sewage samples, a post claiming that polio had been found in the city’s tap water began spreading on social media. “Under Biden, they are now finding Polio in tap water,” reads the post, which received more than 112,000 likes on Instagram. It includes a screenshot of a tweet featuring a promotional video in which Mayor Eric Adams touts the city’s tap water. The tweet captions the Adams video: “Do you all remember that time when Mayor Adam’s told everyone in New York City to drink the tap water? Anyways, they found Polio in the New York City water.” But poliovirus was found in sewage samples, not tap water, and people cannot contract polio by drinking the city’s tap water, multiple city and state officials said. “New Yorkers should know that wastewater is not the same as drinking water, and it cannot be a source of infection or transmission,” Samantha Fuld, a spokesperson for the New York State Department of Health, told the AP in an email. Wastewater — used water from toilets, sinks, showers and household appliances — does not come in contact with the city’s drinking water, she said, adding there are no plans to test tap water for poliovirus. Edward Timbers, director of communications for the city’s Department of Environmental Protection, confirmed to the AP in an email that the city’s wastewater cannot end up in its tap water and that the presence of poliovirus in sewage samples does not imply that the virus is also in drinking water. “There are two separate systems in NYC,” he said. New York City drinking water is treated with purifying agents to ensure that it is safe to consume and free of pathogens, according to the city’s 2021 Drinking Water Supply and Quality Report. Polio can be spread through water contaminated with feces from an infected person, according to the U.S. Centers for Disease Control and Prevention, though it typically spreads through person-to-person contact. The state Department of Health began monitoring wastewater for signs of poliovirus through repeated sampling after a Rockland County, New York, resident developed paralysis as a result of poliovirus earlier this summer, Fuld said. According to the state agency, the CDC has confirmed the presence of poliovirus in sewage samples from New York City, Rockland County and New York’s Orange County. Dr. Kimberly Thompson, a polio expert and president of health nonprofit Kid Risk, Inc., explained that repeated samples of poliovirus found in wastewater are indicators that the virus is spreading, since it can be transmitted through an infected person’s feces. A similar false claim purporting monkeypox was found in Georgia drinking water also spread on social media this month.

THE FACTS: The county didn’t disqualify ballots or ballot signatures. It disqualified nearly 200,000 of about 716,000 signatures on petitions calling for a vote to recall Gascón. Los Angeles County election officials on Monday said that a proposal to recall the county’s progressive DA had failed after recall organizers did not gather enough valid petition signatures to schedule an election. Recall organizers needed to gather nearly 570,000 valid petition signatures to schedule an election, but county officials found only about 520,000 were valid after disqualifying nearly 200,000 signatures turned in. That news was misrepresented online this week when Donald Trump Jr. and others falsely claimed that the county had disqualified “ballots” or “ballot signatures.” The former president’s son made both claims, one on Twitter and one on his father’s Truth Social platform. “So in Los Angles they just disqualified almost 30% of ballot signatures BUT they expect you to believe that LESS THAN 1% of Ballots were faulty in the 2020 Presidential Election!” Trump Jr. tweeted Monday, misspelling Los Angeles. The petition signatures that the county deemed invalid were collected in the community to try to demonstrate voter support for scheduling a recall election. A Monday news release from the county said the signatures were found to be invalid for various reasons, including signers not being registered to vote, signing more than once, listing different addresses than their voter registrations, using signatures that didn’t match their voter registration signatures, and living outside the county. The recall committee said it would review rejected signatures and the verification process and “seek to ensure no voter was disenfranchised.” Joshua Spivak, an expert on recall elections and a senior fellow at the Hugh L. Carey Institute at Wagner College, said the signature rejection rate was “within the range” of past California recalls. He pointed out that most of the rejections happened not because of the signatures themselves, but because the signers were not registered voters or signed multiple times. A representative for the Trump Organization did not respond to a request for comment.

THE FACTS: Danish residents under the age of 18 will no longer be automatically eligible for COVID-19 vaccines, but there is no overall ban for that age group, as minors who are at high risk will still be able to get the shots after a medical assessment. Social media users are misrepresenting changes to the Danish Health Authority’s fall and winter vaccine program for those under 18 as a “ban.” “Denmark coming clean that kids shouldn’t be vaccinated with a TOTAL BAN on Covid vax for kids,” a Twitter user falsely claimed. But Denmark’s guidance around COVID-19 vaccines for children is only being modified. The agency’s vaccine program states that since children and young people “very rarely become seriously ill” from the COVID-19 omicron variant, those under the age of 18 will no longer receive the first dose beginning July 1. Starting Sept. 1, youths will no longer get the second dose, although those who are at risk of developing serious illness can still get the vaccine after a medical assessment. “The Danish Health Authority does not currently plan on recommending vaccination to persons under the age of 18 as a group,” Lotte Bælum, a spokesperson for the agency, told the AP in an email. “Children and young people who are at increased risk of a serious course of covid-19 will continue to have the option of vaccination after individual assessment.” The country will begin the fall and winter COVID-19 vaccination program in October. Around 81% of Denmark’s population of 5.8 million has received two doses of a COVID-19 vaccine and nearly 62% have received a booster, according to the Danish Ministry of Health. In April, the AP reported that due to Denmark’s high vaccine coverage, the country was ending broad vaccination efforts, but people over the age of 50 or older will receive invitations to receive a vaccine. The Danish Health Authority still recommends that people who are completely unvaccinated receive primary vaccination.